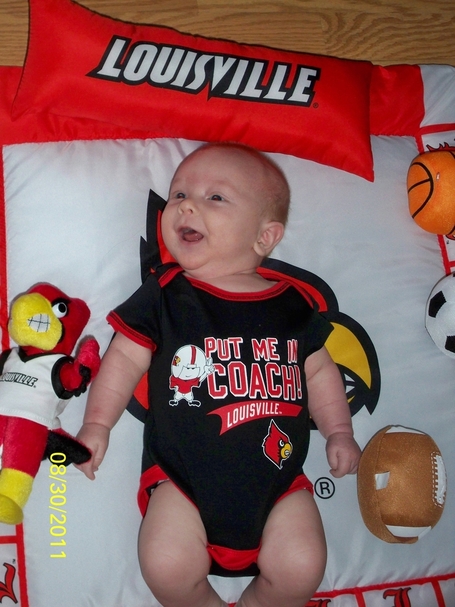 That's Samuel Reagan Gocke on the ones and the twos this Wednesday morning. Kid HATES Florida International.

Every major sportsbook has dropped the Louisville/FIU line from UL -4.5 to UL -4. Color me terrified.

The Golden Panthers are getting a lot of respect around the Internet heading into Friday night's nationally televised game.

Jake Layman, the No. 53 player in the 2012 class by ESPN.com, committed to Maryland after taking an official visit over the weekend. He also canceled planned visits to Florida, Louisville and Syracuse after deciding on the Terps.

So another forward's off the board.

One of Florida International's biggest strengths is its rush defense, a trait they hope serves them well on Friday night.

"At camp, all offseason, our main goal was to become a more physical team," said FIU linebacker Winston Fraser, who led the team with 11 tackles against North Texas. "I believe we proved that on Thursday."

Louisville slipped to last in the ESPN Big East power rankings after their lackluster performance in week one.

8. Louisville (1-0). The Cardinals looked the most ragged of all the league teams last week. They had four turnovers, 10 penalties and failed to score in the second half against FCS Murray State. That means a spot in the cellar for this week.

Class of 2012 commit Daqual Randall showing a bit of love. 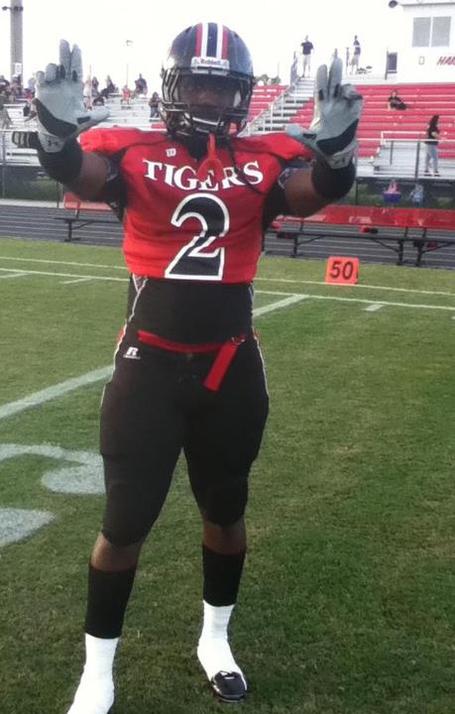 In "demand for material during the preseason is high, but we're only allowed to post so many preseason top 25s" news, Yahoo's Jason King has written a story about the hardest worker's in college basketball. He begins by featuring Connecticut center Alex Oriakhi, but also goes on to highlight Louisville's Peyton Siva.

Peyton Siva, Louisville, junior – The pesky Cardinals guard averaged two steals a game as a sophomore in 2010-11. That makes him in the league returning leader in that category. Siva’s defensive intensity helps make him the tone-setter for one of the conference’s top teams.

Just wait until the annual "most adorable" lists star getting churned out.

Jerry Palm of CBS has updated his 2011 bowl projections, and has Louisville playing Mississippi State in the BBVA Compass Bowl on Jan. 7.

The Sporting News reveals its "official" preseason college basketball rankings and still has Louisville at No. 16, at least five spots lower than any other outlet I've seen since April.

In more Sporting News...news, the publication has named the Bellarmine Knights as their preseason No. 1 in D-II. Senior forward Braydon Hobbs and junior pint guard Jeremy Kendle were named first team All-Americans.

The women's basketball schedule is out.

The Louisville soccer team suffered a tough 2-1 loss at No. 3 North Carolina over the weekend, but returns to action on Friday when they host IUPUI at  5 p.m.

All the Michael Buble controversy has got me thinking: What would the absolute worst song for the Louisville football team to run out to be? Now you can't say like "End of the Road" or "Genie in a Bottle," it has to be something some poor soul might actually think is appropriate.

I've settled on Hinder, "Lips of an Angel." Thinking about it for even less than a second makes me laugh like a little girl.

OK, but if you're reading this sound people, don't play Hinder "Lips of an Angel" when the team runs out Friday night. I'd laugh like a little girl, but a lot of people would not.

Andrea Adelson joins the chorus of those saying Louisville can't afford to look ahead to next Saturday's game against Kentucky.

And finally, the Louisville and Kentucky volleyball teams will meet in Lexington this evening for a 7 p.m. match. The Cards own a record of 5-1 while the Cats are 5-2.