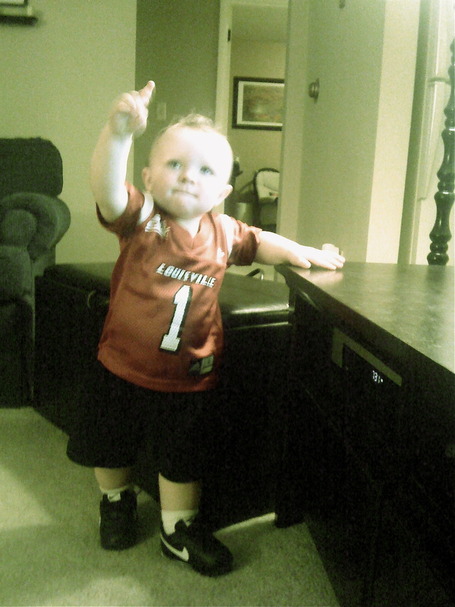 God made Sid beautiful. And when Sid knocks someone out, he's gonna knock 'em out in black nikes. And he's gonna smile while he does it.

For about 80% of Thursday, the big news was that country music artist Trace Adkins would be singing the national anthem before Louisville's home football game against Marshall on Saturday. Seriously, I lost count of the number of Adkins-related messages I received. Trace is a pretty cool name, though. Side note: Does NOT sing "That Ain't My Truck."

Then Rick Pitino hit the keyboard again and Andy Katz released a story which included a tidbit about a "Louisville source" saying U of L was working to help keep the Big East together. The Cardinal Interwebz exploded in a manner I haven't seen since Chicken Knowles committed to Houston.

A quick recap of the madness that ensued:

1) Louisville fans went ape shit. Both here and on ITV.

2) Eric Crawford noticed the explosion and posted this blog piece, which has received a mixed reaction. The main point of contention for detractors, it seems to me, is the following blurb:

I’ve got to say, watching the U of L fan base from an objective distance: It’s amazing that a group that got so angry at any criticism of the league over the past five years now has members who are trashing it worse than any media source ever has. I think what you won’t see from Jurich is any disrespect for the Big East.

As many have already pointed out, I don't think any Louisville fans are taking shots at the conference as it currently stands. Before the Pitt/Syracuse news dropped, the vast majority of Cardinal fans were united in their belief that the Big East was the ideal spot for U of L to be. The concern now is that you have a league where nearly all of the football-playing programs that remain would like to get out, and you have a commissioner whose expansion plans have done virtually nothing to alleviate anyone's fears.

The Big East has been wonderful for Louisville, and I would have been more than content for the Cardinals to play in the nation's best basketball conference until the day I died. Things have changed. If the Big East isn't a sinking ship, it's doing an awful job of giving off the proper public impression.

The Big 12 is long-term stability (or as close to long-term stability as possible given the current climate of major college athletics) with the added bonus of top-notch football and a handful of the best basketball programs in the country. If the two are laid out on a table next to each other, there's an obvious choice. This is why Louisville fans were upset when a report implied that U of L might be "choosing" the Big East over the Big 12. Of course we don't have all the facts yet and thus the over-the-top reaction was probably unnecessary, but this is America, it's what we do.

3) At nearly the same time all this madness was going down, the Dallas Morning News released a story saying the idea of the Big 12 adding TCU, Louisville, West Virginia and Cincinnati was "gaining momentum" (the chronically-ill cousin of "heating up").

4) And then, completely out of left field, comes Dennis Dodd with a story about a source "intimately involved in the conference's TV negotiations" who thinks the Big 12 should stay at nine teams.

I don't understand why Dodd would boast so adamantly about the credentials of a source who is doing nothing more than offering an opinion. This guy isn't saying there's even a remote chance of the Big 12 staying at nine teams, he's just saying he thinks it should, and then giving reasons to support his opinion.

I have zero idea why Dodd thought "breaking" this story was necessary.

5) This morning, OrangeBloods.com - a Texas site that famously out-dueled ESPN during the last conference realignment boom - says that if if Missouri stays in the Big 12, the league will add BYU, TCU, and Louisville. If Missouri leaves, the additions will be those three and then either Cincinnati, West Virginia or Boise State.

If you're a proponent of the Big 12 move and you're looking to celebrate, this is the best reason you've had thus far.

We play Marshall in football tomorrow. It's an actual game. Played on a field. It's a big deal. It's actually why all this conference realignment stuff is significant.

C.L. Brown talks briefly about the emergence of Dominique Brown at running back. You have to love this quote:

"I’m just satisfied with the playing time I’m getting right now," Brown said. "I have two great backs in front of me — Victor Anderson and Jeremy Wright — and they’re great leaders. They’re not worried about who gets the most carries long as we get the victory. They’re very humble no matter how many carries each one of us gets."

Gabe Duverge of LouisvilleKy.com believes Rick Pitino is the biggest reason Louisville will ultimately say no if invited to the Big 12. His column holds a lot more weight now than it did 24 hours ago.

NationofBlue.com visits the Big Blue Madness "Tent City" and gives you plenty of reasons to feel great about who you are and the life you lead.

This is the second straight month where we've set a record for traffic. For September, we actually eclipsed the half-a-million views mark in just 27 days. Many thanks to all of you who have helped make this thing bigger than I could have ever imagined.

With basketball entering the fold in October, I can't wait to see what the next few months have in store.

Louisville has made the final four for both D'Vauntes Smith-Rivera and Andrew White. DSR is down to U of L, Memphis, Georgetown and NC State. White will pick between the Cards, Kansas, Texas and West Virginia.

According to InsideTheHall.com, John Calipari has extended a scholarship offer to former Louisville recruit Gary Harris. Harris' father told Jody Demling recently that Rick Pitino no longer had a scholarship available for his son after the commitment of Cincy guard Terry Rozier.

For anyone who ever wondered what Michael Jordan's college dorm room looked like... 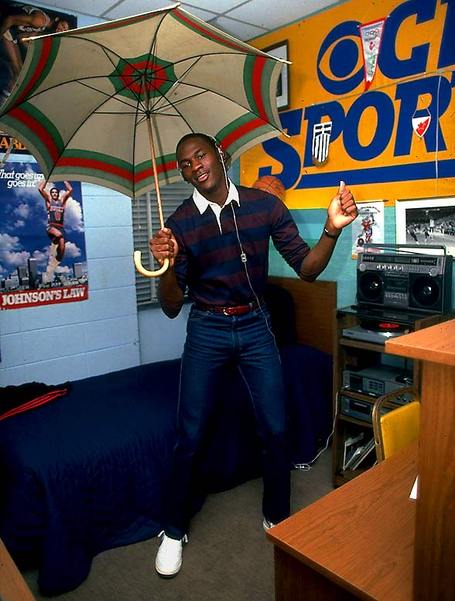 Never would have guessed Jordan was that clean. Or that enamored with Marques Johnson.

Awful news for Michigan State's Delvon Roe, who announced yesterday that he was calling it a career because of chronic knee issues. The good news for Roe is that he has already been cast in a starring role for an upcoming feature film.

Pitt absolutely thumped previously unbeaten South Florida last night, 44-17. I'm choosing to view this as a shot in the arm for our Big East championship outlook.

Let us not forget that Marshall has defeated Louisville three straight times.

A preview of Saturday night's huge soccer match between No. 1 Connecticut and No. 8 Louisville.

Louisville is looking to put on a show at home after a pair of lackluster efforts at PJCS to start the season.