Is it already Teddy time?

Share All sharing options for: Is it already Teddy time?

In my mind, the signature moment of the Charlie Strong era at Louisville thus far is Teddy Bridgewater's commitment to the program last December.

Winning a bowl game in year one and finishing with a record above .500 for the first time since 2006 were obviously tremendous achievements, but landing Bridgewater - the No. 2 quarterback in the country according to Rivals.com - was the ultimate indication that a return to national prominence was not only a possibility, but a probability. It was the biggest recruiting coup in the history of Cardinal football, and involved a kid who plays the sport's most important position.

"Bridgewater" and "future" became synonymous with Louisville football the day he signed. But with an experienced junior quarterback returning to the fold, all signs pointed to the future being put on hold, or at least slow motion, for at least a year.

Then the Kentucky game happened.

An injury forces Bridgewater into action early in the second quarter of a road game against an arch-rival Louisville hasn't beaten in four years. The Cardinals lead 7-3. In my mind, this was the worst case scenario.

Bridgewater's collegiate career had already gotten off to a rough start when he threw an interception on his first attempt in the season-opener against Murray State. Now all of the sudden he has to be the man in an extremely hostile environment with his team holding a small lead in a game he knows everyone around the program wants to win desperately. He had played two series up to this point; the first had ended with an interception, the second was a three-and-out.

Stories of freshman sensations whose careers had been ruined because they were "brought along too quickly" or were traumatized after being "forced into action too early" taunted my mind.

And then, just like that, it was Teddy time.

The freshman played with the poise of a three-year starter, finding open receivers, making checks at the line, never once buckling to the pressure of a consistent pass rush. He finished the evening with two touchdown passes and was perhaps the biggest reason every Cardinal was able to hold the Governor's Cup for the first time. 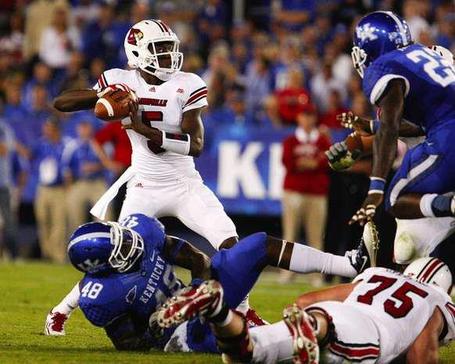 I was shocked. But after hearing Bridgewater's coaches and teammates talk about the freshman, I suppose I shouldn't have been.

"I've had confidence in Teddy since he stepped on campus," said senior defensive end Greg Scruggs. "When he got on campus he didn't look like a regular freshman. He carried himself with a calm demeanor. He actually calmed me down before the Kentucky game."

A freshman calming down a senior captain?

"You daggone right. He could see it in my eyes that I was a little fired up. He just walked around with a smile on his face and said, 'Six, what you worried about. Six, calm down. What you worried about? I need you, six.' He's a quarterback of the team, he's a leader. If he has something to say, best believe I'm going to listen."

How rare is that to see in a player so young? This is a true freshman, and this was the third game of the season.

"To be honest, I haven't seen it since I've been here. It's something new to me and I've gained a whole new respect for him because of that. He carries himself like he's been here four or five years, like he's started every game. It's unbelievable."

Still, the common thought was that Bridgewater's performance against Kentucky was little more than a tease of the future, a trailer for the 2013 or 2014 season. It's a thought that was confirmed when head coach Charlie Strong announced the Monday after Louisville's victory that Will Stein was healthy and would retain his role of starter against Marshall on Oct. 1.

Now comes word that Stein may not be healthy enough to go on Saturday, meaning Bridgewater making his first career start is a very real possibility. If he improves upon his effort against the Wildcats and the offense rolls over the Thundering Herd, taking the reigns away from the freshman will be difficult and perhaps even unpopular.

The question is out there now: Is it already Teddy time?