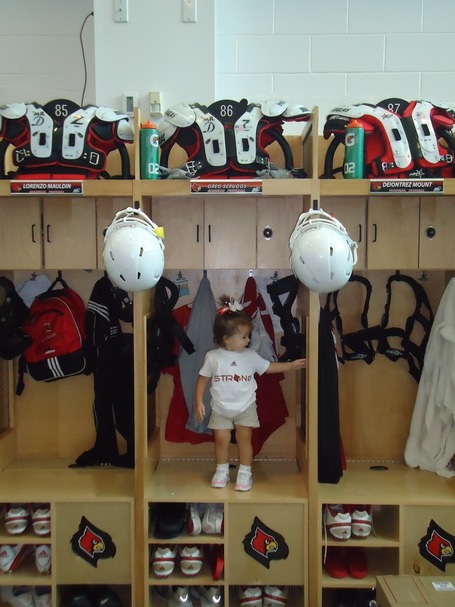 That's Kendall Wallace spending some QT inside a place most female Cardinal fans have only dreamed of: Greg Scruggs' locker.

The beginning is going to be a tad conference realignment heavy.

You know what they say: Always start with the significant but soul-crushingly dense and dull stuff first. It's why Children of Men was such a big hit.

I'll try and keep this as clean and easy as possible.

C.L. Brown spoke directly with Tom Jurich on Wednesday, and the Cardinal AD gave the following answer to a question about potentially making the jump to the Big 12 if the opportunity presented itself:

The Big 12 has a lot to settle amongst itself, but if everything gets worked out smoothly and the league wants to get back to 12 or more teams...

Do we even have a Phillips 66 in Louisville? Is that gonna be an issue?

If it helps, I ate pizza from Casey's at least once a week the summer I lived in Iowa. Yeah, that's right, you like that. I know how the Midwest feels about Casey's.

Eric Crawford has a highly-detailed conference realignment Q&A that is a great read for any Louisville fan who has been following along closely or is simply trying to garner a basic understanding of what the hell is going on.

Q: Is Louisville a candidate to go to the Big 12?
A: Louisville is a name that is being tossed around inside and outside Big 12 circles, but there seems to be no real consensus in the league on which direction to go. Two things on this: First, Oklahoma, reportedly, wants to add BYU, TCU and Air Force, and Oklahoma may be wielding some additional power. Mainly, the Big 12 needs to get its own membership (and leadership) in order before it can go after anyone on the outside. And both of those situations appear to be far from settled. There are some deep rifts, financial and administrative, that still have the landscape of this embattled conference shaking a bit. A lot will certainly ride on who the next commissioner is, if Dan Beebe is indeed out.

But second, and I put some stock in this, if ESPN’s people keep reporting that U of L is on the table, I tend to believe that U of L is on the table. These TV networks, by now, know the value of leagues and know how the value would change with each scenario (see below on how expansion candidates are picked). And while starting next season the Big 12′s main TV deal is with FOX, not ESPN (something for possible candidates to think about), I can’t believe that ESPN wouldn’t have a good handle on who makes sense and who league consultants are saying would work.

U of L President James Ramsey got into the fun(?) on Wednesday, and WDRB snagged realignment comments from him as well as several students.

UofL President, James Ramsey, says athletics is a priority for the campus.

He says it's essential to be in a good conference to spotlight that.

"We're committed to the Big East. It's a great conference. It has great history. We value its diversity," says President Ramsey.

You don't know anything about valuing diversity unless you've spent a weekend in Ames...pounding gas station pizza at 3:30 in the morning.

Multiple outlets are now reporting that conference officials are moving to replace Big 12 commissioner Dan Beebe, who could be fired or announce his resignation on Thursday. The likely interim replacement would be Chuck Neinas, who was the assistant executive director of the NCAA from 1961-1971 and Big Eight commissioner from 1971-1980.

Neinas and Jurich do have a relationship based off of Jurich's days at Colorado State, and my understanding is that it's a cordial one.

In news pertaining to actual sporting contests being played on actual fields, the fifth-ranked Louisville soccer team went on the road and got a late goal from Kenney Walker to knock off Ohio State, 1-0. The win ended the Buckeyes' 12-game home winning streak.

The Cards next travel to Notre Dame for a 7 p.m. Saturday showdown against the No. 12 Fighting Irish. The action can be seen live on the Fox Soccer Channel.

Spencer Hall of EDSBS fame recently tweeted about his dream of the Big East and Sun Belt combining to form the unf--kwithable "Sun Beast." Sohl, in all of his genius, designed this incredible Sun Beast logo. 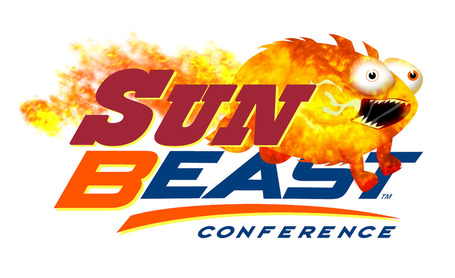 Don't care if it was just us and Arkansas State, I would support a move to the Sun Beast.

Archie Goodwin committed to Kentucky ("I love my state but it's a business decision"), while Perry Ellis made the wiser choice and signed up (figuratively) with Kansas.

According to TheRecruitScoop.com, Louisville has offered a scholarship to class of 2013 small forward Ishmail Wainright. Wainright, the 32nd best player in the class according to Rivals, has offers from a host of schools in the Midwest and on the West Coast. UCLA and Missouri have previously been characterized as his leaders.

The Bring Chicken to the Bucket may have lost A LITTLE steam in the past couple of weeks, but I'm glad Google still knows what's up.

And since I'm already there...

That Saved by the Bell post really left some people concerned.

A Kansas writer says that Bill Self told Terrence Williams he wasn't welcome at KU because of his ego.

A fantastic story from WDRB on a local man with cystic fibrosis who is preparing to compete in a triathlon.

On a related note, the second annual CF Climb For Life will be taking place this Saturday morning at Papa John's Cardinal Stadium. Registration starts at 8 a.m. and the climb begins an hour after that. Charlie Strong is serving as the honorary chair for this year's event, and will be on-hand along with several Cardinal football players.

Senorise Perry got a little swag for his efforts on special teams against Kentucky last Saturday. 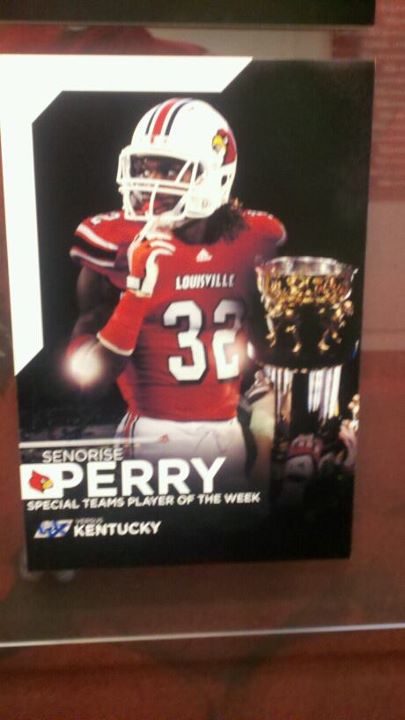 And finally, some hard-hitting, grammatically incorrect reporting/tweeting from our local newspaper of record.

So if you'd been holding back up until now...feel free to let 'em have it. That's what they're for. That's how they're used.

Are the kids today even old enough to remember Chappelle's Show? God that's a depressing thought.