Volleyball Cards ready for first game at the Yum Center

Share All sharing options for: Volleyball Cards ready for first game at the Yum Center

Here's part of the release from U of L:

The Louisville Cardinal volleyball team (8-4) returns home when it opens up BIG EAST play against St. John's (9-8) on Friday, Sept. 23 at 7 p.m. The Cards move into their new home at the KFC Yum! Center, for their first of six matches downtown. The Cardinals remain home at the KFC Yum! Center on Sunday, Sept. 25 when they play host to Connecticut (8-5) at 2 p.m. There will be a free postgame youth clinic following Sunday's match.

Louisville opens up conference play as the favorite. The Cardinals were picked by the league's coaches to capture the regular-season title. Preseason Player of the Year Lola Arslanbekova has been unstoppable as of late. The junior has been named to three straight all-tournament teams, most recently the BIG EAST/Big Ten Challenge. Arslanbekova recorded a career-high 30 kills on Saturday against Illinois en route to her fourth double-double of the season. Louisville is coming off of a heartbreaking 0-2 week where they lost to both #14 Purdue and #3 Illinois in five sets. Fans can watch the action on CardsTV and follow the action through Gametracker on www.UofLSports.com.

And here are a couple of shots of what the court inside The Bucket's going to look like on Friday night: 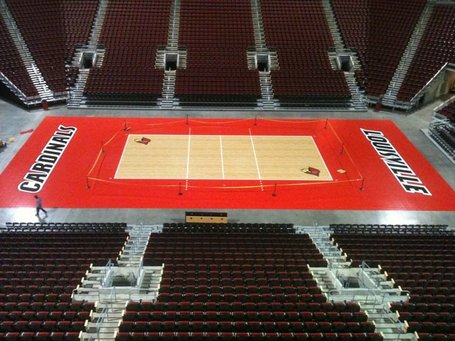 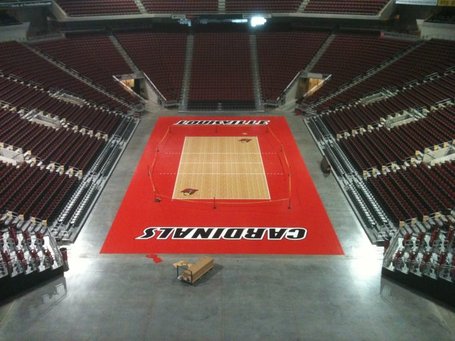