Hurtt: "It's only Kentucky"

Share All sharing options for: Hurtt: "It's only Kentucky"

C.L. Brown is back with some Tuesday tidbits from practice earlier today, and most noteworthy is a quote from defensive line coach Clint Hurtt that is sure to draw a reaction from some folks in Lexington.

"Everybody acts like we won the Super Bowl," Hurtt said. "It’s only Kentucky. You should expect to go win that game and then get ready to prepare for the next one. That has to be your attitude and mentality. That’s what this group needs to understand." 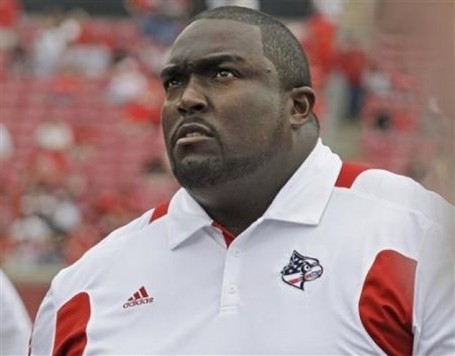 A couple of other noteworthy items:

--Strong said at his weekly press conference on Monday that he thought Will Stein would not be missing any practice time, but Stein did not dress out today and had his arm in a sling.

--Someone who did dress out was center Mario Benavides, who has been out of action since early August with a staph infection in his foot. Definitely a good sign for the final 3/4 of the season.

--And apparently the Cardinals are handling success with all the poise you'd expect from a really, really young team.

***Young teams often have a tough time keeping focused after big wins. Based on how many players had to stay after practice for calisthenics, I’d say the Cards are no exception. About 10 players, mostly freshmen including DeVante Parker, Eli Rogers and B.J. Dubose, had to deal with strength and conditioning coach Pat Moorer and his drill sergeant presence pushing them through more drills.

I just peed a little.