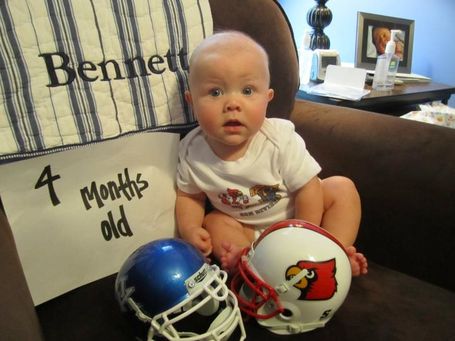 Bennett Danner is fully aware that we're just a little more than 24 hours away from kickoff. He also made me promise I'd let the people know not to get things twisted because of the picture; he'll be cheering for the Cards tomorrow.

The spread for tomorrow's game has dropped to as low as 4.5 on some online sportsbooks, but currently sits at UK-5.5 at most Las Vegas locales.

Art Carmody is on a writing tear. First, he talks about what life as a Louisville football player is like on gameday, and then he discusses the recent comments made by Charlie Strong. Both are great reads.

I check Pat Doney out all the time, too. Sometimes on TV, sometimes on the computer, sometimes when he's taking his afternoon jog.

Bloggin' Rick is back just in time for the weekend and this week he's talking about U of L's schedule. After briefly mentioning how "disgusted" he is with the imbalanced Big East schedule, BR takes a quick look at each of Louisville's non-conference opponents as well as Seton Hall and Rutgers.

Then he talks a little football.

Everyone thinks this football game, Louisville vs. Kentucky, will be two teams that will struggle to score.  Look for a high scoring game and the Cardinals to bring home a victory.  Our small QB has a big heart.  Yes, he does get some balls batted down, but he is accurate rolling out.  They are young and will improve.  It should be much more exciting than the pundits think.  At least I hope so!

I love our small QB.

It's been known for a while now that Louisville's home football game against Marshall on Oct. 1 would kick off at 3:30, but yesterday it was announced that those hoping to watch on television will be relegated to ESPN3.com.

John Clay says it looks like this might be the first time ever that the Louisville/Kentucky game has drawn less than 70,000 people to Commonwealth Stadium.

A total of five former walk-ons from Trinity High School will play prominent roles in tomorrow's U of L/UK game. That's pretty unreal.

Speaking of Trinity, the Shamrocks travel to the Queen City tonight for a showdown with Cincinnati St. X. Many polls have both squads ranked in the top ten nationally, and one has this as a matchup of the country's No. 2 and No. 3 high school teams. You can catch the action - which will feature several Louisville recruits - live by following this link.

Francisco Garcia is suing the manufacturers of an exercise ball. So there's that.

A fake story on Big east expansion which I might actually believe if it weren't for the headline.

The State Journal in Frankfort says the ground game will determine tomorrow's winner. Although this has been said about every college football game ever played, I don't necessarily agree in this instance.

Three St. John's freshmen basketball players have been ruled ineligible by the NCAA. In response, Steve Lavin issued a statement saying, "Look at your wife. Now look at my wife. Deuces, bitch."

New Courier-Journal UK beat writer Kyle Tucker has an extensive look at everything you need to know heading into tomorrow's game from a Kentucky standpoint.

And finally, ESPN's Andrea Adelson says tomorrow's game is a "critical" one for Louisville.