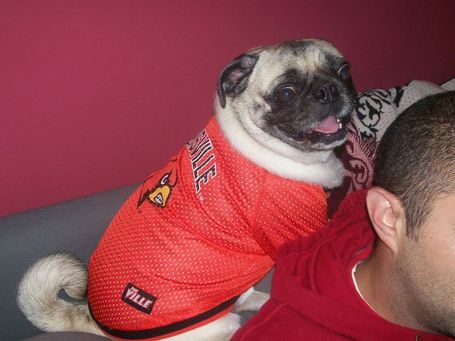 Not sure Peter Dartmouth McNatt could be more focused or excited about the task at hand.

ESPN's Andrea Adelson is taking Louisville over Kentucky in her upset pick of the week.

Louisville (1-1) at Kentucky (2-0), 7 p.m., Saturday, ESPNU. The Cardinals have not done much in two games to inspire a lot of confidence going into this contest. But then again, Kentucky hasn't either. Let's be honest -- both teams have played poorly in their first two games. And the last two times this game has been played in Lexington, the games have been decided by a total of 10 points. Coach Charlie Strong has gone the motivational speaker route, telling everyone who would listen that his team isn't good enough to beat Kentucky this year. Maybe. Maybe not. Rivalry games are a different animal. Kentucky does not have T.Y. Hilton, the biggest reason Louisville lost last week. Take away his 201 yards and FIU had 92 yards of total offense. In fact, Kentucky has not shown much of anything on offense, ranking No. 110 in the nation. I think the Cardinals will play better on the offensive line and finally have a solid performance up front on defense. They will limit the turnovers in critical situations, and they will beat Kentucky for the first time in five games in my UPSET PICK OF THE WEEK. Louisville 24, Kentucky 23.

ESPN's SEC bloggers are split on their Saturday prediction.

Chris Low: The first team to 20 points wins. Maybe the first team to two touchdowns wins. It hasn’t been pretty for the Wildcats on offense, but they’re winning with defense, which will be enough for them to extend their winning streak in the Governor’s Cup to five straight games. … Kentucky 16, Louisville 10.

Edward Aschoff: The Wildcats' offense has been hard to watch at times, while Louisville is coming off a tough loss to Florida International. But this is a rivalry game, which means both teams will be pulling out new treats and wrinkles. Louisville coach Charlie Strong will be looking for revenge after dropping his first game in the rivalry last year. What better place to do it than Lexington? ... Louisville 28, Kentucky 17

Just a reminder that if you're an out-of-towner who wants to let fellow area Card fans know where they can feel at home during Saturday's game, let me know where you're going to be viewing (MikeRuth5@aol.com) and I'll throw it on the "Where We're Watching" list for tomorrow.

On a related note, if anyone's going to be watching the game in the Fort Wayne area, reader Drew Ladig would like to know. You can email him at drew.ladig@gmail.com.

With Billy Joe Murphy still sitting out of practice because of a strained MCL, it's likely that Kentucky will be starting true freshman Darrian Miller at right tackle against U of L. Only five true freshman in the country have started a game on the offensive line this season, and one of them is Louisville's John Miller, who should make his third straight start at left guard on Saturday.

UL/UK predictions and projections from AccuScore:

The fallout from GCA's Burn Book has already begun.

I know you love Gorgui like everybody and thought you would enjoy this short story. I saw Gorgui and some of the other basketball players hanging around Community Park during the fraternity rush festivities. Two girls handed their purses to Gorgui and then they disappeared. Gorgui just stood alone away from the masses of people and held the purses. 15 minutes later he was still standing there by himself and then safely returned the purses to the girls. He was solely focused on the task of safeguarding the purses and patiently waited for them to return. How could anybody ever not trust Gorgui?

Only way it could be better is if it happened on a beach.

The powers that be at Miami are now making a play to try and get the NCAA to punish the former UM assistants (including Clint Hurtt) named in the Yahoo! report more than UM itself. Given the details of that report, it seems like a desperate attempt from a program with no other options.

I'm not saying that Hurtt won't be punished (he will), but Miami trying to shift the majority of blame for all of the wrong-doings laid out in the Yahoo! report on guys who aren't with the program anymore is going to be, to put it mildly, a tough sell.

Kentucky center Matt Smith practiced yesterday after sitting out on Monday and Tuesday because of injury. Joker Phillips told Jerry Tipton that he expects Smith to play on Saturday.

"He looked pretty good," Phillips said of Smith's participation in practice. "I was expecting him to look like a freshman. But he didn't."

I can't stop laughing at this photoshopped picture of B.J. Butler - who Vance Bedford hopes will play 10-12 snaps on Saturday - "having his portrait" done. 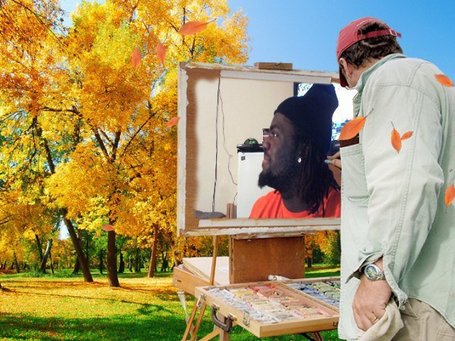 You too, Central Florida.

Trinity's James Quick and Jason Hatcher have both made the cut for Scout.com's new Top 100 for the class of 2013. The pair, along with a group of other elite local talent, will be in Lexington on Saturday for the Battle for the Governor's Cup.

A video on the commitments of Chicken Knowles and Danuel House to Houston. Don't watch if you're already in a sad mood.

Raymond Sanders' father talks about his son's knee injury. It's a fierce rivalry, but you never want to see anyone get hurt, especially when it results in a guy missing a game that means so much to both sides.
Sanders is out 2-3 weeks after undergoing surgery this morning.

And finally, John Clay has the year-by-year results and total yardage from each UL/UK game since the series renewed in 1994.