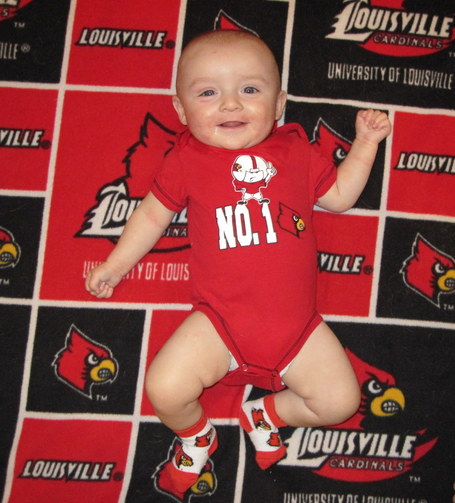 AJ Staab could not be more focused on taking back the state.

C.L. Brown says you can't expect to see much of defensive end B.J. Butler against Kentucky on Saturday.

"He’ll be limited, he’s not in football shape," U of L defensive coordinator Vance Bedford said. "If he does get out there he’ll be like (Greg) Scruggs against Murray State — 10-12 plays  if we’re lucky."

Butler missed the first two games with a knee injury. The 6-foot-2, 275-pounder was likely going to be a starter before getting hurt.

"He’s moving around a little bit he’s still not where he needs to be," Bedford said. "He’s definitely out of shape right now. We’ll see how he feels tomorrow if he practices or not."

But you can expect to see more of fullback Nick Heuser.

In a sort of under-the-radar move, it was announced earlier this week that Friends of Coal-Kentucky would be the "signature sponsor" of this year's UL/UK game.

As part of its ongoing effort to grow support for Kentucky’s coal miners, the Kentucky Coal Association (KCA) announced today that this year’s football game between the University of Kentucky (UK) and the University of Louisville (U of L) will be sponsored by the Friends of Coal–Kentucky.

"This rivalry game is watched closely by Kentuckians whether they wear blue or red," said Bill Bissett, President of the KCA. "As the proud representatives of Kentucky’s 18,000 coal miners, it gives us a great opportunity to not only communicate with thousands of Kentuckians on how coal provides affordable electricity throughout the state and nation, but also this sponsorship is helping pay tribute to their continued dedication and hard work in supporting the Commonwealth."

To honor Twitter, SI's Andy Glockner sums up the college basketball offseason with a series of 140 characters or less blurbs. Here's his "tweet" about Louisville:

Not as confident as others that Kuric, Siva, nice parts/frosh = preseason hype. One road game (at Butler) b/f 12/31 at Rupp? Happy New Year!

One employee at this Louisville Kroger is into the spirit of the week. 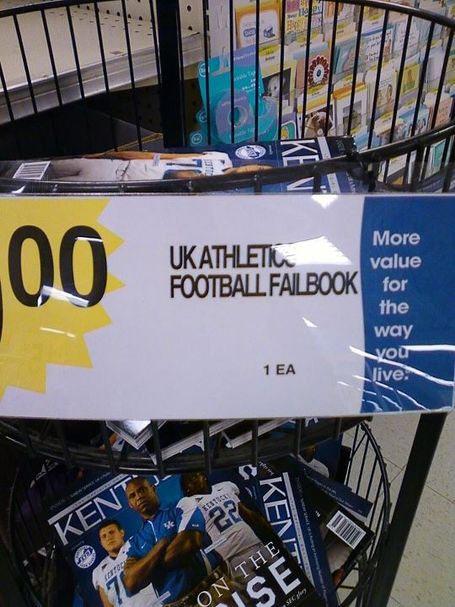 Eric Crawford says that Charlie Strong's comments about not knowing whether or not his team can beat Kentucky may have been honest words and not just an attempt to motivate.

A Sea of Blue takes a look at the key stats heading into this year's Battle for the Governor's Cup.

A few people have asked whether or not I'm going to the game on Saturday, and the answer is no. I attended the 2005 game at Commonwealth, and that experience was enough to make me swear I'd never go back. It's not like I didn't expect it, and I'm sure Kentucky fans have had similar experiences at Louisville games, but for me, putting up with or trying to ignore insults for the better part of four quarters just made the whole thing...not fun. And this was when we were ranked in the top 15 and they were awful.

I can't imagine being there for a night game when people have been drinking all day.

Morgan Newton on Saturday's game: "If we play our best ball, things should take care of themselves."

A few other notes from today's UK practice, courtesy of KSR.

-Center Matt Smith (ankle) practiced with the second offense today. Coach Phillips said he looked good but still expects Jake Lakefski to get the start in the middle against Louisville.

-Wide Receiver Brian Adams (ankle) also practiced today. He came up a little gimpy on one play, Phillips said, but remained in practice and will play on Saturday.

-When asked about the nose tackle position Minter said that Cobble had been battling injuries but is getting where he needs to be. He boasted that Cobble is 320, which is one of the reasons he will get more playing time, and that he uses his hands extremely well. He called Cobble getting more snaps than McDermott not more of a demotion of McDermott but more of a promotion for Cobble. Look for Cobble to be more of a staple at the nose tackle position heading into SEC play.

Louisville's Dec. 20 (Tuesday) home basketball game against College of Charleston will tip-off at 9 p.m. Love when Bobby Cremins is in town.

Our best wishes to Cardinal quarterback commit Will Gardner, who underwent knee surgery this morning to repair his torn ACL.

The Louisville baseball team will be taking part in a pair of open scrimmages this weekend. The Cardinals will open the weekend scrimmage schedule on Friday at 3 p.m., with a second scrimmage taking place Sunday at 4 p.m. Both scrimmages are open to the public and batting practice will begin approximately one hour prior to first pitch.

And finally, for those who like to argue that the Louisville/Kentucky game is little more than a chance for one fan base to beat its collective chest, Ridge Wilson talks about how UK's 2008 victory over U of L is the reason he's a Wildcat and not a Cardinal.