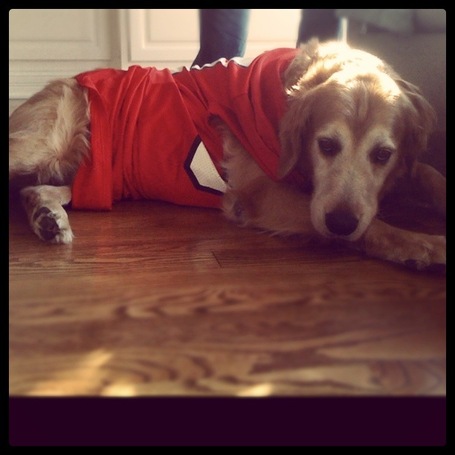 It's Kentucky week and Starbucc - the son of our very own GoCardsAttitude - is showing pride by repping his Dexter Heyman jersey...hard. It's the only way he knows how.

It wasn't surprising to hear Charlie Strong announce at yesterday's press conference that junior center Mario Benavides would not play against Kentucky. What was surprising was Strong's statement that Benavides was "close to being back." Everything I'd heard in the last several weeks seemed to indicate that we'd be lucky to have him back in the lineup by mid-to-late October, but having Benavides for 3/4 of a season as opposed to half a season could easily be the difference between going bowling and staying home for the holidays.

If Mario's healthy enough to go against Marshall on Oct. 1, it will be huge for this team.

Charlie Strong's comments garnered more attention than anyone else's on media Monday, and rightfully so. But the attention paid to Strong's "I don't know if we can beat Kentucky right now" stance took attention away from UK linebacker Ronnie Sneed, who made the following proclamation:

"We don’t want to be that team that lost to Louisville, and we’re not going to let it happen."

Sneed becomes the second Wildcat to guarantee victory over Louisville. Granted he wasn't quite as brash as defensive lineman Collins Uku, who actually used the word "guarantee" during UK's media day when boasting that the Cats would beat both the Cards and Tennessee.

As for Strong's comments, he had just gotten off the Big East coaches conference call, and you could sort of tell that he was pissed off after already having to talk about the Florida International loss a little bit. That led into this...

The Cafe Press at the St. Matthew's Mall is having a UL/UK t-shirt contest to see which sides will buy more of their team's game-themed t-shirt.

Here's what they have for Louisville: 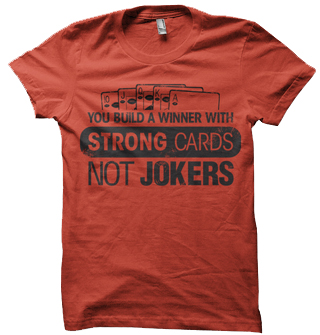 The shirt currently has a large lead over its UK counterpart.

Joker Phillips announced at his press conference that offensive linemen Billy Joe Murphy (right tackle) and Matt Smith (center), as well as safetyTaiedo Smith would not be practicing on Tuesday because of injury. They also sat out Monday's practice. My guess is that all three will suit up on Saturday.

A Sea of Blue asks which team needs a win on Saturday more.

On the other side of the country, last Friday Wyking Jones was paying an in-house visit to Robert Upshaw, the four-star center from Fresno, Cal. Upshaw, a member of the class of 2012, is deciding between U of L, Arizona, USC, Georgetown, Fresno State, Kansas State, Maryland, UNLV and Oklahoma State.

Not everyone is comfortable speaking their mind, but sometimes it pays to say what you mean and mean what you say, even if it becomes message board fodder. Here's what I mean. In July, Terry Rozier (Shaker Heights, Ohio/Shaker Heights) was asked to name his dream school. Instead of being coy, Rozier was honest. He blurted out "Louisville." At this point, Rozier was at the LeBron James Skills Academy, an event that turned out to be his coming out party. Cleveland State was his leader at the time. Louisville had no idea that the kid was a Cardinals fan and wanted to be a part of their program. So what do the Louisville coaches do? They read the quote and begin watching Rozier.

The Big East Coast Bias says that the Big 12 is done after Texas A&M's move to the SEC, and looks at what all this might mean for the Big East.

The second-ranked men's soccer team had an exciting 3-2 come-from-behind win over Central Arkansas on Sunday. They return to the pitch on Saturday when they host Butler at 7 p.m. Timing could be better.

The women's soccer team was less successful, falling to Kentucky 2-0 on Friday. Coupled with last week's loss in volleyball, the Cards are now 0-2 against the Cats during rivalry month.

Quick reminder that #BringChickenToTheBucket shirts are on sale for just $10 until tomorrow night at 6 p.m. At that time, the price will jump to $20.

And finally, Saturday's game might be one of the lowest-profile meetings between Louisville and Kentucky since the football series renewed in 1994, but even with that being the case it's pretty amazing how much attention the matchup warrants in these parts. UK plays in the SEC, and Joker Phillips still made the comment that "it must be Louisville week" when he noticed the number of media members on hand for his team's Tuesday practice. If you do a quick Twitter search for "Louisville" or "Kentucky," about 75% of the tweets are about the game.

It's always a big deal.