Share All sharing options for: Chicken Knowles commits to...I can't do it

If you're reading this, you already know. The Chicken Movement has been boarded up. The hashtags. The re-tweets. Everything. We're at the Comfort Inn. Room 112.

I love you. Mike.

OK, no more movie/music references. Anyways, if you hadn't heard yet, I'm about to steal your innocence. Chicken Knowles, and AAU teammate Danuel House, have committed to play basketball at Houston.

Obviously, I've had a hard time coping with the news. There was an incident last night at the KFC/Taco Bell on Brownsboro. I'd rather not talk about it.

But drastic times call for drastic measures. The kid still can't sign anything yet, and in the immortal words of Michael Scott, "BFD, she doesn't have a ring on her finger."

So with this hit to the movement and Kentucky week all collapsing on top of us at once, here's what I've convinced the Carmody's Cafe brass to do. From now until Wednesday night at 6 p.m., you will be able to purchase the following shirt: 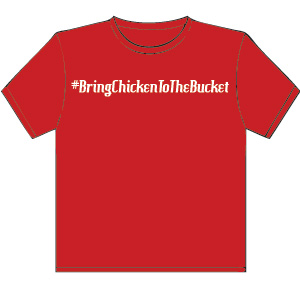 For just $10. The shirt will still be available for purchase after Wednesday, but the price will jump to $20.

So whether you're still a staunch member of the movement, or simply hoping to memorialize that Card Chronicle 2011 summer that was, here's your chance to make a statement.

In all seriousness, congratulations to Chicken on his commitment, and also kudos to the many Cardinal fans who showed him love on Twitter. It looked like he had about five times as many well-wishes from U of L folks as he did actual Houston Cougar fans. Well played, 'Cloids.