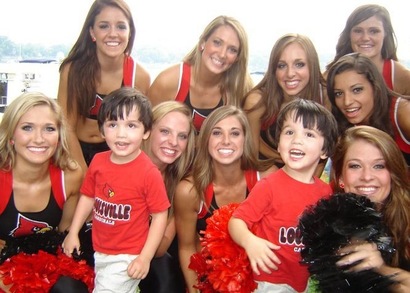 Where out-of-town folks are watching the game tonight:

According to Jody Demling, Trinity star James Quick will be attending tonight's game against Murray State as a Louisville visitor.

Scout.com reports that Rick Pitino will be making an in-house visit with class of 2012 star Gary Harris on Sept. 10.

"Louisville's situation has been a little different," said Harris. "Tim Fuller was recruiting me, but then he left and they got a whole new staff. It was just kind of different because I didn't have the relationship with that staff that I had with the other staffs. Now I am developing a good relationship with Wyking Jones. They have been calling me a lot lately, and Coach Pitino is just going to come in and tell me where I fit in their program and how he plans on using me. Assuming he meeting goes well I plan to make an official visit down there after that."

TheCardinalConnect.com reports that George Goode will playing his final season of collegiate basketball at Fairleigh Dickinson, and not Missouri. This would mean a homecoming for George when the Knights visit the Yum Center on Dec. 10. Former Cardinal Chris Brickley recently accepted a position as an assistant at FDU.

Sir Arthur Carmody gives his take on the opening of the 2011 college football season over at Carmody's Cafe.

The parent of a Miami player is leveling an allegation against Clint Hurtt that's not detailed in the Yahoo report.

ESPN's Andrea Adelson is calling it for Louisville, 38-17.

Murray State at Louisville, Thursday, 6 p.m. ESPNU. We get our first glimpse at the baby Cardinals, who have 21 true or redshirt freshmen on their two-deep headed into this game, and are going to be without two big contributors in center Mario Benavides and defensive end B.J. Butler. This is going to be a test for the Cardinals and their green secondary because Murray State likes to throw. Pat Forde called an upset, but I am going with the Cardinals. Louisville 38, Murray State 17.

Bruce Feldman has left ESPN and joined the growing army at CBS. Cheers to him.

Plenty of tickets are still available for tonight's WKU/UK game. In fact, they're giving them away for free.

And finally, SB Nation notes that U of L will be kicking off the entire season. It's a large load to bear, but I'm quite sure Titus Teague's shoulders are up to the task.