The Road to the Final Four Begins in Nassau

Share All sharing options for: The Road to the Final Four Begins in Nassau 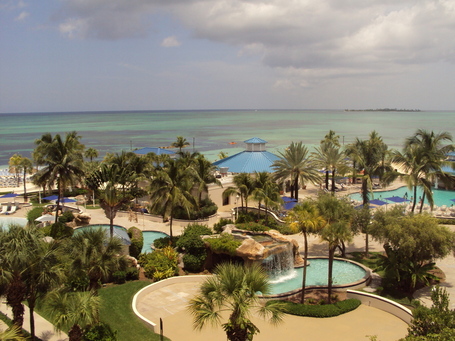 When my parents told me that they would take me on a trip after I completed the bar exam, there really was only one place I wanted to go. Today, we landed in the Bahamas, and while the place is unbelievable, the truth of the matter is that I'm not really concerned with any of it. Tomorrow, basketball season begins and the City's Team will begin its march to the Final Four. Here are the top five things on my mind as we begin a new year of Cardinal Basketball.

Bottom Line: the guy fascinates me. I can't wait to be in an intimate setting, listening to the man scream out plays, rip into his players, and maybe even offer some encouragement. All seasons in Louisville are big, but this one seems to be especially important. The only coach to take three different teams to the Final Four is coming off two first round exits and well . . . . you know. Pitino desperately needs a deep run into the post season this year in order to quiet his critics. Tomorrow, it all begins.

When Gorgui Dieng committed to the Cardinal Program, a valued member of that great fan base in Lexington informed me that Gorgui would be no better than Kentucky Superstar Shagari Alleyne. However, Gorgui quickly made me look good by scoring a basket and grabbing a rebound in an actual game. Pitino has continuously eluded to the fact that Gorgui may be the most vital piece to Louisville's Final Four puzzle. We have heard about the weight he has put on, his continued improvement, and his unlimited potential. I can't wait to see what Gorgui does tomorrow and in the future.

Frankly, I am sick of hearing about the size of Chane's thighs and I just want to see him play basketball. I don't think I have ever heard Pitino speak so glowingly about a freshman. Chane seems to be the missing piece of a team that was in dire need of a junkyard dog that relentlessly crashes the boards. I'll be taking note of every rebound Chane comes up with.

Mike Marra has never been popular with the Louisville faithful, but I don't care. Mike is my guy and is so because there is absolutely nothing I love more than watching Big Mike go on a winning streak from the three-point line. It is equally as fun to trash everyone who doubts him. However, I will admit that I don't get to indulge in this guilty pleasure that often. It will be interesting to see what role Marra has on this team given the depth at his position.I have only two pieces of advice for Marra: keep getting tattoos and keep shooting.

All great things in life are likely to come with some disappointments and the great disappointment of this trip is that I will have to wait a few more months to see Wayne Blackshear in a Louisville uniform. The day Blackshear signed his letter of intent to play for Pitino was the culmination of a month-long saga in which many said Wayne would never play for Louisville. Despite all the talk, and the likely influences that were attempting to change Blackshear's mind, he stayed committed, and although many don't see it just yet, it may have been the single event that kept the program from spiraling into mediocrity. Blackshear will be an amazing talent, but his loyalty to the program through thick and thin will not be forgotten.

Bonus: A Word on Peyton Siva.

It took me all of a few games during Peyton Siva's freshman campaign to understand how special the kid really is. I looked at my brother and informed him of my belief that Siva would be the most beloved Louisville player since Dejaun Wheat. On the eve of Siva's Junior season, I stand by my prediction. Simply put, Siva is humble, an impeccable leader, and embodies the "Louisville First" brand of the program more than any other. I only hope his success personally is as big as the heart within him that undoubtedly beats for Louisville. Go get um big guy.

I'll be posting tomorrow with updates on the games and pictures. Everyone enjoy basketball in August.