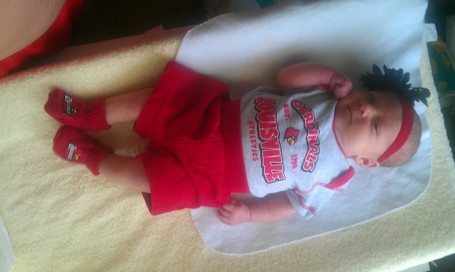 A firm tip of the cap to Brad Ellis on this Tuesday morning. Not only is he exploiting his daughter for surefire fame and glory, but he's also more than willing to admit that "after seeing all the other kids on Card Chronicle dressed up, the only thing I have wanted is for my little girl to be on there."

U of L gives a brief report on Monday afternoon's practice.

- In the team's 7-on-7 drills, the offense worked very quickly during Monday's practice.

- A number of freshmen continue to work at wide receiver for the Cardinals, including DeVante Parker and Eli Rogers.

The Cards worked out/are working out in full pads for the first time this morning.

An interesting theory that I've heard mentioned multiple times over the past 24 hours: Did DaMarcus Smith expose a loophole in his commitment to Central Florida by intentionally failing to qualify? If he did, it's brilliant. If he didn't, he should probably tell people he did.

Luke Winn, who is probably the best in the business right now, has to put together this comprehensive look at the rising number of college basketball recruits decommitting. The piece itself is a...commitment (sorry), but it's worth your time. Here are some of the main points:

• The multiple-high school trend rose to 47 percent in the Class of 2011, suggesting it could break 50 percent later this decade

• 37.4 percent of decommitments can be attributed to school factors, such as coaching changes or NCAA penalties

Speaking of decommitting, that's exactly what former Louisville target Torian Graham has done. The 2012 shooting guard called it quits with North Carolina State on Monday, saying he felt like he "made a decision too fast." Really, it's because Gottfried got fat. Men don't it like when you get fat. God, society's depressing.

I caught the WHAS promo for the first Bahamas game this morning. It features the same highlights of Jerry Smith and Samardo Samuels dunking, but they did manage to find the logo for the Commonwealth Giants, which is impressive.

Speaking of the games in the Bahamas, guess who will be among those in attendance?

John Clay takes a look at  the Cincinnati Bengals' Jay Gruden and his connection to Louisville.

Rivals.com has Trinity as the 9th best high school football team in the country to start the season. Doss is No. 23. Doss isn't No. 23.

Andrea Adelson has been counting down her list of the 25 best players in the Big East, and Victor Anderson is the only Cardinal to make the cut thus far, checking in at No. 22.

Ever wonder what it would be like to get a written scholarship offer from Charlie Strong? Recent commit DeAndre Herron gives you a small taste. 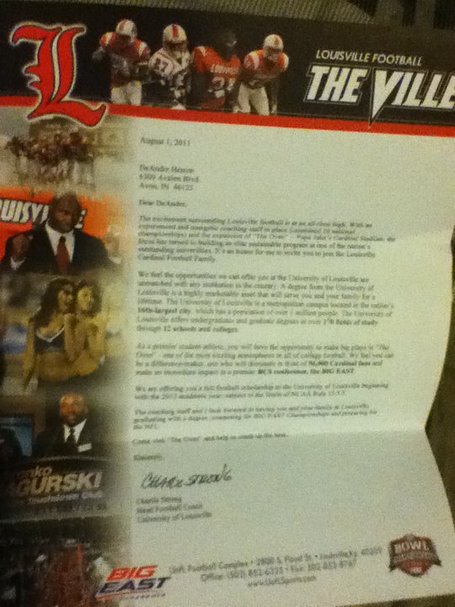 The Herald-Leader takes a look at how Louisville will look to replace Bilal Powell with the two-headed monster of Vic Anderson and Jeremy Wright.

"I just wanted to be out there with the guys while I was hurt but I knew that I really wasn't physically able to be out there," Anderson said. So I just had to take the road that was given to me and coach up the younger guys."

"His maturation process was expedited because of the success that Bilal had," Carter said. "It took pressure off him."

Carter said he's not worried about a featured back surfacing as Powell did in 2010. "Right now, the best depth you can have for your team is competition," he said.

Kudos to them for steering clear of the "Can Anderson Regain Freshman Form?" story that has been written 45 times now.

The women's soccer team will be playing an exhibition game (match?) against St. Louis today at 4 p.m. at Cardinal Park.

Despite suffering a wrist injury, Johnny Patrick is off to a solid start in New Orleans.

That competition took another twist late in Sunday's practice when Patrick jammed his right wrist while trying to down a punt during a drill. He didn't return to the field and the status of his injury wasn't clear. The third-round draft pick from Louisville has made some interceptions and has shown great hands in other situations: more than once, standing on the sideline, he has flashed up his hands and caught badly overthrown balls.

When Patrick left Sunday, his spot was taken by seven-year veteran Leigh Torrence.

"We've got some guys who have played and really we're trying to bring along the young guy, Johnny Patrick," Torrence said. "He's shown some real flashes early on, but our secondary has always been a real close, cohesive unit and we've got a lot of guys who can fill in at a lot of positions."

And finally, former Covington Holy Cross quarterback Jerry Arlinghaus has joined the Louisville football team as a preferred walk-on. The 6-4 QB for threw for 2,807 yards and 27 touchdowns last season. He becomes the fifth quarterback on the Cardinal roster.