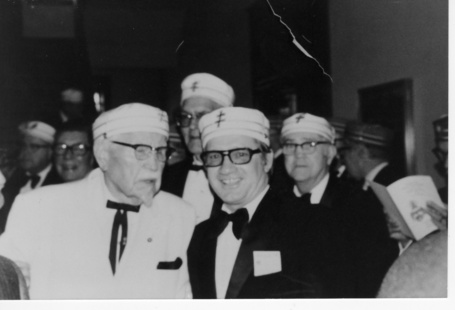 Very cool picture of the actual Colonel Sanders sent in by reader George Heinz. I'll let him tell the story...

This picture is of my father, Bob Heinz and Colonel Sanders; they were both 33rd degree Masons. My father passed away this summer at the Masonic Home in Louisville. Bob went to UL in the forties and we were huge Cardinal fans together. He owned a Sinclair station at Bardstown Rd and Goldsmith lane and when I was a kid he took me to all of the UL football and Basketball games. He and my mom had season tickets to basketball my whole life. Anyway, the picture was taken by my mom and when she said, "say cheese," the colonal leaned to my father and said the word's "chicken." Now, if that was today, he would have said, "we need more chicken in the bucket."

You get to watch Louisville basketball this week. That should make your Monday morning a bit more tolerable. In fact, do a little dance. Right now.

Oh my God, I can't believe you actually did it. Nice moves, Elaine.

U of L fans got their first and last preseason look at the 2011 Cardinal football team over the weekend, a nice little football appetizer which will have to suffice until Sept. 1.

The big "story" from Saturday's practice was that Teddy Bridgewater missed about 3/4 of it because of a sore shoulder. It's not a big deal, especially this early in camp, but it happened and people saw it so it's being talked about. Also, Michaelee Harris had a cast on his injured thumb. That might be more cause for concern. Or not. I don't know.

I'm told that there actually may have been more people at practice on Saturday than there were on Friday, which is decently remarkable. I really thought the turnout for the practices would be fairly pedestrian, but the fact that the totals on both days appeared to be in the four-figure area is a true testament to Charlie Strong and the energy he's brought back to the program.

As of this weekend, Chris Smith is in a walking boot. Not sure if it's just a precautionary deal, but yeah, I'm pretty sure it's not a style thing. You would think if he wasn't going to play in the exhibitions this week that we would have already heard something, but you'd also think Primary Colors would be viewed in a more positive light by the masses.

Bullitt East star Derek Willis (2013) backed off his commitment to Purdue over the weekend, sparking what will almost certainly be a heated local battle for the 6-9 forward. Despite his father saying that he couldn't trust Rick Pitino or John Calipari, Louisville, Kentucky and Indiana likely all have a shot at landing the rising junior.

J-Mychal Reese, one of the 2012 point guards who had been targeted by Rick Pitino, has committed to Texas A&M. His father, who is also his high school coach, has accepted a position on the Aggie staff, but won't join until his son's freshman season. The two pieces of news are not believed to be related.

THE SIGNS SIMPLY DO NOT END.

I was on The Early Birds show this morning and let Drew Deener know that he needs to drop the "hottest male athlete in the world" tidbit when Elisha Justice checks into games this year. If he doesn't do it he joins Demling on the shunned list.

You don't want to be on that list. Look at Jody right now. Career's done, son.

If you're following Preston Knowles on Twitter (@DatDukePK), that account is fake. I'm actually pretty sure it's the same pathetic loser who was behind some of the other fake U of L accounts.

So apparently "coning" (the act of buying a ice cream cone through a drive-through and grabbing it by the ice cream itself not the cone) is the new "planking." If you want to see Will Stein coning (who doesn't?), Chris Philpott has made that dream a reality.

Brannen Greene talks a little bit about his recent visit to U of L.

Louisville was a blast. I enjoyed watching practice and also spending so much time with [head] coach [Rick] Pitino. The coaches are all full of energy and very fun to be around. I got a tour of the KFC Yum! Center from Coach Pitino and we also went on the cat walk. That was the coolest and scariest moment of my life. I was so high in the air. Good thing I had my Dad with me or else I would’ve freaked out. I like the fact that the campus isn’t huge and the gym is so close to everything. I got a chance to hang out with the players and play video games and just chat about Louisville. [Junior guard] Peyton Siva is a pretty cool dude, I must admit. Everyone was pretty cool, though. I really thought the freshman, [class of 2011 small forward] Angel Nunez, was funny. The nicest player there was [sophomore] Gorgui [Deng]. He’s a big 7’0" giant from Senegal. He’s the biggest teddy bear in the world.

The worst part about hanging with the players was that I got beat in NBA 2K11 by 30. [Sophomore guard] Mark Jackson, Jr. was responsible for that. I had the Atlanta Hawks and he had the Dallas Mavericks. He couldn’t miss from the perimeter. It was actually a very funny thing. Overall, I loved the Louisville visit.

"We're going to have some explosiveness out of McKnight and we'll see about this Powell. You know me, I love to fire a fresh (running back) at you."