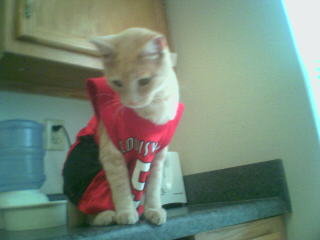 This is "Taquan Dean The Cat" (full name) sporting his standard #5 jersey from the '05-'06 season. Reader Emily Caragianis - who maintains that pet Chronicloid pictures are superior to baby Chronicloid pictures - notes that when a friend informed Taquan that someone had named her cat after him, the Cardinal sharp-shooter's response was a brief laugh, followed by "that's weird."

You're not weird, you're an innovator.

Louisville Cardinal football in one day.

Louisville will not hesitate to use its best players on special teams this season. Accordingly, Josh Bellamy will be returning punts and Vic Anderson and Jeremy Wright are your deep men on kick returners.

Three of the Miami players most significantly punished by the NCAA yesterday were recruited by U of L defensive line coach Clint Hurtt. If it wasn't before, it's now impossible to deny that this scandal is going to touch the Cardinal football program.

My parents rolled up to Fan Outfitters on Saturday to spend some QT with Preston!, and here's their report:

1) Preston has signed with a professional team in Greece. He was originally supposed to report last Friday, but his rehabilitation has not gone as quickly as he was hoping.

2) Is "definitely a fan" of Card Chronicle.

3) Had several people talk to him about the Preston Dance during last season.

6) Someone told him that I lived in Lexington.

7) Said person will be identified and fork-stabbed before Halloween.

There's a bit of a kerfuffle (offseason's over, big guns are coming out) going on in Lexington over UK banning a student reporter from attending a media event after said reporter broke an "unwritten policy" barring reporters from interviewing student-athletes without first going through media relations.

DeWayne Peevey, the director of media relations for the men's basketball team who reportedly made the call, also made headlines earlier in the year when he claimed on twitter that he was revoking the credentials of CBS' Garry Parrish after Parrish had written a column about the recruitment of Anthony Davis that Peevey didn't like.

If you don't have anything extremely, extremely nice to say...stay the f--k out of Lexington so we can harass you relentlessly on the Internet. It's become a completely different world.

Murray State fans talk about Thursday's game and discuss, among other things, the potential for the Racers to have a "home field advantage" advantage at Papa John's Cardinal Stadium (because of the large MSU alumni base in Louisville) and why no one on "the Rutherford site" is mentioning U of L's 1932 and 1933 losses to Murray.

One day until Louisville Cardinal football.

The preseason BlogPoll is out, and unlike the two major polls, Alabama, and not Oklahoma, is No. 1. The bloggers are also higher on Big East favorite West Virginia (21) than the coaches or AP writers. Pitt, South Florida and Cincinnati also received votes.

Kansas State's new eco-friendly mascot is the greatest thing ever. 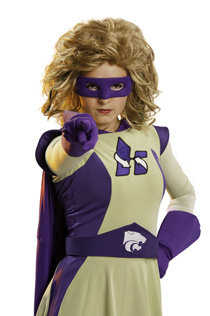 Just behind "your face is on probation," this is the Central Florida fan base's second greatest achievement of the offseason.

I haven't seen the episode yet, but I'm told that during Sunday night's True Blood, Jason Stackhouse could be seen watching Hunter Cantwell and Kolby Smith do work during Louisville's 2006 win at Kansas State. There are far worse five-year-old games he could have been watching.

Also, I own a "Bon Temps Football" shirt. It's pretty cool.

Class of 2012 point guard recruit Terry Rozier will be visiting Louisville on Sept. 24. Rozier has stated previously that U of L is his "dream school."

One day until Louisville Cardinal football.

Murray State has made its notes for Thursday night's game available. Of particular interest:

Last Time vs. Louisville
The Racers would like to forget their last visit into Papa John's Cardinal Stadium.  After tieing the game at 7-7 in the first quarter, the Cardinals took over from there and handed the Racers a 73-10 defeat.  It is the second largest margin in the series, with the biggest margin being a 105-0 Racer victory in 1932.

Rumor has it Charlie Strong has been playing the replay of the 105-0 loss on a continuous loop throughout the U of L training center this summer. The players are definitely tired of seeing and hearing about it.

Former Louisville recruit Ricardo Ledo has now canceled the press conference where he was expected to commit to Providence. The schools he does not choose will all be dodging a bullet.

The Big East will be releasing its full basketball schedule for the 2011-2012 season later today. If DePaul Day #2 is Senior Day, I'm going to start drinking right after the news breaks.

Speaking of basketball scheduling news, Louisville will host IUPUI (and new assistant David Padgett) on Wednesday, Dec. 7 at a time to be announced later.

And finally, Louisville Cardinal football in one day.