Former Louisville quarterback Brian Brohm has been picked up by the Las Vegas Locomotives (Locos) of the UFL.

Former Rice QB Chase Clement is the Locos' returning starter, so Brian will be competing with him and backups Zac Lee (Nebraska) and Chad Friehauf (Colorado Mines/Denver Broncos).

"The master plan was to bring in four quarterbacks originally, and we've done that before," said Head Coach Jim Fassel. "With Brian, a quarterback became available that we liked, so we are going to bring him in and take a look."

Brohm took the last available roster spot on the Locos. The team now has 70 players in training camp competing for 51 spots. Final cuts will be made Thursday, Sept. 8.

Even though Brian's introductory line of "you wanna tell me what the hell Carmody's Cafe is?" at my birthday party Friday night may have been inappropriate, and even though his dancing ultimately ruined said party, I'm still happy he's found somewhere to play...and I'm even more happy that somewhere is Vegas. 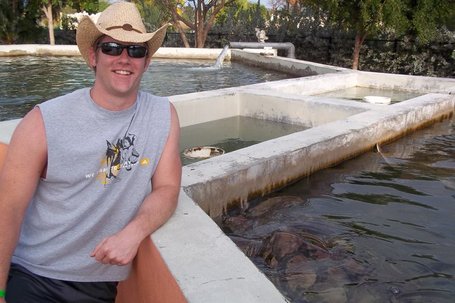 That hat is a disgrace.