Share All sharing options for: Will Stein predictably delightful at Monday press conference

We already went over the finer points of Charlie Strong's press conference yesterday, but the performance Will Stein gave at the podium yesterday afternoon hasn't yet garnered its due praise.

First of all, check out the shot the Courier has up on its site: 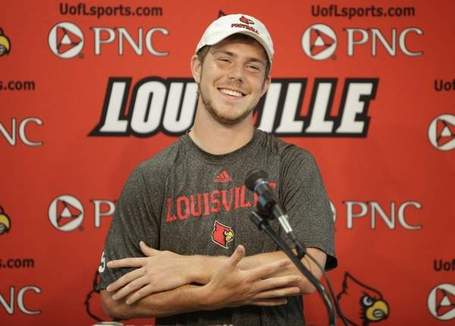 If that doesn't bring a smile to your face on a Tuesday morning, you're probably that evil prison guard from The Green Mile. Or Jafar. Everyone else in the world is smiling right now because of Will Stein's ubiquitous, positive aura.

You can check out the whole thing on the C-J, but here are some Steinlights from Will's afternoon behind the mic:

--Stein didn't officially find out he was the starter until yesterday. He assumed it because he'd been getting the majority of snaps with the first team, but to officially receive word was a great feeling.

--Thursday's game against Murray State will be the biggest start of his life.

--He's been approaching every practice, every workout like he's the starter since he arrived here as a walk-on. It was a mentality Jeff Brohm helped instill in him. Brohm always told him he was good enough to play here.

--"I always play with a chip on his shoulder, like I'm the man."

--Knows he needs to manage the game and can't just chuck the ball up downfield. "Coach always says, 'don't be Brett Favre.' That's his quote on me."

--Says he doesn't mind splitting time with Teddy Bridgewater and Dominique Brown as long as the team is winning.

--"I've always been a winner Whatever it takes to win, I'm going to do. I'm a team player, through and through."

--Doesn't think his size is as big of a deal as some make it out to be. "Being short is nothing new to me. I've learned how to play with it. If you're completing passes and throwing touchdowns, who cares?"

--I love Will Stein.