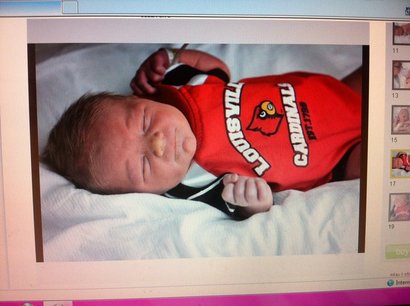 We're (I'm) way behind on news and notes, so we're (I'm) not going to spend as much time on each individual Cardinal head as usual.

It's old news at this point, but you can listen to me co-hosting KSR last Friday right here. Some disagreement occurred.

I did a little non-U of L writing for Carmody's Cafe. Please only respond if you liked it. I'm very sensitive.

Also, check out the sweet game-week Beef 'O Brady's deal on the site.

Dillon Graham, the zero-star recruit who earned offers from a host of major schools (including Louisville) after a strong summer performance, has committed to Florida according to Scout.com.

6. Louisville: The Cardinals lost 25 seniors and are the youngest team in the Big East. But there is much room for improvement and room to move up in these standings. For one, there is some talent at running back, receiver and tight end. The front seven should be solid. But injuries have taken a toll on the defensive line this fall. The cornerbacks are a gigantic question mark. So is quarterback, where we have no idea how Will Stein will do as the starter and what type of impact Teddy Bridgewater will make. Until those answers become clearer, Louisville stays here.

Kyle Kuric appeared on the Jim Rome Show yesterday, and his segment was relatively uneventful. He spoke briefly about his dunk against Notre Dame and whether or not he thinks college athletes should be paid. U of L SID Kenny Klein also got some solid love from Rome after the interview was over.

For those asking, I'm not sure if the audio is available anywhere on the Internet. If you can locate it, feel free to post in the comments and I'll throw it up (gross) here. (Here's at least a summary)

Andre Drummond's commitment to Connecticut on Friday wasn't exactly a shock, but the news that he was willing to walk-on in order to be eligible to play in the upcoming season was. Drummond had been expected to stay in the class of 2012, but his reclassification greatly bolsters UConn's chances of repeating as national champions. The Huskies just became a surefire preseason top ten squad, and will now be right up there with U of L and Syracuse when outlets begin to make their Big East predictions.

Former Louisville commit and eventual Central Florida signee Michael Chandler has failed to qualify and will attend a prep school this fall. Color me shocked.

U of L's athletic budget grew by a larger percentage over the past three years than any budget in the nation.

In basketball, ticket sales went from $10.9 million to $14 million, but the big jump came in suite rentals, which rocketed from $1.6 million in Freedom Hall to $5.7 million in the KFC Yum! Center.

Rodney Purvis is still a bit hesitant when he talks about U of L, but is now admitting that re-committing to Louisville "could be an option." I've been saying it for a little over a couple of months now, but I really think this is going to end up happening.

In case you hadn't heard, Central High running back and U of L recruit Ace Wales went absolutely notes on Tennessee Goodpasture last Friday. WDRB has the highlights.

Looks like it's going to be a hot one on Thursday: High is set at 99 with a low of 74 and virtually no chance of rain.

Two weeks of high school football play in Kentucky has pretty much confirmed that Trinity has zero in-state competition. Led by a host of Louisville recruits in the junior class, the Rocks have rolled a pair of Tennessee powers and now find themselves ranked No. 1 in the country by the Massey Rankings.

The 66 points Trinity hung on Nashville's Montgomery Bell Academy last Friday were the most MBA had surrendered since 1912.

Unless something unforeseen happens, James Quick will end up with the reputation of being one of the ten best high school football players this state has ever seen.

Charlie Strong is doing a pretty cool thing by having the head coaches for some of the other fall sports address the media before he goes on during the Monday of game weeks. You can see video of soccer coach Ken Lolla's (who is the man) media session right here.

The folks at Western Kentucky are upset that their season-opener against Kentucky will not be a true home game. Have to love this bit.

Second, it’s not unheard of to have the big boys come to Bowling Green. Last season, Louisville’s men’s basketball team came to Diddle Arena, and the Cardinals’ hoops program is widely respected — unlike Kentucky’s football program.

Former Louisville commit Michael Rocco has been named the starting quarterback at Virginia.

And finally, a good story from Rick Bozich on Will Stein's younger brother Nate, who injured his neck during Trinity's win last Friday. Sounds like it could have been much worse than it is.