Share All sharing options for: Wednesday morning news and notes 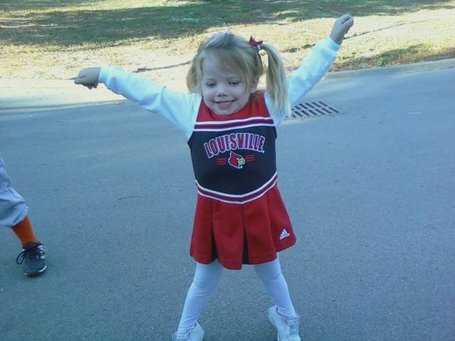 "My wife won't stop begging me to send this picture..." OK, Jerry. I'm sure in five minutes your co-workers are already going to be sick of hearing about this.

If we're gonna do this - if we're gonna make your kid a star- then all I ask is for you to be honest with me. IT'S ALL I ASK, JERRY.

All right, news and notes time.

So now Lexington Basketball Academy wants to bring its sideshow to the Yum Center, and John Calipari is publicly inviting Denny Crum to coach the former Wildcat stars?

Jody Demling (the enemy) has about as complete a Louisville basketball summer recruiting report as you could ask for. He lists "at least" 16 players in the class of 2012 that the Cardinals are still in the running for, and gives a brief rundown of each in an attached story (I can't link because the C-J site is currently not working). The "at least" is crucial here, because the list does not include a particular recruit from Houston of the Gallus Domesticus variety.

I've seen that UK fans are now celebrating the commitment of Seneca's Tyrone Pearson, who (again) has committed to and decommitted from Louisville twice in the past six months.

I spent some time with someone very close to a UK football assistant last weekend, and that person quoted said assistant as saying the Wildcats - like Louisville - were no longer recruiting Pearson. He added that Pearson had been trying to call members of the Kentucky staff from Florida...while his Seneca team practiced without him in Louisville.

This kid's a major talent, but I'll eat a third shoe of that guy from Basketball Prospectus if he ends up playing Division I football next year.

Five-star class of 2013 sharp-shooter Brannen Greene is on campus taking an unofficial visit as you read this. He will be chronicling (TM) his experience on a blog sometime later this week. I can't remember exactly what blog it is, and knew with absolute certainty when I started typing this bullet that I was too lazy to look it up.

My left shoulder is super jacked up, you guys. I tore my rotator cuff playing baseball when I was 18, and in lieu of appropriate medical attention I opted to do nothing. I'm actually 100% certain that I went bowling a night later. I remember because Craig tried to be funny and he typed my name on the score screen as "Rotator Cup" because he'd always thought that's what it was. We laughed and laughed. Not as hard as we laughed at "ButtMunch22," but we were young.

Anyway, my shoulder pops like 85 times a day now so that's something you're going to have to be prepared to deal with if you're hoping to spend a significant amount of time in bed with me watching TV or movies that demand undivided attention. Because it's distracting. And I will complain about it. A lot.

A bit more info. on that Earl Clark charity game.

The game will tip at 7 p.m. Friday night at Bullitt East. Tickets are $12 and will be only available at the door, which opens an hour before the game (6 p.m., Leigh). The charity being benefited is Kentuckiana Youth for Christ. If you want to see the roster again (replete with Derrick Caracter name misspelling...so 2006), you can scroll down like half a page. 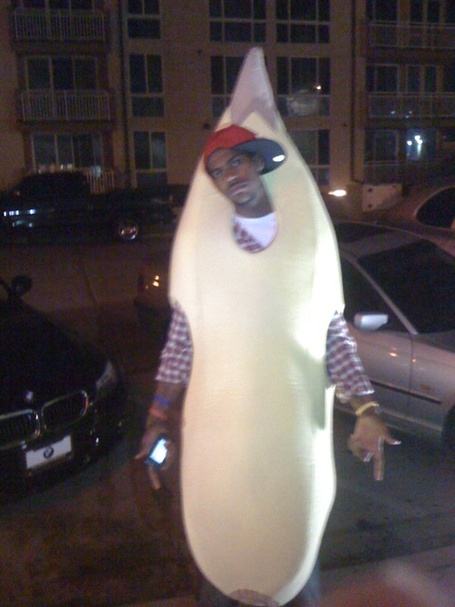 Card Chronicle fact: The original posting of this picture also represents the genesis of the term "Krag1N1."

Football/basketball star Mekale McKay recently took a visit to Central Florida and reportedly "loved" it. McKay also says that former U of L commit DaMarcus Smith is "like a brother." McKay - a wide receiver on the gridiron - has an offer from Louisville to play football.

You should do this to your carpet. Especially if you live alone or with an especially hostile woman. If you're alone, then whatevs. That's for you, man. You enjoy it. If your wife's going to kill you over carpet, then whatevs. You're probably already dead inside so you might as well go out in style. On national news. With sick U of L carpet.

And finally, you can check out video of Charlie Strong speaking at Big East media day right here.