Share All sharing options for: Three positions to watch as fall camp opens

Practice doesn't actually begin until tomorrow morning, but the Louisville football team will be meeting this evening for a team dinner that will signify the beginning of fall camp. That's right, it's football season has returned to Floyd Street.

Much of the media is likely to spend a hefty chunk of the next month's Louisville football coverage on a pair of sexy "position battles," but the truth is both spots were sewn up during spring practice.

Barring a serious injury to either, Will Stein is going to be your starting quarterback on Sept. 1, and Victor Anderson is going to be your starting running back that same evening. Each veteran is going to split time with their backups - the equal-parts youthful and exciting Teddy Bridgewater and Jeremy Wright - and there's certainly a chance that neither Stein nor Anderson will be starting come November and December. This doesn't change the fact that a true position battle does not appear to be on the brink of unfolding over the course of the next five weeks.

Like his basketball counterpart at Louisville, head coach Charlie Strong loves to hype up his upperclassmen, and in recent weeks has consistently praised a group of players that includes Stein and Anderson. That, coupled with a pair of strong spring performances, provides Peyton Siva's face clear evidence that it will take an injury or a monumental collapse for either to lose their starting job between now and when toe meets leather against Murray State.

So while you should be prepared for a flood of "former walk-on vs. All-American recruit at quarterback" pieces, here are three far more important position battles to watch for as fall camp opens.

The graduations of Johnny Patrick and Bobby Burns had already left this as perhaps the position of greatest need for Louisville heading into the 2011 season. And then Darius Ashley got hit with his second DUI of the calendar year. The unit is now being universally dubbed as the worst in the Big East, and consistently referenced as one of the biggest reasons the Cardinals aren't a legitimate threat to win the league.

What makes the cornerback position so intriguing is the mix of unproven veterans and talented youngsters. Because some of the freshmen are almost certain to see decent playing time in order to prepare for the future, the difference between the veteran who starts and the veteran who ends up not seeing his name on the two-deep is going to be razor-thin. For guys like Titus Teague, Anthony Conner, Jordan Paschal, Preston Pace and Zed Evans, what happens over the next handful of weeks might very well decide who gets a shot to be the unit's lockdown corner and who spends the vast majority of the season on the sidelines.

Pay special attention to the freshman duo of Andrew Johnson and Charles Gaines. If either of these highly-recruited greenies finds himself at No. 2 on the depth chart heading into the season-opener, it means the coaching staff thinks they may have found something special. Remember that Hakeem Smith came from seemingly out-of-nowhere to be listed as Shenard Holton's backup heading into the opener against Kentucky, and then proceeded to tear it up in that game and just about every other in his freshman year. 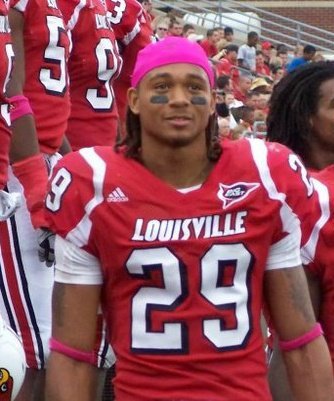 And the man can pull off pink

The other major reason given by those who assert Louisville can't win big in 2011 is the loss of four starters on the offensive line. The good news for U of L fans is that Mario Benavides is one of the best centers in the country, and Alex Kupper and Ryan Kessling both gained some valuable experience last season as backups. The unit needs guys like Hector Hernandez, Jake Smith, Chris Acosta and Kamran Joyer to step up and prove their reliability during camp.

Any injury to this unit would be a huge blow. Benavides had knee surgery during the spring, and it's not a stretch to say that losing him would be a bigger blow than losing any other player on the roster.

No August news is good news as far as the O-line is concerned. Of course I also wouldn't get too excited if reports of Greg Scruggs, B.J. Butler and company "dominating" practice become the norm.

Doug Beaumont is gone, but this still figures to be one of the more enjoyable units to follow both this month and during the season. There is a plethora of young talent at the position, and seeing which one of those players can distance themselves from the rest of the group is one of the largest lingering questions heading into the year.

Josh Bellamy is a senior and the team's leading returning pass-catcher, but his Hollywood receiver act seemed to land him in the coaching doghouse at times last season. Strong said at one point during the year that he actually welcomed Bellamy's brash attitude, but he appeared less fond of the junior college transfer's occasional disappearing act. Bellamy caught a combined ten passes and two touchdowns in back-to-back wins over Arkansas State and Memphis, but then followed that up by reeling in just three balls for nine yards in the Cards' next three games.

Bellamy will almost certainly start against Murray State, but don't be surprised if an "OR" pops up between his name and a guy like Michaelee Harris or DeVante Parker when the depth chart gets its first update of fall camp. Strong knows how to get a player's attention, and he knows the types of guys who will respond properly to a message like that.

Andrell Smith was U of L's most consistent possession receiver in 2010, and figures to had into camp with massive lead for the offense's No. 2 receiver spot. You'll see him run a lot of the routes Josh Chichester handled before he moved to tight end.

Where things get really interesting is the "H" receiver spot, where walk-on Scott Radcliff is currently listed as the starter. Radcliff is a former teammate of Stein's who reportedly saw a bevy of balls thrown his way during the spring. His current backup is still listed as Stephan Robinson, who was recently moved to cornerback because of the need there. Basically, the starting position here may as well be listed as "open."

Jarrett Davis, Kai Dominguez, Damian Copeland and true freshman Eli Rogers are all more than talented enough to garner significant playing time, which, again, is why the competition at this spot is so captivating.