Share All sharing options for: Former Florida cornerback is now a Cardinal

Multiple sources, including Mark Ennis of Big East Coast Bias and Mike Hughes of Scout.com, are reporting that former Florida cornerback Adrian Bushell has enrolled at Louisville and is practicing with the team. He is reportedly able to play immediately.

Bushell is a former four-star recruit who was expected to compete for a starting job at Florida heading into the 2010 season. He missed most of spring practice because of academic issues, however, and wound up transferring to Coffeyville (KS) Community College, where he spent last season playing some on both sides of the ball.

Bushell finished his lone season as a Gator with 13 tackles and one interception (against Florida State). Last year at Coffeyville he recorded 31 tackles, picked off two passes and notched 11 pass breakups in nine games. He also returned kicks and punts, caught three passes, and carried the ball ten times. 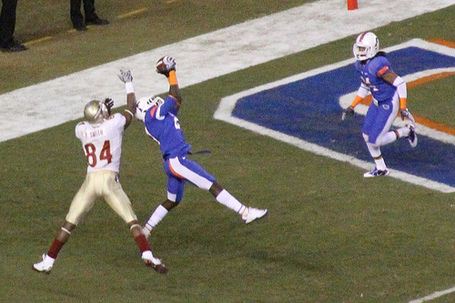 If he was good enough to play in the '09 Florida secondary as a freshman, I'd say it's safe to say we're going to see Mr. Bushell on the field at some point in the weeks ahead. Assuming he's been 100% cleared and is good-to-go-academically, this is wonderful news.

Not a bad start to opening week.