Share All sharing options for: Record crowd watches No. 1 Louisville top No. 2 UCLA

In a rematch of last December's classic 5-4 Louisville victory in the national quarterfinals, the top-ranked Cardinal soccer team bested No. 2 UCLA 2-0 Saturday night at Cardinal park.

A record crowd of nearly 8,000 watched as U of L got an own goal from the Bruins in the first half and a nifty score from All-American Colin Rolfe just 89 seconds into the second 45 minutes.

"From a soccer standpoint, this was exactly what we needed," U of L coach Ken Lolla said. "We needed to play against a good team and be pushed."

Louisville finished the game with 11 shots, including six on goal. UCLA finished with nine shots, with two on goal. Cardinal keeper Andre Boudreaux recorded two saves on his way to the shutout.

The Cards return to the pitch on Friday when they travel to Wake Forest for a match with the 13th-ranked Demon Deacons. 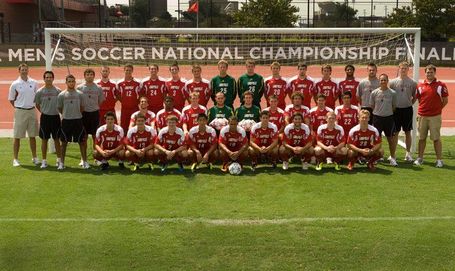