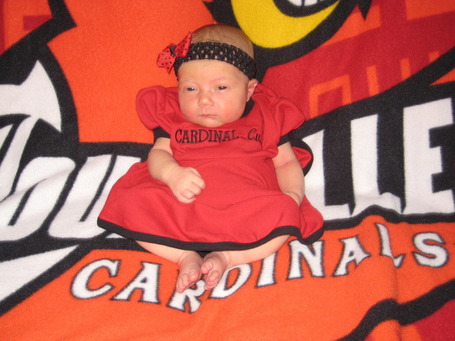 This is Savannah Williams, and at 3-days-old she is officially the youngest baby 'Cloid to be featured on the site. Yes, that's absolutely a challenge. Savannah is also a third cousin of Brian Kiser, so look for her to shoot the rock.

Quick programming note: I'll be co-hosting Kentucky Sports Radio with Matt Jones this morning from 10 a.m. until noon. You can listen in on 1080 AM or via the live stream right here.

The big news on Thursday was the eligibility (or lack thereof) of freshman guard Kevin Ware. Rick Pitino says Ware's situation is entirely an academic issue and has nothing to do with the ongoing NCAA investigation into recruiting practices at Central Florida (where Ware once committed). Of course Pitino also said Ware was "good to go" and would be on campus by last weekend.

Whatever the case, the delay is quite annoying. There might not be another player on the team who needs a head start more than Ware, whom the coaching staff is hoping can pick up the point guard position enough to become a reliable backup to Peyton Siva. Him not being eligible until January would almost make his freshman year a complete waste.

Ware, for his part, is taking all of this understandably hard.

U of L held its annual "50-Yardline Dinner" at Papa John's Cardinal Stadium Thursday evening, and while the guest list was comprised almost entirely of rich, old white guys and their far younger/more attractive significant others, CC did have a man on the inside who shared a few interesting pieces of information from the dinner.

--Running backs coach Kenny Carter said (privately) that sophomore Jeremy Wright could potentially be "the best running back I've ever coached, and I've had 5 or 6 guys play in the NFL."

--There was a great deal of talk (again, privately) that former Brandon Bender ally Rodney Carter is also being investigated by the NCAA. Carter, who was also named in the now infamous NYT story, has been attempting to start up Super Student Athletes, INC (SSA), which he is hoping will be the Louisville equivalent of Florida's IMG Academy.

--Tom Jurich took the mic at one point and spoke at length about his love for the Big East, saying it was a perfect fit for Louisville and that if the choice were up to him, U of L would never leave.

--There were white chocolate Cardinal birds for dessert. 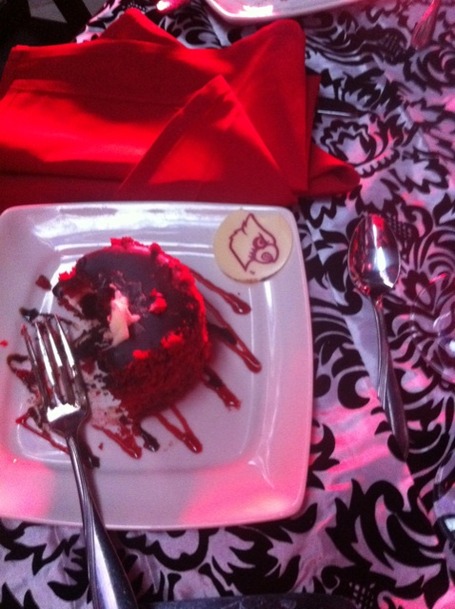 Spencer Hall previews the Big East (the BCS' mini-cooper), and it's predictably brilliant. 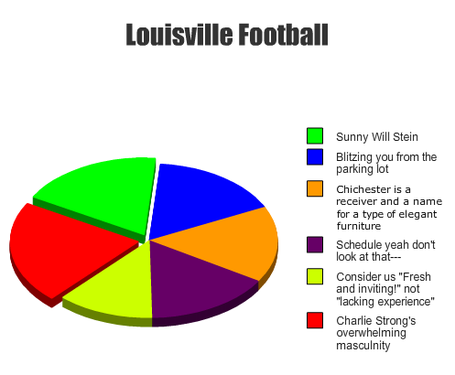 THINGS YOU CAN PRETEND TO KNOW: Hey, there, Louisville! You're looking fresh and charming. We mean really fresh, as in losing large chunks of the team that turned around the Kragthorpe-induced program slide last year with a win in the St. Petersburg Bowl. Only three offensive starters and six defensive starters return, so when discussing Louisville just mention the "promise of new things!" not "oh hell this roster is filled with large infants." The schedule's forbidding, too: mention trips to Kentucky, North Carolina, Cincinnati, West Virginia, UConn and South Florida, and then mention it might be hard for even Charlie Strong's superb coaching staff to eke more than seven wins out of this schedule.

Then again, they're not lacking for sunshine, or for a replacement at running back for the departed Bilal Powell since Victor Anderson appears to be recovered from a long streak of injuries. Play up the diverse receiving options, or the skills of All-Big East safety Hakeem Smith. Talk a lot about "learning," and how they'll "play a lot better at the end of the year than at the beginning," because as inexperienced as this team is, the first part of the season could resemble a series of extremely hostile tryouts for Louisville. Try to avoid saying patronizing things like, "Aw, widdle baby Cardinals," even though the temptation will be strong because AWWW WIDDLE BABY CARDINALS SO CUUUUTE--

SEASON CRUX: If they beat Kentucky in week three, a victory over Marshall on October 1st would give them four wins and a good down payment on bowl eligibility. They'll need it: it's nasty the rest of the way.

Kris Dunn, considered by many to be the best point guard in the class of 2012, committed to Providence on Wednesday. You may remember that Ricardo Ledo, a player some believe is the second best floor general in the class, committed to PC earlier this season before re-opening his recruitment. He still says, however, that he is considering the Friars.

So how could all these elite point guards possibly be so high on a program like Providence? I'd say there's a strong possibility that it has something to do with a certain other Friar guard who has the potential to significantly pad any PG's assist total. 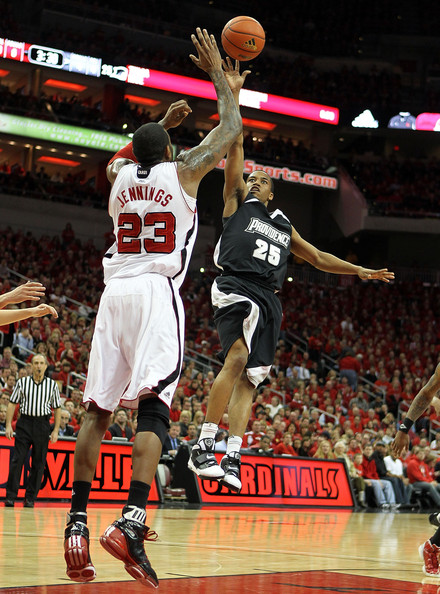 Good news for Michael Bush, who has had the DUI charges against him dropped.

Central High sophomore D'Angelo Russell, who was offered a scholarship by Rick Pitino in July, will take an unofficial visit to Indiana on Sunday.

Congratulations to former Louisville running back Tony Stallings, who will replace Stefan LeFors as a commentator on WHAS radio broadcasts of Cardinal football games this season. LeFors stepped down after being named the new head football coach at Christian Academy.

Class of 2012 commits DeAndre Herron and Sid Anvoots are already BFFAEEIDCCTTGITW (Best Friends Forever And Ever Even If Drunk College Chicks Try To Get In The Way). 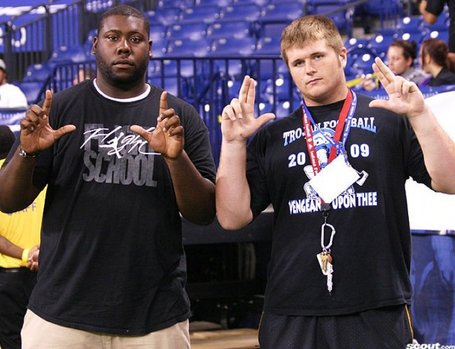 Undefeated until their loss in the 2010 NCAA Final to Akron, the Cardinals bring back a loaded stable of key players, including standout striker Colin Rolfe, midfield ace Dylan Mares and centerback Austin Berry. A repeat Big East title is a good bet and anything less than a championship would be a disappointment for a team that should produce more than a half-dozen pros.

One of the most exciting squads in 2010 returns all 11 starters, and the extra experience for a team dominated by underclassmen could give the Bruins the edge in 2011. Playmaker Kelyn Rowe is at the top of the MLS Draft board while forwards Victor Chavez and Chandler Hoffman will be tough to stop all season. Goalkeeper Brian Rowe is one of the best in the nation.

The pair will meet tomorrow evening at 7 p.m. at Cardinal Park.

And finally, Murray State is offering a bus to transport fans to next Thursday's football game at Papa John's Cardinal Stadium. Yeah, a LOSER BUS...it's been a long week...I don't know...wake me up when you're ready to drink.