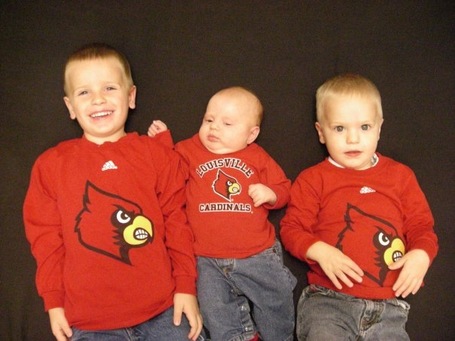 When I think "class" and "high-society" and "Go Diego Go," I always think about the Daniels kids. Especially that one in the middle.

Tip of the cap to father Paul, who actually had this picture saved as "(day of the week) morning Cardinal news and notes." Your diligence was not overlooked.

I will be dropping some news about the site here in a couple of hours. Just thought some forewarning was due.

Terrible news for Louisville QB commit Will Gardner, who has learned that the knee injury he suffered last Friday is an ACL tear that will cost him the rest of his senior season. Gardner informed Cardinal coaches of the news on Monday, and was reassured that U of L will be sticking with him through his rehabilitation.

Something tells me there will be a tad less drama in this relationship than there was with the last injured QB commit Louisville chose to stay behind.

Bellarmine released its full schedule on Monday, and it includes a trip to the KFC Yum Center on Thursday, Nov. 3 for an exhibition game against Louisville. The reigning D-II champs will also face Duke and Xavier before beginning regular season play.

There have been some reports that Corvin Lamb is currently nursing a minor injury, and now it appears the same can be said for Senorise Perry.

Also dealing with minor injuries are a host of players on the defensive line including Greg Scruggs, Brandon Dunn and B.J. Butler.

The more I hear about Mario Benavides' injury, the more concerned I get. There have been rumors that the injury to his foot is an infection which could leave him sidelined at least until the Kentucky game. Here's hoping that isn't the case.

With Benavides out, sophomore Kamran Joyer has been taking (or giving) the first team snaps at center. True freshman John Miller has also been working a little bit at the position.

Gerod Holliman played in his first game for Milford Academy on Saturday, and recorded an interception in a 34-28 victory. Holliman is reportedly still hoping to enroll at U of L in January.

U of L has made the final five for blue chip class of 2012 prospect Jake Layman. The 6-9 Mass. forward said yesterday that he will take official visits to Louisville, Maryland, Syracuse and Florida this fall. He added that he is also considering Wake Forest, but is not sure whether or not he will visit.

I woke up this morning and somehow stumbled upon the news that Jeff Foxworthy is a Kentucky colonel. This instantly made me think about how much better at life I am than Jeff Foxworthy, and yet here I am stuck not being able to sincerely place "Col." in front of my name in any situation.

A quick bit of research shows that the two biggest keys to becoming a colonel (outside of strong moral character, speaking with grace, and all that shit) are being at least 18-years-old and getting a recommendation from a current colonel. So, to all of our current Card Chronicle colonels: I want in.

"Colonel Mike" has the potential to be a friggin' Louisville superhero.

According to Keith Niebuhr of Rivals, Louisville commit Larry Jefferson is still hearing from schools like Auburn, LSU and North Carolina.

See, this is exactly the type of problem Colonel Mike could be taking care of.

A little Nick Dawson news out of South Carolina.

LB Nick Dawson (6-3, 220) of Charlotte was planning to visit Clemson last week but never got it confirmed with the Tigers, so the visit didn't come off. He has had Clemson in his top five along with Louisville, Tennessee, UNC and Miami, but right now Dawson isn't sure he's a take for the Tigers. He recently visited Louisville, which is where his father lives, and is strong on the Cardinals but is not ready to name a favorite.

Josh Pastner announced last night that Luke Walton will be joining the Memphis staff until the NBA lockout ends. Normal.

Pete Carroll should have been an actor.

And finally, it was pointed out to me yesterday that Chane Behanan has changed his profile picture to a shot taken by CC correspondent Matt Swafford during the Bahamas trip. Does this mean Chane checks Card Chronicle 25 times a day? I don't see how it could possibly mean anything else.