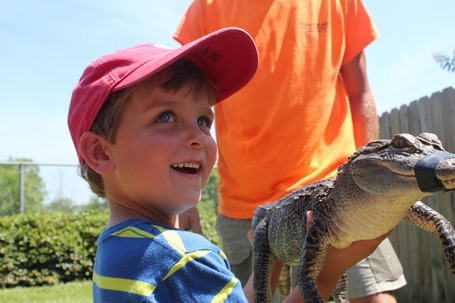 This is Ben (peep the name under the hat), the second of my three nephews and the most likely to one day man the middle for the Cardinal defense. Now there is some debate over whether or not he's actually wearing a U of L hat, but he gets the benefit of the doubt because he's a Rutherford. Also, the pure, unadulterated joy of holding a baby crocodile should always be celebrated.

The Louisville football team wrapped up fall camp on Saturday with an intrasquad scrimmage. C.L. Brown has a few notes from the day to supplement what U of L has already given us (check out the post below this one).

It was closed to the media, but check the school’s official website for a brief summary. From talking to several coaches and players, it seems that best performances came from Victor Anderson and the Cards defensive line led by Randy Salmon, Jamaine Brooks and Brandon Dunn.

"I like the way Vic Anderson ran the ball, he got behind his pads and had some really outstanding runs," U of L coach Charlie Strong said.

**Offensive coordinator Mike Sanford: "The No. 1 positive was that we scored, I think we scored 11 touchdowns. That’s a positive. The other positive, when we went goal line we scored three out of four."

Elite class of 13 point guard Kasey Hill has narrowed his list of college choices to sevens schools, and it's a group that includes Louisville. Here's what he says about each of his remaining gentlemen callers.

Florida: "I always have great conversations with Coach (Billy) Donovan. He has also been in the NBA at the point guard position, so he could be someone I could really learn under."

Florida State: "I have a great relationship with Stan Jones. We talk about a lot of stuff outside of basketball. We have fun and have bonded really well."

South Florida: "I love the new facilities at USF. I actually visited down there recently. I also have to say I trust their staff the most because of Stan Heath. I played AAU with his son and we have known each other since about the 6th grade. He has always helped me with pure-life stuff.

Missouri: "I have a really nice relationship with Tim Fuller. He seems really laid back like me, so that helps a lot too."

NC State: "I have talked to the NC State coaches a couple of times, and I like how a point guard can come in and take the ball and produce. They also like to get after it on both end of the court, so that’s a plus."

Louisville: "Rick Pitino has always told me great things about the campus at Louisville. He likes to keep the ball in a point guard’s hands, too. I also know his son, Richard Pitino, from when he was at Florida, so that helps."

Kentucky: "Coach (John) Calipari is a great coach. He is known for putting point guards in the NBA. He lets his players play and showcase their talents."

Ace Wales on Central Florida: "I haven't dropped UCF yet, but with all the probation stuff, it is very likely. I don't want to get into all that."

I enjoy that quote.

Cardinal quarterback commit Will Gardner injured his knee in the second quarter of his 2011 debut and did not return to the game. His Coffee County team did pull off a 28-6 victory, however. Here's hoping Will is back in action soon.

Andrew Johnson really wishes the rest of the secondary had let him in on their "no smile" pact before this picture was taken. 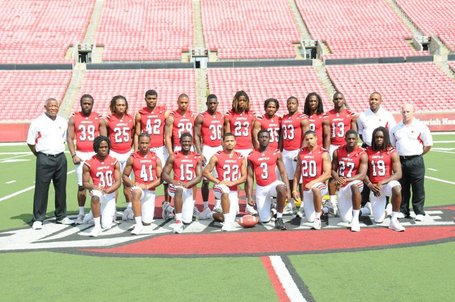 Soccer America previews the No. 1 Louisville Cardinals. U of L shutout Michigan in its final exhibition tuneup over the weekend.

It is not possible for me to be more excited about DeVante Parker. Also, a quick shoutout to WDRB's Pat Doney. He's done some tremendous stuff on Louisville this summer and utilizes the Internet about as well as any member of the local media.

A feature piece on Josh Bellamy, who just may be the star of fall camp.

I continue to be surprised by Rick Pitino not even mentioning the possibility of Stephan Van Treese backing up Gorgui Dieng at the five spot. For now, Pitino is putting his complete faith in freshman Zach Price, who all of the sudden is one of the more important players on the team.

“We’re going to spend the next two months getting him ready for that,” Pitino said. “I think that he can do it. He’s smart. He’s physical. He’s a left-hander. He’s got the body — he’s not a lightweight.”

The women's soccer team opened its season with a 5-0 shellacking of Eastern Kentucky. "Shellacking." Say it with me. Fun word. Simple way to brighten your Monday.