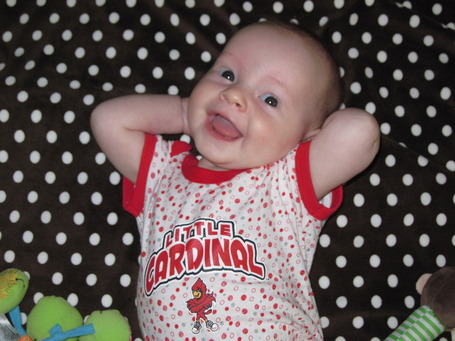 I've been getting a lot of emails from guys saying, "my wife wanted me to email you this pic of our kid to put on the site" recently. I'm not buying it, fellas. This is the male equivalent of putting your kid on Toddlers and Tiaras, and that's OK. Just admit that you want this and embrace your newfound fame.

Big East media day has come and gone, and the only two items of any real significance were the results of the annual media poll and the announcement of TCU's 2012 home/away league schedule.

On the first point, I'm not sure I entirely understand the outrage of Louisville fans who can't believe anyone could foresee this team finishing near the bottom of the conference. U of L went 6-6 last season and lost 25 seniors, including four offensive linemen, a four-year starter at corner, and one of the nation's best running backs. The only teams, on paper, that you could put Louisville ahead of other than Rutgers are Connecticut and Cincinnati. One of those teams (Cincinnati) just may boast the best quarterback, wide receiver and running back in the conference, and the other (UConn) is the defending league champion.

Do I think Louisville will finish better than 7th in the Big East this season? Yes. Am I blown away that other people could pick them 7th or 8th in the league? No.

As for TCU, I was a little blown away when news first leaked that they would be coming to Papa John's Cardinal Stadium in 2012, since we're already slated to host four league games that year. It only makes sense that the team will be traveling to Texas next season. In addition to balancing out the yearly home/away schedule, the addition of TCU also adds a little jolt to a group of opponents (Syracuse, Pitt, Rutgers) who have packed less of an excitement punch than their opponents (a group that includes rivals West Virginia and Cincinnati) in recent years. Balance is a good thing.

As for the quartet of U of L players who were supposed to make the trip to Newport, they ended up never making it because of travel issues. The frustrations of Vic Anderson, Greg Scruggs, Chris Philpott and Josh Chichester ended up playing out rather humorously on Twitter yesterday. Howie Lindsey tells the tale.

Eric Crawford, who has the privilege of sharing a birthday with Sir Charles Strong, jumps in on the Sunny Will Stein craze by showing us how America's quarterback feels about the new debt ceiling. 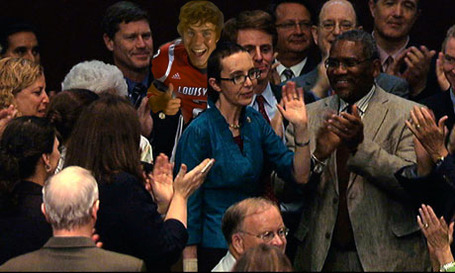 Brannen Greene, perhaps the best shooter in the class of 2013, will take an unofficial visit to U of L on Wednesday.

The Trinity football team, which features several juniors who will be heavily recruited by Louisville, is ranked No. 20 in the country to start the season by MaxPreps.com.

The L.A. Times (via Sports Network) believes Louisville will fall back to its '09 form in its second year under head coach Charlie Strong and picks the Cards to finish last in the Big East.

Goal.com has the Louisville soccer team at No. 4 in its preseason top 25. The Cards will open the season on Aug. 27 (the kid's birthday) against No. 2 UCLA.

A replay of the Beef O'Brady's Bowl (we won) will be shown tomorrow night on ESPNU at 9 p.m.

And finally, if you haven't done so yet, please make sure you check out "Carmody's Cafe" and sign up for the site. You're not going to get any spam, I promise, just updates for a new project I'm working on that I'm pretty excited about.