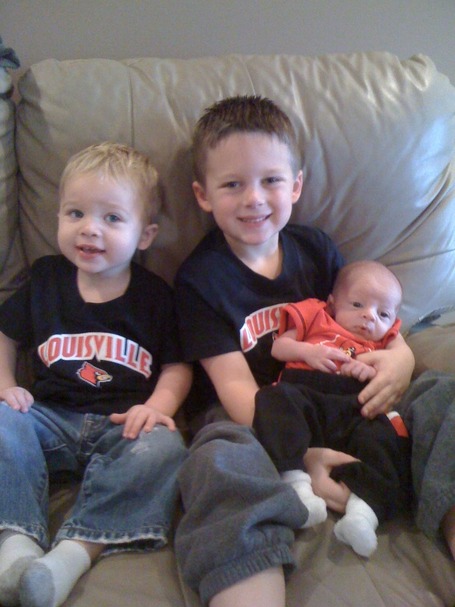 Continue to be surprised that there are this many children in Louisville. I consider them all my nephews and nieces at this point. One day Uncle Mike will show all of you his VHS copy of Mac & Me. When you're old enough (wheelchair scene is a bit heavy).

The most newsworthy bit of information to come out of camp thus far is that Mario Benavides has missed considerable time with a foot injury. I made the statement before the season that Benavides is the most valuable player on the team, and I stand by that. Here's hoping he's at least near 100% by Sept. 1...and that he gets a fairly significant second half rest on that evening.

Charlie Strong will be serving as the honorary chair for the second annual Cystic Fibrosis Climb for Life at PJCS on Sept. 24. 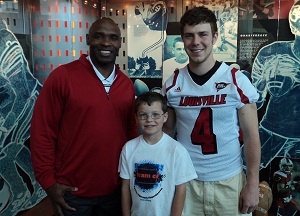 Those interested in registering or looking for more information can do so by checking out the official site.

If I'm climbing, you should be climbing.

In addition to his appearance at Cardinal Caravan last night, Rick Pitino also took a little bit of time to talk to the football team on Thursday. I'm not sure if it was a "dealing with off-the-field controversy" thing, but whatever the reason he made quite an impression.

It's old news at this point, but the Cardinal football team has made significant strides academically under Charlie Strong.

Under Strong's eye in the spring of 2010, his first year at the helm of the program, 40 football players were named to the athletic director's academic honor for achieving at least a 3.0 grade-point average, 13 were named to the dean's list (requires semester GPA of 3.5-3.999 and no grades of `C' or below) and, collectively, the team secured a 2.7 grade-point average.

The following semester, the fall of 2010, the Cardinals' football team had 37 student-athletes recognized on the athletic director's academic honor roll, with 11 earning dean's list status and one capturing the dean's scholar award (one semester in which student earns all grades of `A+' or `A' and no `A-`). In the spring of this year, two student-athletes were named dean's scholars, 12 reached the dean's list and 36 Cardinals were tabbed athletic director's academic honor roll members. The team maintained a 2.65 grade-point average.

With the completion of the summer courses, the Cardinals' freshman recruiting class posted its second-straight above 3.0-grade point average. In 2010, the group earned a 3.44 GPA, and this summer, the newcomers finished with a 3.185 mark.

Congrats to all the Cards for their hard-work in the classroom.

Tyler Gabbert and Central Florida; I think that could be a good fit.

In the biggest case of over-reacting to the Clint Hurtt news yet, Wave-3 actually went on U of L's campus to get students' thoughts on the issue. I thought these pieces were reserved for events like a local team crashing the Final Four or a head coach revealing that he went on a killing spree in his younger days.

Also, if law school doesn't work out, that Patrick Smith kid has an on-camera future.

Congratulations to soccer Cards Colin Rolfe and Austin Berry, who were both named to the Hermann Trophy Watch List for the 2011 season yesterday.

A roundtable discussion including Rick Pitino, other coaches & ESPN.com's Andy Katz air on ESPNU this evening at  5 p.m.

Really glad the NCAA is coming around the whole cream cheese thing. It's my understanding that there are now no major issues in college sports left to address.

Villanova team captain Isaiah Armwood announced yesterday that he is in search of more playing time and will transfer.

The amount of angry responses I've gotten to a #LouisvilliansAgainstNorthOldham tweet has really opened my eyes to the number of people on Twitter who follow me but don't actually read the site. You'd think it'd be the other way around.

The Louisville soccer team is the preseason choice to win the Big East's Red Division, while Connecticut is the favorite in the Blue. Also, the Big East uses divisions in soccer. I'll admit it, that's the biggest piece of news I took away from this story.

C.L. Brown continues his position-by-position preview of the 2011 Cardinal football team by checking in with the running backs. I'm told there's potential at the position.

I will be on ESPN Radio 680 a.m. tomorrow morning around 9:30. Who doesn't listen to sports radio on Saturday mornings?

And finally, RugbyMag.com takes a look at the emerging Louisville (you guessed it) rugby program.