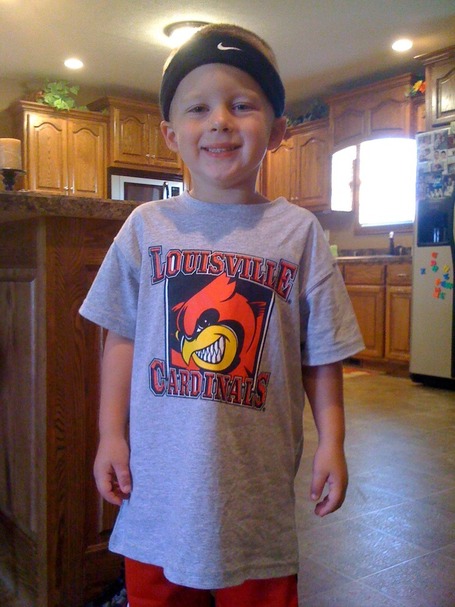 It's like 55% this kid could beat me in 1-on-1. The intimidation of a headband is worth at least five points against Mike Rutherford.

The Clint Hurtt stuff isn't good, there's no doubt about that, but I think a large faction of the fan base is blowing this thing - at least as it stands right now - a bit out of proportion. Yahoo spent 11 months working on this story and the NCAA has reportedly spent five months investigating it. That's a lot of time and manpower, and there have currently been zero allegations levied against the U of L football program, and zero hints that any are forthcoming.

All of this talk about "scandal" and "Louisville" is beginning to remind me of the "Pitino trial." Rick Pitino was never accused of anything illegal, and neither has the Cardinal football program. As it stands right now, the worst case scenario for U of L involves Hurtt being fired and the program's image taking a hit. That's it.

I also don't understand the critics who are saying that Strong and Tom Jurich needed to "say more" or "take a definitive stance." This news broke on Tuesday night. It's not a pre-written obituary situation. How can Strong or Jurich say they are 100% behind Hurtt or imply that his future might be in jeopardy when so little is known about the issue at hand? The pair have handled this situation precisely the way the heads of any other BCS football program would have. They might have actually said more than a handful of coaches and ADs.

Everyone needs to just calm down a hair and give this stuff time to settle.

With that out of the way...THE 2011 LOUISVILLE FOOTBALL SEASON BEGINS TWO WEEKS FROM TODAY. 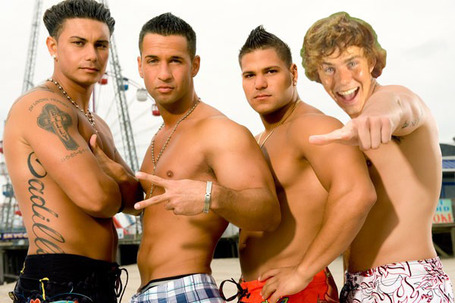 A&F would be proud to have Will rep a hooded henley or two. New Shore tonight.

In "the timing couldn't possibly be better for the subject" news, the University of Central Florida announced on Wednesday that it has received an official notice of inquiry from the NCAA regarding potential recruiting violations in the school's football and men's basketball program.

Additionally, ESPN gives us the news that reigning Card Chronicle Least Cool Person in the World Brandon Bender was interviewed last week by NCAA investigators as well as legal counsel retained by the university.

What college program wouldn't want to hire this guy?

Cardinal football players went through their final two-a-day session on Wednesday and will officially wrap up camp today. I'm told the excitement level is high.

Louisville's Christmas Eve Eve home game against Western Kentucky will be televised by ESPN2. If we're lucky the broadcast will be half as good as the one the WKU folks gave us last year. Should be solid holiday fun.

Denny Crum will be one of six inductees into the Missouri Valley Conference Hall of Fame on March 2 in St. Louis. Louisville was a member of the MVC for his first four years as a head coach here. I can only assume he will be thanking Go Cards Attitude at some point during his speech.

The news that two of Louisville's three basketball captains for the upcoming season will be walk-ons begs the question: Where would you set the over/under for the number of 2011-2012 Cardinal games where U of L's "super walk-ons" will be referenced at least once by an announcer?

Assuming the Cards play somewhere between 35-40 games this year, I'm putting it at 21. There is no part of me that believes that number might be too high.

Drew Deener claims he's "still debating" dropping the hottest male athlete of the year nugget when Elisha Justice checks in during WHAS broadcasts this season. That and making a vague Chicken Knowles reference during the Real Deal Shockers game keeps him on the "cool with" list for the time being.

Big news for the baseball team as Cardinal pitchers Derek Self and Justin Amlung, who were each selected in the 2011 MLB Draft, have both opted to return to Louisville for another collegiate season.

"We're excited to have a pair of experienced and talented pitchers like Derek and Justin returning for 2012," said Louisville head coach Dan McDonnell. "Those two guys will eventually play professional baseball, but right now, they're dedicated and committed to leading the University of Louisville to another BIG EAST championship and another NCAA Championship bid in 2012."

Former Cardinal safety Curry Burns is now apparently trying to make it as an actor/model. His highly "energentic" personality figures to serve him well. Seriously, Curry, get someone to edit that page. I love and miss you.

The U of L women's soccer team begins its 2011 season today by traveling to Eastern Kentucky for a 5 p.m. game. The Cards topped the Colonels 4-1 a season ago.

The North Oldham All-Stars will open play at the Little League World Series tomorrow night at 8 p.m. against the de facto hosts from Clinton County, Pa. A massive crowd is expected.

If you want me to be honest, the current (raging) controversy has only strengthened by resolve to cheer against these hundred dollar handshake-giving 11 and 12-year-olds. They play by different rules in La Grange, and I am under absolutely no obligation to support it. If you have a problem with that, maybe I'll drive out to your house and run over you in your living room at a moment when you're completely unprepared for a collision. Apparently that's totally street-legal in the OC.

And you know what else? I cheered for the Japanese team over the kids from Louisville in '02. The St. Matthews/Valley Sports rivalry runs that deep.

**I would have taken at least some pleasure in their defeat, though

Attend the first night FREE to see if officiating is for you!