Will Stein gets sunny at Fan Day

Share All sharing options for: Will Stein gets sunny at Fan Day

Pretty cool stuff from reader William Howard, who made the two-hour trek to Louisville for the football team's Fan Day on Sunday.

I'll let him tell the story:

I know how everyone likes the "Sunny Will Stein" pics, so when we approached him I just casually asked if he had heard about or read the blog (I think he knew where I was going), and he said that he does. Well, after that I went for it and said "can I get two thumbs up?" He laughed and sure enough gave me one thumb. He told me that he thought he only did one not two thumbs.

But anyway, he went on to tell me that when he scored this season he was throwing the thumbs to the sky. I think his words were, "I swear to God I'm going to do that on my first score." So be ready when he scores to get another shot of Sunny Will Stein.

And just like that I'm more excited about a potential Louisville touchdown against Murray State than I ever thought possible.

I'm also told that Shenard Holton, who was already a CC favorite, was crossing out Kentucky on all of the schedule posters that he was signing. A bold move that has my full support. 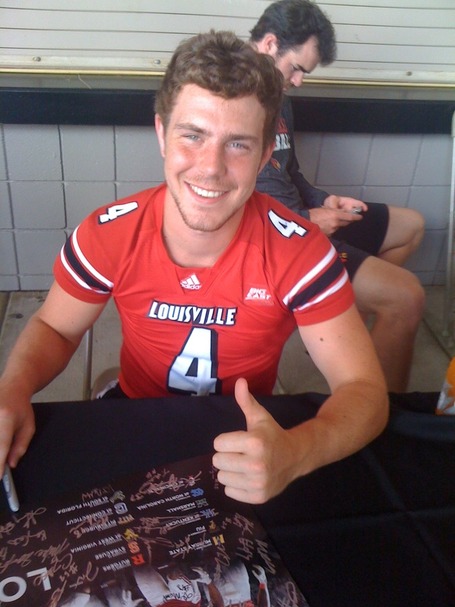