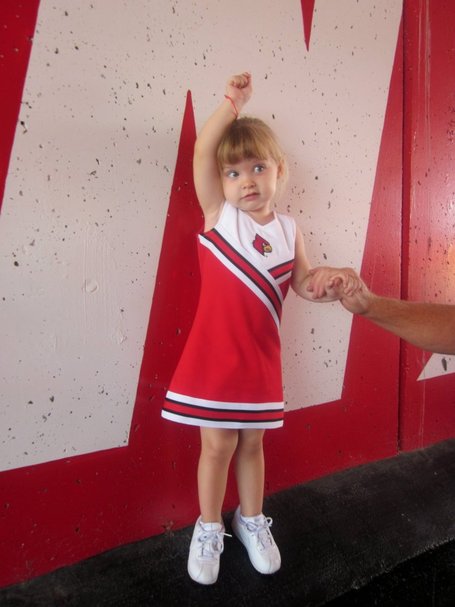 Certainly the demographic we're catering to.

It's Friday. It's gorgeous outside. Let's move quickly.

Edgar Sosa says he "loves playing for John Calipari," even if Louisville fans will get on blogs and call him a traitor.

Tyler Gabbert, who was a Louisville quarterback for approximately 40 hours earlier this summer, is apparently headed to Wyoming. Best of luck to him.

Michael Bush started at tailback for the Oakland Raiders last night and rushed for 16 yards on five carries.

David Akers proved again why he is one of the classiest players in the NFL by buying a billboard to thank the fans of Philadelphia for their support over the 12 years he spent with the organization. He also once got Art Carmody a scholarship...and took lamaze classes from my mom...she said he was incredibly nice.

Class of 2012 shooting guard Archie Goodwin trimmed his list of schools from ten to 8 today, and Louisville and Florida were the two schools to fall by the wayside.

C.L. Brown clarifies that Louisville asked Southern Miss to move next year's scheduled game back to 2013, and not the other way around. I'm also assuming the statement in his story this morning about Louisville looking for another 2012 opponent is incorrect, seeing as how the Cards already have four non-conference games and eight conference games scheduled with the addition of TCU.

Sports Illustrated's Big East preview is up, and the publication has Louisville going 5-7 (2-5) in 2011.

And finally, Rick Pitino will headline the final Cardinal Caravan stop next Thursday at Captain's Quarers at 6 p.m.