A Few Notes From Nassau.

Share All sharing options for: A Few Notes From Nassau. 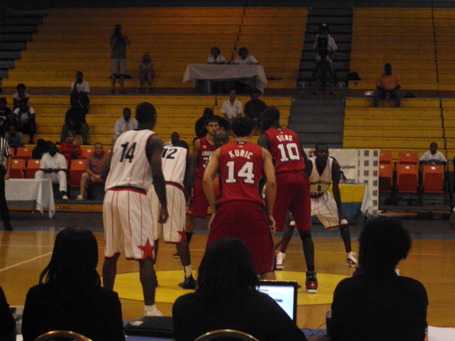 I've always said that Mike Rutherford does the best job with post-game updates of anyone. I am actually surprised Louisville has not hired him to review game tape. Although a lot has been said about last night's game, I figured I would share a few notes. At least it gives me an excuse to post some pictures.

I would be surprised if Elisha Justice knew his real name after playing for Rick Pitino. The coaches don't call him Elisha or Justice, he is simply known as Bullet. In an interview after the game, Pitino said that Justice was hurt and that would explain why he didn't play at all during the second half. However, I think Coach was trying to prove a point. When you play for Rick Pitino and pass on an open shot, you are likely going to be in the dog house. When Justice was yanked for good in the first half and came to the bench, Pitino, in so many words, told him "you were wide open, you will never play at this level unless you shoot the damn basketball." Justice did not play after that.

The Smith brothers then resumed point guard duties for the City's Team and Chris Smith was solid. The former Manhattan guard will never wow you, but he will always do what it takes to win. I don't think Chris will start, but may be one of the team's most valuable assets when the season begins. 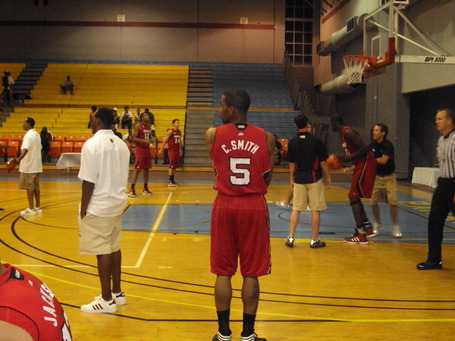 C.L. Brown told me that Chane Behanan shoots around 60% in practice. Although I may have anticipated a 10% drop from that number during the game, I would have never expected 1/7. It's no wonder Chane was hanging out at the charity strip soon after the red/white scrimmage was over. Chane shouldn't share all of the blame, as a  number of our guys struggled from the foul line. Lets hope they will improve before the opener.

Normally, this would be a great opportunity to boast about Marra's performance last night. Maybe if the Commonwealth's Team were actually Giants, I would have an argument. You still have to like Marra's effort, even though he was playing in a high school gym against an inferior team. I know Richard did. 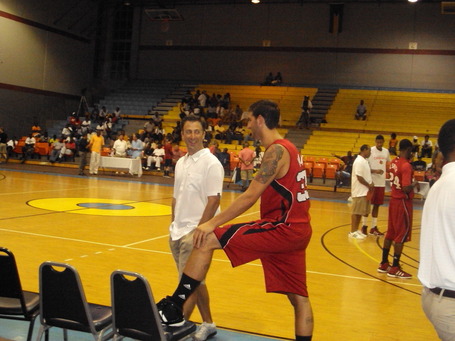 Angel Nunez has a shot that should be put in a renowned museum because it is simply a work of art. It's great Pitino has decided not to red shirt Angel because I think he could be a valuable asset this year and he will undoubtedly be a great player in the future. One thing I noticed about Angel is that he loves to talk trash. During one defensive possession, Angel screamed at his opponent and what came out of his mouth can only be described as the sound that is created when a shot-clock violation occurs. Although Pitino criticized the freshman for their lack of  fundamentals, I was impressed with Angel's potential on the defensive end. His wingspan will give him the opportunity to be a defensive menace should he choose to buy in.

I thought Gorgui looked great last night, but lets just say he won't be trying out for the Louisville swim team in the near future. Apparently a few fans were throwing football with him on the beach and when the ball was inadvertently passed into the water, Gorgui refused to go for a swim. We don't need you to swim big guy, just rebound the basketball.

T-Will was at the game and I took his picture. Not much else to report. 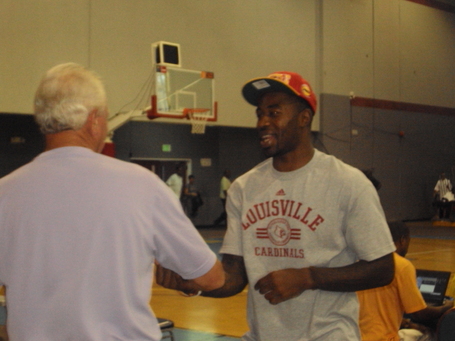 One more game, enjoy it.