Share All sharing options for: Louisville rolls to 115-54 victory in Bahamas opener

I don't think anyone who watched Thursday night's exhibition game will be shocked by the statement that the Commonwealth Giants - two-time defending champions of the New Providence Basketball Association - are worse than any team on Louisville's 2011-2012 schedule.

That being the case, it only makes sense that reading into what took place in the Bahamas on Thursday with any degree of depth would be a foolish act. And yet that's precisely what we're going to do. Because we're us. And you love it.

Thursday night left me even more convinced that Peyton Siva will be a first team All-Big East performer in his junior season. The one thing - aside from an unforeseeable injury - that worries me is the lack of a reliable backup. You simply can't run the show in the Big East night in, night out and not get worn down. Look at what happened to Kemba Walker last year. He went from front-runner for National Player of the Year to not even a unanimous all-conference selection because of a massive slump in late January and early-to-mid February. What saved Walker, and possibly won a national title for UConn, was Jim Calhoun moving Shabazz Napier to the point for long stretches of time in order to save his star's legs.

The good news is that Siva appears to be in the best shape of his life. He's put on some much-needed muscle, he hasn't lost a step in the quickness department, and his vertical appeared to be at least an inch or two higher last night than it was at any point last season. 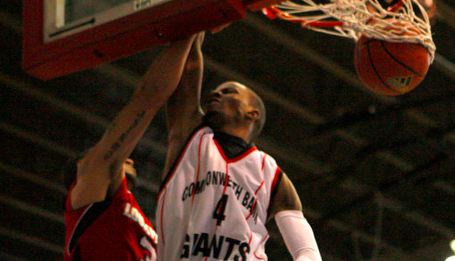 It's weird to think that a considerable portion of Peyton's success could be dependent on the development of Kevin Ware. Regardless of the validity of the previous statement, the potential for a special season is there.

Chane Behanan may have been the Cardinal to draw the largest amount of attention for his Bahamas performance thus far. While he may be the most physically-ready freshman Rick Pitino has ever had, I still see at least a couple of causes for concern.

1) Free-throws. He went 1-for-7 from the stripe a night after going 0-for-10. I don't care if you're shooting blind, left-handed, under-handed or trying to drop-kick the ball into the net, 1-for-17 is horrendous. This is a beast of a man who's going to be spending a considerable amount of time in the paint and thus will almost certainly be spending a considerable amount of time on the free-throw line. It's easy to cast this aside in August, but if Chane doesn't improve his stroke from ten feet significantly then this is going to become a big, big deal as far his team's success is concerned.

2) Lack of quickness. Behanan is terrific around the basket, has good hands and appears to be a capable enough passer, but his reaction time is a touch slow. He's certainly not without athleticism, but his lack of lateral quickness will hurt on defense, and his poor reaction time could make him miss two or three rebounds a night.

I loved Pitino's comparison of Behanan to Ryan Gomes. If his jump shot improves and he's able to speed his game up a touch, he could absolutely become that type of player.

I'm not trying to be overly critical of Chane - I believe he's poised to have a tremendous freshman season - I just think it would be unwise to anoint him as the second coming of Rodney McCray before his first collegiate season has even started.

Zach Price is further along than I expected, but he's still got a long way to go. He showed some nice touch around the basket a couple of times, had one very impressive block, and played with a great deal of effort. He also got pushed around a little bit by some much smaller defenders, and looked entirely incapable of doing anything with his right-hand on offense.

There's been no recent talk of moving him there, but I still can't see Stephan Van Treese not being our backup center during Big East play.

A really impressive offensive game from Gorgui Dieng, who showcased a gorgeous new jump hook as well as the equally attractive Gorgui turnaround that we've all come to know and love. His bugaboo was again rebounding on the defensive end, something I'm sure he'll hear about from Coach Pitino no less than 500 times over the next six months.

All-in-all Gorgui looks great, which is a big deal because when it comes to the issue of most important player on the team, it's without a doubt a two-horse race between him and Siva.

As far as the T-Will stuff is concerned, yeah I thought it was a bit unnerving, but that's kind of been post-Louisville T-Will. And if we're really being honest with ourselves, it was pretty much Louisville T-Will too.

People forget how divisive a figure Williams was for the majority of his career. T-Will was ripped far more than he was defended over the course of his first three seasons as a Cardinal. And when U of L took awful non-conference losses to Western, Minnesota and UNLV during his senior year, do you remember who received the brunt of the blame? Louisville was never anywhere near "in love" with T-Will until his last team went on that incredible run in Big East play. All of the sudden the "T-Willisms" that had left critics responding with quips about how he needed to spend less time joking and more time not shooting threes were met with unfiltered laughter.

If Louisville had won a national title in 2009, do you know how many people would have a problem with him saying that team would beat this Cardinal team by "30 or 40?" My guess is it would be about the same number who are going to lay money on the Real Deal Shockers at some point between now and 7:30.

Of course the statement was ridiculous. The '09 team was great, but there were only two teams in the league (DePaul and South Florida) that they ever blew-out. And you can't gloss over the fact that they were absolutely manhandled by a Connecticut team that looked vastly superior in their only meeting and then embarrassed by a 33-point loss to an NIT-bound Notre Dame squad. Before the Big East tournament started it was a long-shot for Louisville to be a No. 1 seed, and then everything fell into place perfectly and the Cards wound up as the No. 1 overall seed. It was a remarkable achievement, but perhaps slightly misleading. With its draw, I don't think it's a misstatement to say that team should have made the Final Four, but I also don't think not doing so was the impossible-to-fathom underachievement that some people have since made it out to be.

The other statement that has people talking is T-Will taking the blame for the Michigan State loss, but then saying that the clash he had with Rick Pitino - which left him sulking on the bench during the early part of the second half - had a major effect on his play.

"Whatever the words between me and the coach, me and the players, me and Tom Jurich, I don’t really remember what was said. . . . We should have won the whole thing. It haunts me to this day."

Williams may very well be the best player of the Pitino era, and the trips to the regional final in '08 and '09 almost certainly don't occur without his contributions, but "Louisville First" is not a slogan that could have been flown with complete honesty during his tenure.

There is only one man superior to Northeast Mike Marra, and it is Bahamas Mike Marra.

Playing for the first time in front of MarraFan427, Mike buried 5-of-8 treys and wound up tied for the team-lead in points with 16. The most encouraging part of his performance, I thought, was that his three misses were all short, but on line. There wasn't that one (or five) miss(es) four feet to the right or off the side of the backboard. Good shooters don't miss as badly as Marra has missed at times over the past two years. Five makes and three good misses is an encouraging development.

Drew Deener was conveniently engaged in a conversation with Marvin Menzies when Elisha Justice checked into the game for the first time. We all noticed, Drew. You won't be able to hide once Billy Minardi Classic time rolls around.

Who was your favorite Giant? The guy with red shorts, the one with no number, the 44-year-old who missed the game because of work, or the player who works as a bellman at the hotel where the team is staying?

Enjoying(?) the new Russ Smith, but he has to know at this point that Pitino is going to be on him the entire year. It's not hard to tell (I guess unless your Russ) that Pitino didn't actually want to move him to the two guard, so it's not surprising to see the younger Smith getting ripped every time he makes the slightest mistake.

Still, I didn't know he had that dunk in him.

Did anyone else notice that the back of Pitino's head looked weird. It was like he either got a really bad hair-cut or had some extreme bedhead. Very un-Piitno.

The Commonwealth Giants' jerseys bear a strong resemblance to those of the early '90s Houston Rockets. At least on television.

Solid job on the broadcast by WHAS. I understand there were a lot of people worried that this was not going to to go smoothly, but there were no issues with the picture or being able to see any of the action clearly.

Several good shots of CC correspondent Matt Swafford, including one of him taking a picture (presumably for this web site) right at the opening tip. What a strange, strange world we live in.

Interesting to see CS5 getting some significant time at the point, especially since Rick said flatly that Smith "cannot play the point" just a couple of weeks ago. He handled the duty pretty well. Reminds me a little bit of the extremely brief Jerry Smith era at the one.

What if the Real Deal Shockers came out tonight and were just f---ing awesome?

They're up by 25 in the second half and no one can figure out how they couldn't beat the Giants. Maybe that 44-year-old who couldn't get off of work is just that good.

Whenever a player is going in for an uncontested dunk I'm now finding myself saying "don't get hurt" instead of "do something cool." I'm getting old.

It appears all the preseason reports on Angel Nunez have been accurate. Lean frame, good shooter, vast potential.

I'm torn on whether or not he should be redshirted. On one hand, he's certainly good enough to contribute (at least minimally) right away at this level. On the other, there are just so many bodies on the roster right now, and it's easy to see how giving him a year to develop and then four years of solid court time could be the best play.

As far as the comparisons to Garcia are concerned, he actually looks to be much stronger than Francisco was as a freshman (or junior), but obviously his tools aren't where the future first round draft pick's were. That said, I can see why the coaching staff is excited about him.

A couple of notes from U of L:

--U of L has canceled the planned intrasquad scrimmage on Saturday, and will instead just hold a normal practice. I can only hope that Paul Rogers will still be doing play-by-play on the radio.

Nine-hundred and sixty-eight comments on an open thread for an August exhibition game the Cards won by more than 60. We're all f---ing insane.

I'll see you all tonight.