Louisville Does Red/White in the Bahamas

Share All sharing options for: Louisville Does Red/White in the Bahamas 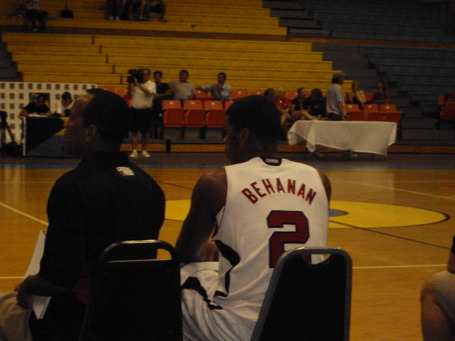 To judge a basketball team on an inter-squad scrimmage is just flat out absurd. However, I don't really care and I am going to anyway. On to same game notes:

A. The White Team: Coached by Rick Pitino and Kevin Keatts 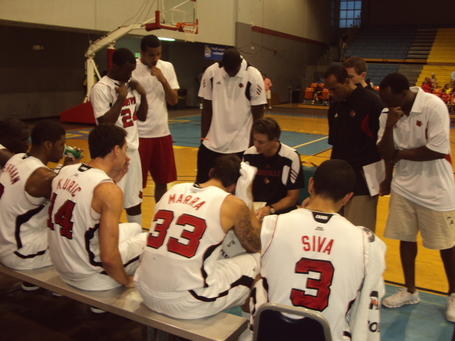 B. The Red Team: Coached by Richard Pitino and Wyking Jones 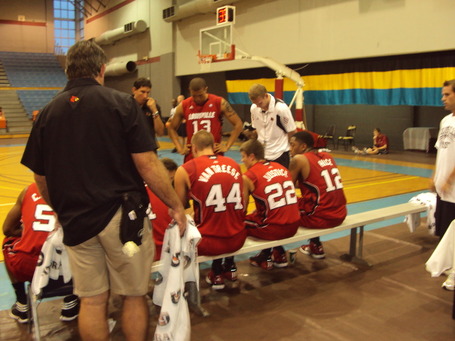 2. Rick Pitino is the Best Teacher in the Game.

I'm biased, but it doesn't matter. Jay Bilas has always talked about how impressive it is to watch Louisville's coach run a practice. Pitino was at his best when the players participated in a number of drills before the start of the scrimmage. During most games, it often looks like CRP is ready to to take many of his players' heads off when they screw up. For some reason, memories of Edgar Sosa come to mind.  Yet, Pitino showed quite the opposite style of coaching while running practice and coaching the White Squad to a huge victory. Each player would get individual instruction when they did something wrong, and Pitino's use of encouragement was plentiful. The man is nothing but an educator. I'm still fascinated. 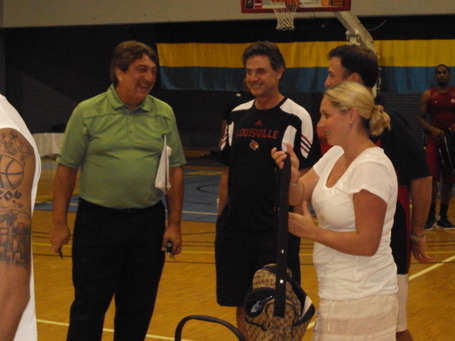 A. Passing.
The White Team did a great job moving the ball and finding the open man. Most remember how great of a passing team last year's edition of Louisville Basketball turned out to be. This team seems to be picking up right where they left off.
B. Getting out on the break and team defense.

Both teams played vintage Pitino ball. The game was a track meet the entire time, with each team trying to score its points on the break by generating turnovers on the defensive end. It was impressive how both squads seemed to focus on defense, especially in the way they communicated with one another. With the added length of Blackshear and Ware, this Louisville squad might be scary good on the defensive end.

Enough said. Some nights you have it and others you don't. Although I never had a box score in front of me, I didn't feel the team shot very well.

D. The Red Team Could Not Score the Basketball.

The Red lacked a great deal in experience and it showed. They often failed to create any points off ball movement and did not have a player on the team that could create off the bounce. Last year, Pitino often said that the second team would beat the first. The bench has some improving to do if it wants to compete with its starting counterparts.

4. Chane Behanan Will Be Special.

Contrary to previous reports, Mr. Behanan came out wearing #2 tonight and although Ellis Myles wasn't in the building, he would be proud of the fact that Chane is wearing his old number. Behanan was a presence on the glass, great in transition, and showed much skill when handling the ball on the perimeter. When he got the ball with great position inside, it was game over. Chane was clearly the most dominant player on the floor tonight and he still wasn't satisfied. After the game, he stayed back to work on his free throws. Keep working Chane. 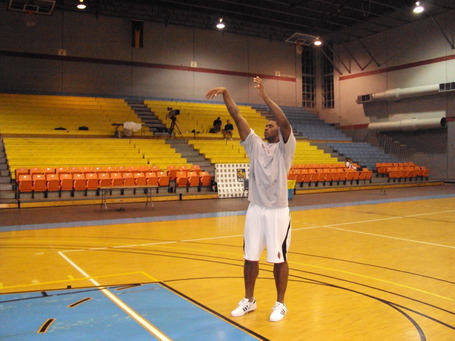 4. All of the Summer Reports About Russ Smith are Accurate.

Although Russ did run the point during parts of the game tonight, he was primarily playing on the wing and was in attack mode the entire time. Besides Behanan, there was no one on the floor that impressed me more than Russ Smith. He got out on the break and put up a great floater in the lane. He also made a few great passes. Where he will fit into the lineup is a mystery, but Russ can flat out score the basketball.

5. Kyle Kuric Continues to be a Human Highlight.

I really wish the people that run the Dunk of the Year contest were in the gym tonight because Kyle would have easily won the title for a second year in a row, this time without the technical. The highlight of the night came when Big Mike Marra threw Kyle a lob pass on the break. Kyle thought he would go above and beyond the call of duty and rather than just catching it and slamming it home, he decided to go above the rim and tomahawk the ball into the basket. I personally think it was better than the dunk heard round the world in South Bend, but maybe that's because I was only a few feet away. Lt. Colonel Doug Marshalll, a proud Louisville graduate and a huge Kuric fan, wanted me to get a picture with the King. Uncle, get it framed. 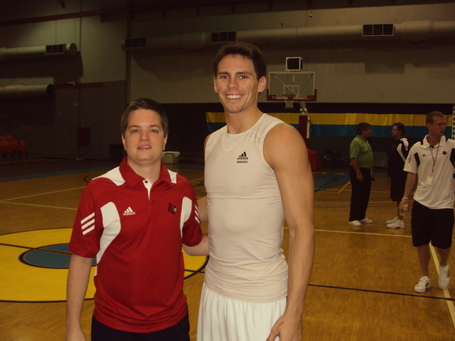 I have some video of practice I will review tomorrow and see if its worth posting. Other than that, everyone have a great night.