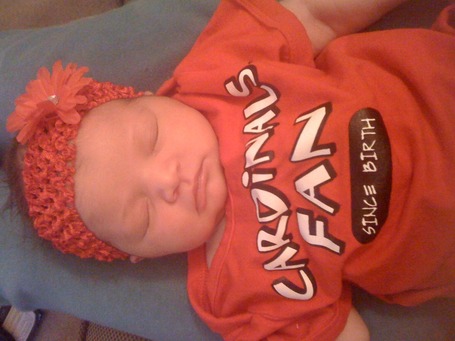 OK, I'm not entirely sure how this happened, but we are now backlogged with baby Cardinal pics. If you want your child to be featured on Card Chronicle you better go ahead and submit your picture now (like Keith Wynne did) because it's becoming the Louisville equivalent of getting a tee time at Augusta National.

Kids have always been drawn to me. That just made this a lot creepier. Really wish my delete button wasn't broken.

There's still more from media day to talk about and there's Louisville Cardinal basketball happening in under three hours, so this will be relatively brief.

A lot of people have been emailing about whether or not there will be streaming available for the televised games in the Bahamas. The short answer is maybe. The longer answer is if there is, I will absolutely let you all know and point you in the right direction before the game tips tomorrow night.

What I do know is that the Cards will be partaking in an intrasquad scrimmage this evening at 7:30. There is no television or radio for the evening's festivities, but our man Matt Swafford will be in the house and potentially sober enough to let everyone know what went down.

Today was the first day in full pads for the football team, and here's the quick report from U of L.

- Practicing for 2 hours, 30 minutes in full pads, the Cardinals did a lot of situational work in the red zone during their full team drills.

- The Cardinals are using a number of underclassmen in their first couple of groups.

- The team worked a lot on 1-on-1 tackling drills in the open field with the linebackers going against running backs and the secondary working against the wide receivers.

- Senior wide receiver Josh Bellamy is having a good camp and looks to be a featured receiver for the Cardinals entering the season.

- The defense put a lot of pressure on the quarterback during Tuesday's team drills.

- Freshman quarterback Teddy Bridgewater returned to practice on Tuesday and did some throwing during the session.

So who's taking the majority of credit for the dramatic boost? You guessed it, Marquis Teague.

Andre Drummond, anointed as the No. 2 player in the class of 2012 by ESPN earlier today, broke his extended silence today and announced that he would not be heading to college this fall and will - as planned - head to prep school for another year. Perhaps more importantly for Louisville fans, he named a final five of U of L, Kentucky, Connecticut, West Virginia and Georgetown.

As Jeff Goodman points out, it will possible for Drummond to skip college entirely and head to the NBA after next season.

A must-read from Beach Gorgui-hater Jeff Goodman, who looks at where the McDonald's All-Americans from the vaunted class of 2002 are now. Recruiting rankings are silly.

Former Cardinal offensive lineman Mark Wetterer was released by the Cincinnati Bengals and picked up by the New England Patriots in less than 24 hours.

Byron Stingily is receiving the rookie treatment in Nashville. 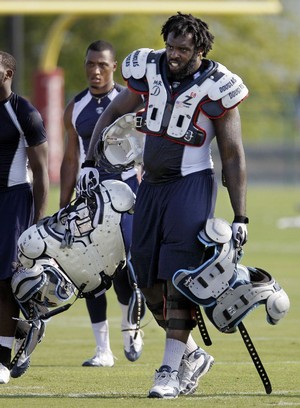 Also of note is that Stingily is currently listed as a starter on the Titans offensive line. If you have a time machine with the potential to go back and locate November, 2010 Mike Rutherford, well, let's just there's a money-making opportunity there.

Villanova began its preseason European tour with a 69-64 loss to Senegal.

And finally, Andrea Adelson says Hakeem Smith is the 14th best player in the Big East.