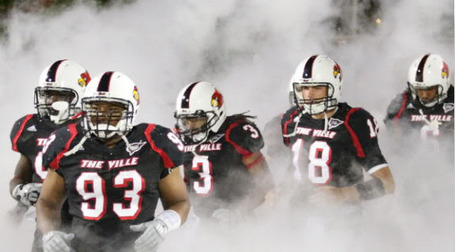 One month from today.

Cory McCartney of Sports Illustrated talks to Victor Anderson and wonders whether or not the former Big East Rookie of the Year can finally regain his freshman form.

Some new faces could make a splash. South Florida welcomes Darrell Scott, the Colorado transfer and former No. 2 overall recruit in the class of 2008, and Dontae Aycock, the Auburn transfer and former four-star prospect, while Rutgers adds Savon Huggins, a heralded in-state recruit who rushed for 1,891 yards and 35 touchdowns at St. Peter's Prep (Jersey City).

But it's difficult to find a more intriguing candidate than Anderson, a proven commodity, albeit one surrounded by questions.

Can he stay healthy? Can he return to his freshman form? The answers will come. For now, Anderson isn't letting the uncertainty cloud his preparation.

Earl Clark has organized a charity basketball game which will take place this Friday night at 7 p.m. at Bullitt East High School. Tickets are $7 and there will be an after party at The Mixx Factory for 15 bucks.

Here's the roster for the game: 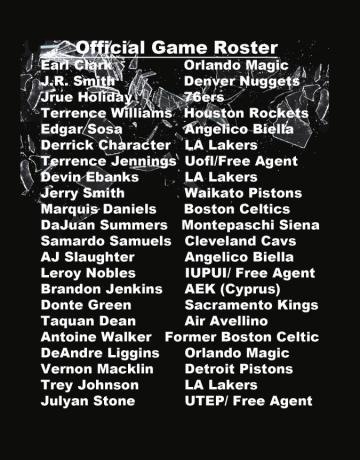 Yahoo's Jason King updates his preseason hoops top 25 and has Louisville at No. 9.

9.Louisville – The Cardinals surprised some folks by finishing in a tie for third in the Big East standings last season, but nothing they do this season will come as a shock. Kyle Kuric is back, but the real keys to the team will be freshman guard Wayne Blackshear and big man Chane Behanan. Look for Rick Pitino’s squad to contend for the title in the nation’s toughest league.

Eric Crawford says quarterback shouldn't be a worry for either Louisville or Kentucky heading into this season. Somehow I'm still worried.

Ch-Daddy sits down for a quick Q & A with ESPN's Andrea Adelson.

AA: How did you feel when they first told you they wanted you to make the move to tight end full time?

JC: I’m all for it. There was no negative reaction. I wanted to help my team in any way shape or form, if that gets the job done I'm all for it. At first, it was tough because I couldn’t stay low enough to save my life and it showed. Those defensive linemen are low and they stay low. My first reaction was to stand up and it wasn't working out to well. I’ve gotten the hang of it.

Jerry Smith is spending part of his summer playing for the Gruber Law Office team in Milwaukee Pro-Am League. He talks about it (or tries to talk about it over the background music) in this video.

Mr. Arthur Carmody has finally joined Twitter. If you're in the tweet game, you can find him under the creatively titled handle of @ArtCarmody.

If you didn't check out the comments under the latest Bender post, here was Leigh's contribution:

Though it was reported last week that Louisville pitcher Justin Amlung had signed a contract with the Cincinnati Reds, that no longer appears to be the case. Amlung is now reportedly mulling over whether or not to return to U of L for his redshirt junior season. He was drafted by the Reds in the 39th round of the 2011 draft.

And finally, on the same day he was released by the Houston Texans, Amobi Okoye signed a one-year deal with the Chicago Bears.