According to multiple sources at the Adidas Invitational in Indianapolis, class of 2012 point guard Gabe York has narrowed his list of schools down to four, and that group no longer includes Louisville. After taking his visits, the California floor general is now considering only Marquette, Notre Dame, Washington, and Arizona.

York says he wants to commit in August, which is like three years away in the world of recruiting, but this news still figures to send the Louisville staff in another direction when it comes to its search for a '12 point guard. Expect Pitino and company to really turn up the heat on J-Mychal Reese and Kris Dunn in the coming weeks. 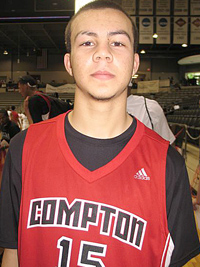 It has become clear that the U of L staff, which is looking to sign "one or two" players from the class of 2012, has made Oak Hill shooting guard D'Vauntes Smith-Rivera its top priority. Though point guard and center appear to be Louisville's biggest needs at the moment, snatching one of the classes elite scorers would seem to trump going after individuals by position. If U of L misses out on DSR, then they are also currently in tight with T.J. Warren, Gary Harris, Alex Poythress, and Danuel House, any of whom could fill the "elite scorer" void.

After that it appears Pitino and company are looking to the point guard position, where Reese, Dunn, and Cincinnati's Semaj Christon have been the names consistently popping up.

Taking a center would likely mean taking at least three players from the class and creating yet another scholarship issue, but we've seen these things work out before. Joel James and Mitch McGary both seem to be realistic options for Louisville at the five, and either one would be hard to pass up if the opportunity presented itself.

Whenever you get the urge to feel angry when a player cuts Louisville over the next couple of weeks, just remember that we're one step closer to bringing Chicken to the Bucket.