Share All sharing options for: Elite 2013 QB puts Louisville in his top four

Jeremy Johnson figures to be one of the most sought-after players in the class of 2013, but seeing as how the 6'5 quarterback plays his high school ball in Montgomery, Ala., most figured the battle to land his services would be a two-horse race between Auburn and Alabama.

That may not be the case.

Johnson spoke with Sports Xpress this morning, and told the publication that his current top four is Auburn, Oklahoma, Florida State, and Louisville. He later stated that the Tiger staff is the one that has stood out to him at this point. 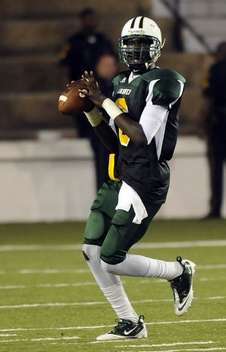 Obviously it's a huge boost for the Cardinal program to have this kid state that U of L is one of his favorites, but "it's a big deal just to be mentioned," is the same thing we said when Teddy Bridgewater's name first popped up as a potential commitment. Logic says that Louisville is a long-shot to land a kid like Jeremy Johnson, but Charlie Strong and Clint Hurtt have already made some miracles happen.