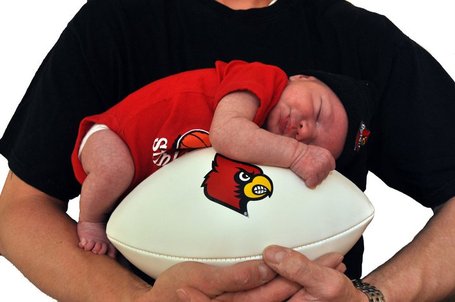 My sincerest apologies for the lack of activity on the site over the past couple of days. I was dealing with some serious comp issues, then some even more seriouser car issues, then my daughter was kidnapped by some Albanian rebels in France and I had to use the special skills I learned as a government agent to get her back...it was this whole...crazy thing.

ESPN's Blue Ribbon preview for Louisville is out, but sadly it's an insider-only read. Thankfully, using the special skills I learned as a government agent, I'm able to bring you a snippet of the analysis.

Many a second-year coach has been waylaid by the expectations that come from a strong debut fueled by a group of motivated seniors who then depart and leave a vacuum. It's hard to believe Strong will succumb to that, although the Cardinals certainly have enough questions to make one wonder whether a repeat of last year's above-.500 record and bowl appearance are possible.

The offense needs stability at the quarterback position. Although Stein has the intangibles, Brown and Bridgewater have the talent, and it will be surprising if one of them isn't starting before long. If the Cardinals are going to rebuild, they might as well do it with a signal caller who will be playing down the road a few years.

Whoever is under center will benefit from some potential at running back, thanks to Anderson and Wright, and depth at receiver, if not proven playmakers. The big question is whether the inexperienced line will be able to protect and/or open holes for any of the skill players.

The defense was stout last year and has the potential to be pretty solid in 2011, provided the cornerback situation is solved. The Cardinal safeties are top-notch, or teams would pass 50 times a game against them. The front seven has talent, but it is young and will need time to come together.

Strong authored a good start to his tenure. Now, he must begin the hard business of building continuity and making progress. There is talent on this team, but its youth and inability to lead right now could make for some rough spots throughout the year. Louisville is headed in the right direction under Strong, even if this year's record might not reinforce that statement.

Chicken Knowles made a splash on the national scene over the weekend when he made the highest debut of any player in the country in the new Rivals' top 150, jumping into the rankings for the first time at No. 58.

That's the good, so there has to be a bad.

Knowles gave an interview to Kenneth True earlier today where he disclosed his current list of schools.

Chicken Knowles would say "Baylor and Houston are recruiting me the hardest." Knowles is currently in Akron (OH) attending the LeBron James Skills Academy.

If you're looking for some guys to group with Knowles he says "I wouldn't mind playing with Isaiah Austin, and Danuel House." In order for that to happen Knowles would have to head to Baylor.

It should be noted that Louisville is also recruiting Danuel House pretty intensely.

Overhearing a Chicken Knowles conversation between three random guys at the bar on Saturday ranks somewhere in between scoring a touchdown for the first time and losing my virginity on the Mike Rutherford totem pole of lifetime achievements. It was a really cool touchdown. 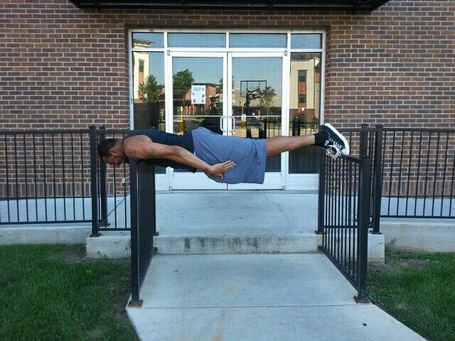 Speaking of Chi-Daddy, he has been named to the John Mackey Award preseason watch list. The Mackey Award is given away each year to the nation's top tight end.

Larry Vaught takes a closer look at the relationship between Charlie Strong and Joker Phillips.

Strong doesn’t mind the constant comparisons to Phillips since they are both African-American coaches starting their head coaching careers.

"You are always going to be compared to somebody wherever you are. If I was at Florida and he was at Florida State, the same thing would be going on because you have two in-state schools. Wherever you are, the comparisons will be there," Strong said. "If you are being talked about, you must be doing something good."

Louisville finished the 2011-2012 athletic year in 34th place in the final Director's Cup standings, two spots ahead of in-state rival Kentucky. Eric Crawford has more on that here.

Things are looking increasingly dim on the Gerrod Holliman front, as the former Army All-American responded to a question on Facebook about when he would be in Louisville with, "January." All signs certainly appear to be pointing toward Holliman not being eligible for the upcoming season. Here's hoping he still winds up donning the red and black at some point.

And finally, the Big East Coast Bias is going to be hosting an online dynasty for the soon-to-be-released NCAA Football 2012 game. If you're interested in reserving a spot, do so here.