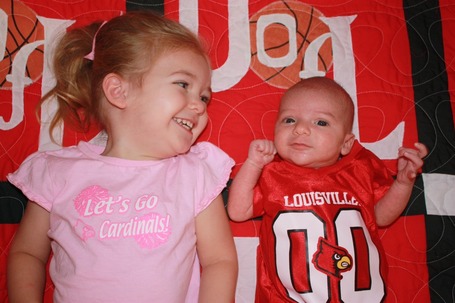 ESPN takes a summer look at Louisville basketball and scoffs at the fact that some thought the program was in so much trouble this time last year.

A year later, those concerns seem ridiculous. The 2011 Cardinals thrived. Pitino's decision to pick up the pace -- and his brilliant construction of a lineup that executed that could execute his classic pressing style effectively -- led to a 25-10 season and one of Pitino's finest seasons as a coach. Meanwhile, the recruiting picked up: Pitino landed commitments from Chane Behanan, Wayne Blackshear, Zac Price and Kevin Ware, all four of whom are ranked in 2011 ESPNU top 100. Guard Peyton Siva enjoyed a breakout year at the point guard spot, and is a likely preseason candidate for Big East player of the year.

Basketball Prospectus has wrapped up its countdown of the top 100 players in college basketball, and Chane Behanan (#81) was the only Cardinal to crack the countdown. If that wasn't bad enough, take a look at their predicted All-Big East teams:

If Peyton Siva doesn't make any All-Big East team OR if Gilvydas Biruta actually ends up as a member of the league's second team, I will eat both of the author's shoes. That's a promise.

Louisville is the first major program to offer a scholarship to 6-11 center Landry Nnoko, a native of Cameroon. You've gotta love this quote:

"It’s all been fun for me," Nnoko said. "I don’t know a lot about college basketball, so I have taught myself (about programs) with the iInternet and google.

Canadian Tyler Ennis is the latest class of 2013 point guard being targeted by the U of L staff.

ESPN takes a look at the controversy surrounding who invented the high-five.

At a University of Louisville basketball practice during the 1978-79 season, forward Wiley Brown went to give a plain old low five to his teammate Derek Smith. Out of nowhere, Smith looked Brown in the eye and said, "No. Up high."

The Cardinals were known as the Doctors of Dunk. They played above the rim. So when Smith raised his hand, it clicked for Brown: He understood how the low five went against the essential, vertical character of their team. "I thought, yeah, why are we staying down low? We jump so high," says Brown, now head coach at Indiana University Southeast. Brown insists it's Smith who invented the high five and Smith who spread it around the country.

In fact, high fives turn up in highlight reels of the 1978-79 Louisville team. Occasionally, they're jerky, thrusting fives -- more like spears thrown perpendicularly at the other guy's torso -- but they're clearly among the first high fives ever broadcast into American living rooms. Midway through the second half of the 1980 NCAA Final against UCLA, Brown posted up against Kiki Vandeweghe and overpowered him, banking in a shot and drawing the foul. In footage of the game, Brown immediately rams his left arm up to slap Smith five. (Brown always made a point of high-fiving with his left hand because as a kid he had his right thumb amputated and it somehow didn't feel right to high-five with four fingers.) The announcer, Al McGuire, shouts: "Mr. Brown came to play! And they're giving him the high-five handshake. High five!"

And finally, North Carolina has named former Louisville assistant Everett Withers as its interim head football coach. The Cardinals will face the Tar Heels in Chapel Hill on Oct. 8.