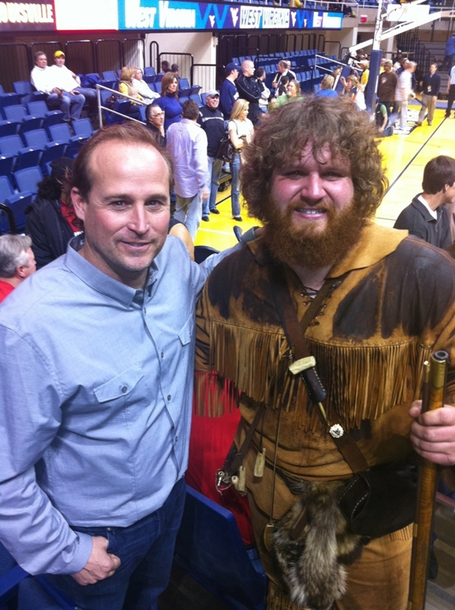 I fear West Virginia's new coach is so perfect for the program that the Mountaineers might never lose again.

In a move made inexplicably close to the start of the 2011 season, North Carolina fired head football coach Butch Davis yesterday. It's definitely a right move at the wrong time situation, but it likely improves Louisville's chances of winning at Chapel Hill in October, so...awesome.

DeJuan Wheat has launched a new personal web site. Either he's had some help with the site or he's modeling his retirement life after Ricky Henderson.

DeJuan has many projects planned with the city of Louisville in mind now that he is well into his first year of retirement from a successful basketball career. Some of the projects planned for his foundation will include cancer walks, visiting schools, forming workshops for underprivileged kids, food and toy giveaways during the holidays, and of course a countless number of sporting events. DeJuan encourages kids to log on, send messages, and ask questions about basketball or whatever is on their minds. He will post different questions and topics and would like people of all ages to interact.

Unquestionably one of the ten greatest Louisville basketball players of all-time. Right, guys?

Class of 2013 point guard Jaylen Brantley has been on fire in recent weeks for his BABC AAU team, and currently lists Louisville and Syracuse (he has offers from each) as his favorites. Brantley is only 5-10, 150 lbs (everybody freak out!), but he's a tremendous ball-handler and one of the top shooters in the country. Not bad from mid-court, either.

The best take I've seen thus far on why big-time college athletes should not be paid.

Ask yourself this: Why do we care about college football? We know that the skill level in college football is vastly inferior to the skill level of NFL teams. Heck, many Heisman Trophy winners are not even NFL prospects. Yet, by the millions, we watch. We cheer. We buy. We rejoice. We gripe. We wear. We eat. We live it. Many of us even argue that we PREFER the quality and style of college to pro, we LIKE watching those games more. But is it the quality and style we prefer, or is it passion, youth, exuberance and that we feel closer to the game?

No, college athletics is not ABOUT the players. College athletics is FOR the players, but that’s a different thing, and that’s a distinction that we don’t often make. College football only works on this grand scale, I believe, because it’s about the colleges. The alumni connect to it. The people in the town connect to it. The people in the state connect to it. People are proud of their connection to the University of South Carolina and Clemson, they are inspired by Alabama and Auburn, Penn State and Notre Dame and Stanford, they identify themselves through Missouri and Wisconsin and Florida and Texas A&M. The players matter because they chose those schools, they play for those schools, they win for those schools and they lose for those schools, too. Everyone, of course, wants them to be the best players available, and some are willing to cheat the current system to get those players. But soon the players move on, and the love affair continues, just as strong, just as vital. The CONNECTION is what drives college football.

Otherwise, without that connection, it’s just football that isn’t nearly as well-played as the NFL.

One name I'm surprised to see hasn't signed a free agent deal yet: Rodney Gnat. You could have made the case for Big Pretty to be the defensive MVP last season.

With the exception of the one guy everyone knew would leave (Kemba Walker) and the one guy no one thought should leave (Terrence Jennings), the top non-seniors returned to school.

This isn’t a league top heavy with lottery picks -- Basketball Prospectus recently ranked just two Big East players in its top 100, Pitt’s Ashton Gibbs (No. 16) and UConn’s Jeremy Lamb (No. 17). But there is a wealth of experience, of guys who know how to circumnavigate the conference’s brutality -- Syracuse’s Scoop Jardine and Kris Joseph; Gibbs and Nasir Robinson at Pitt; Darius Johnson-Odom at Marquette; Cincinnati’s Yancy Gates and Cashmere Wright; Jared Swopshire and Peyton Siva at Louisville, Alex Oriakhi at Connecticut and Villanova’s Maalik Wayns.

The Hartford Courant is running though all of UConn's 2011 opponents, and take a look at Louisville here.

And finally, another look at how members of the U of L baseball team are faring in their respective summer leagues.