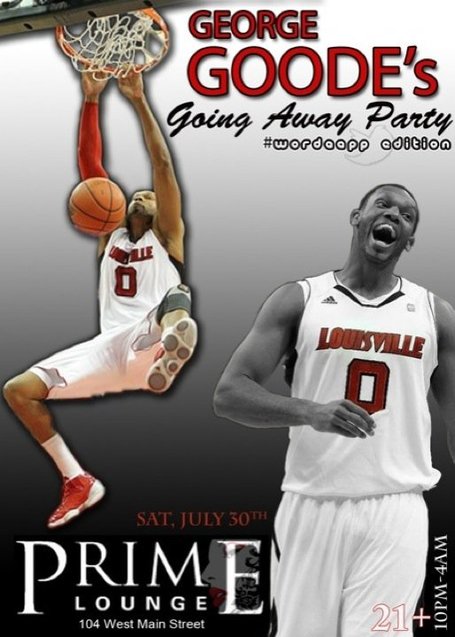 Saturday plans have been decided.

In case you missed, here's where Louisville's undrafted free agents wound up earlier this week:

Add this total to the three Cardinals who heard their names called on draft day, and eight of Louisville's 25 graduating seniors are current NFL players. Greatest week in U of L football history. Bar none.

The big story yesterday (at least here) was Chicken Knowles's national television debut last night on ESPNU. Ultimately, the first half was dominated by the Georgia Stars' Alex Poythress and the second by Knowles's teammate, Danuel "Back of the" House, as Texas Pro prevailed in overtime. Thanks to the wisdom of an AAU coach who drew up an out-of-bounds lob play from near midcourt with ten seconds left in a tie game, Knowles sat for the last half of the 4th quarter and all of the overtime period, but still finished the night with 15 points.

As far as the other U of L targets, Poythress has a Big East-ready body and the game to go along with it. He still lists Louisville, but the Rick Pitino and company seem to be an also-ran in his recruitment. The Cards appear to be in better standing with House, who said after the game that Louisville has been on him hard and that he will likely end up making a visit to campus.

The other player of interest was Georgia Stars guard Marcus Hunt, whom Louisville offered a scholarship earlier this month. Hunt didn't do anything to make your jaw drop, but he did hit a couple of shots and displayed the athleticism and effort (he hit the floor at least five or six times) that has accounted for his meteoric rise this summer.

As for the Chicken, Knowles told Jody Demling (the enemy) after the game that he had spoken with a Louisville coach, "but not recently." He added that Baylor and Missouri (FFFFUUUULLLLLEEEERRRRR) are the two schools that have been recruiting him the hardest.

You may remember that Chicken told us a few weeks ago that he was hoping to make a college decision by the end of July. My guess is that plan may have changed given the amount of recent attention he's received. There's still a lot of fighting left to be done.

Demling (the enemy) told me last night that once he was done interviewing Chicken, Knowles walked away, then came back and asked Jody if he was the one who started "Bring Chicken to the Bucket." Knowles apparently didn't understand the "Bucket" part of the equation, and thought it might be something bad. Demling set him straight, or so he claims.

T.J. Warren has narrowed his list of college choices to eight, and Louisville is still in the game. Warren, who had cut Kentucky last month, now unsurprisingly re-lists the Cats after receiving a scholarship offer from John Calipari a couple of weeks ago. The other schools he's picking between are: NC State, Texas, Georgetown, North Carolina, Kansas and Florida.

We haven't mentioned it here yet, but Louisville offered 2012 forward Jake Layman a scholarship on Monday. Layman is another late-riser who didn't have much of a reputation heading into this summer. He also holds offers from Wake Forest, Florida, Notre Dame and Syracuse, among others.

Rivals has updated its current team recruiting rankings for the class of 2012, and Louisville now sits at No. 35. For the record, the four teams immediately behind U of L are Oregon, Tennessee, Mississippi and Virginia Tech. Future member TCU (20), South Florida (26) and Rutgers (28) are the Big East schools ranked in front of the Cardinals.

Greg Scruggs has a message for you:

Word is just now circulating that Gunner Kiel, widely-regarded as the top quarterback in the class of 2012, has picked Indiana over Alabama and Oklahoma. Mike Davis must have made quite the impression on the Indiana native when he was a kid.

Seneca lineman Tyrone Pearson, who said a month ago that he was committed to Central Florida and was planning on getting a UCF tattoo, is now saying (tweeting) that he will decide between Louisville and Kentucky on Monday. He has committed to and decommitted from Louisville twice in the past six months. Kathy Griffin thinks the kid's desperate for attention.

Congratulations to Juan Diego Tello Palacios, who will be making a return to Spain's top league this season.

For the out-of-towners, here's what U of L's pregame football video looked like last year:

And finally, congrats to (now) former Louisville ace Justin Amlung, who inked a deal with the Cincinnati Reds yesterday. He had been slated to pitch in the Cape Cod League All-Star game before the Redlegs came calling.