In its first year of existence, the KFC Yum Center (you forgot the exclamation point, bro) is already being honored as one of the world's top arenas.

Pollstar, a trade publication covering the worldwide concert industry, tabbed the Yum Center as the 24th-best arena in the world and 10th best in the United States in its 2011 mid-year rankings.

"We are very pleased and proud of our ranking," said Harold Workman, president and CEO of the Kentucky State Fair Board, which manages the facility. "This clearly demonstrates why artists are eager to perform in the KFC Yum! Center. It is also a very positive nod to our partnership with AEG Facilities and to the hard work of our staff." 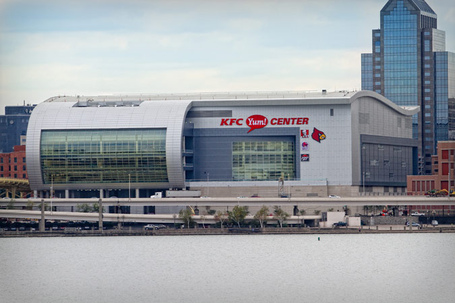 When asked what needed to happen in order for The Bucket to leap into the world top ten by the time the next set of rankings are announced, Pollstar editors said the best thing for the arena would be the addition of a male basketball player whose first or last name was in keeping with the name of the arena itself.

Weird. Somebody should probably get on that though.