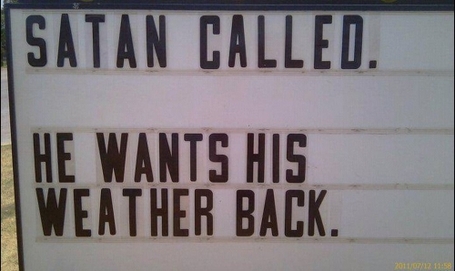 The three biggest points of interests from Rick Pitino's write-up this morning:

1) Russ Smith moving to the two

It feels like transfer rumors have surrounded Russ Smith since the day he arrived on campus, and this news is going to do nothing to end that cycle. It's a surprising turn of events considering the recent pick-up reports from the upperclassmen who all said that Smith was among the summer's standout players. Smith simply isn't going to steal any minutes from either Chris Smith or Wayne Blackshear, so the safe money is on Pitino using this as a teaching mechanism: Pass the ball or you're not going to play.

I wouldn't be surprised if Russ does play the two during the games in the Bahamas since Wayne Blackshear is out, but my guess is that he'll be competing for the backup point guard job again once fall practice rolls around. It really seems like Russ loves being a Cardinal, so I'm not as sold on the possibility of him transferring as others, but I'm not going to toss it out completely.

It's going to be a big few months for the young man from the Big Apple.

It was Terrence Williams three years ago, Edgar Sosa the year after that, and Preston Knowles a season ago; basically, if you make it to your senior year at Louisville, Rick Pitino is going to describe you as being "unguardable" during his preseason practice reports. The man rewards players who are loyal to his program like no one else in the country.

3) Chane Behanan is a beast

Americans wholly embrace women's soccer about as often as Rick Pitino offers up ardent praise for a freshman. Both have now happened in the same month as Pitino says Behanan has "exceeded my expectations" and describes him as a "big-time talent."

This is about as much proof that the kid is the real deal as you're ever going to find.

Peyton Siva was the first player made available to the media to talk about Louisville's first three practices, so naturally the 5-10 minutes Siva spent with Rick Bozich has turned into approximately 1,000 stories on the Internet today.

"Playing against Kemba Walker was actually a good thing for me," Siva said. "Playing against him, it made me realize I’m going to go out and play my best because you don’t want to get embarrassed.

"He never took a play off. Even if you think you’re playing good, you can have one bad play. You can’t take plays off."

Western Kentucky released its 2011-2012 basketball schedule yesterday and revealed that they will be making their trip to the KFC Yum Center on Dec. 23.

WHAS-11's Adam Lefkoe recently spoke with college football guru Phil Steele, who said, among other things, that he believes Teddy Bridgewater will eventually unseat Will Stein as U of L's starting quarterback and that Kentucky will defeat Louisville on Sept. 17.

Someone on the Cardinal football staff found out about Greg Scruggs' Bieber Fever tweet from last week, and decided to print it out and place it on the desk of every coach on the staff.

Scruggs offered up this proof yetserday: 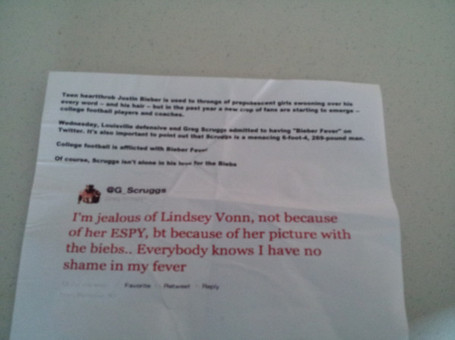 Will Stein is excited about camp. Of course he is.

There is no secret that the main battle heading into camp is the quarterback position. The most attention will obviously be placed on this position, and it’s a battle that will be fun to watch as fall camp progresses. However, you have to love Stein’s approach to the battle as he heads into his fourth season in the program.

"I hear a lot about it," said Stein. "I just focus on my job, and my job is to be a leader on this team. I’m a winner through and through, and whoever is the best person for the job to win to make this program take a step foward, then that is who needs to play quarterback. If that is me, I’m ready for the challenge. If it’s not me, then I will be the best person to help them through that. In my mind, I’m the quarterback and that is how I’m approaching the start of fall camp."

Andrea Adelson says Stein is the 7th best QB in the Big East.

7. Will Stein, Louisville. No Teddy Bridgewater? I think Stein will start the season, though Bridgewater will start. I just cannot predict whether Bridgewater will end up being the full-time starter this season. It is much harder to make that prediction with a quarterback than a running back, for example. Stein has game experience, and has been praised for his leadership. But Bridgewater is the future.

Josh Chichester is No. 3 in her tight end rankings.

3. Josh Chichester, Louisville. Potential is a word that is thrown around a lot in these rankings. Going to use it again here with the 6-foot-8, 240-pound Chichester. It would not surprise me if he ended the season as the top tight end in the league. No question he is going to have a huge role in the Cardinals' offense, especially with questions in the receiving corps.

And a pair of Cards make the cut at running back.

3. Victor Anderson, Louisville. The Cardinals lose Bilal Powell but there is some talent here waiting. If Anderson stays healthy, I think he could be poised for a season similar to the one he had in 2008. He had a terrific spring, and he told me earlier this summer that he finally feels healthy and is determined to end his career with his best season yet.

9. Jeremy Wright, Louisville. I had a tough time between Anderson and Wright because I think both could easily have good years. My expectation is for them to share the load, but Wright is coming off an injury. He is expected to be 100 percent for the fall, but I give the edge to Anderson because of his terrific spring.

According to Mark Ennis (@Mengus22), Louisville has moved Stephan Robinson from wide receiver to corner back. From a position of extreme depth to a position of limited depth. Not a gigantic surprise.

The kickoff for Louisville's Sept. 9 game against Florida International had been listed as 8 p.m. for most of the summer, but that has now been changed to 7 p.m. on the team's official schedule page. That's a Friday nighter.

And finally, Hakeem Smith is the only Cardinal to grace the SB Nation preseaon All-Big East team.