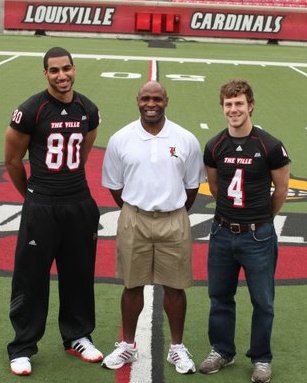 Can't put my finger on exactly why, but I love this picture.

Louisville's Oct. 1 home game against Marshall will kickoff at 3:30 and be carried by WHAS. Better than the noon start time that had originally been rumored a few weeks ago.

If the Cards are 3-0 with a victory over Kentucky two weeks earlier, well, that should be a fun morning.

The Sporting News is higher on the 2011 Louisville Cardinals than any news outlet or preseason publication I've seen, slating the Cards as the 44th best team in the country and predicting that U of L will go 8-4 in the upcoming season.

Why we know we’re right: Things ended so positively for the Cardinals in Charlie Strong’s first season. The first postseason appearance since 2006 ended with a Beef O’Brady’s bowl victory over Southern Miss. Look for the momentum to build this season. Running back Victor Anderson, who rushed for 1,047 yards and eight touchdowns in 2008 but has since been hobbled by injuries, appears healthy and ready for the challenge. He and sophomore Jeremy Wright, who averaged 5.5 yards per carry in limited action last season, should make a respectable duo and help to carry quarterback Will Stein. Stein, meanwhile, will get a strong push from freshman Terry Bridgewater. There’s enough back on both sides of the ball to make Louisville a serious threat in the Big East. Defensively, strong safety Hakeem Smith is among the best in the nation.

I don't have anything listed under "favorite quotations" on my Facebook page (I generally don't enjoy things said by other people), but if I did, this would be it:

Here's the cover for the 2011 Big East football media guide: 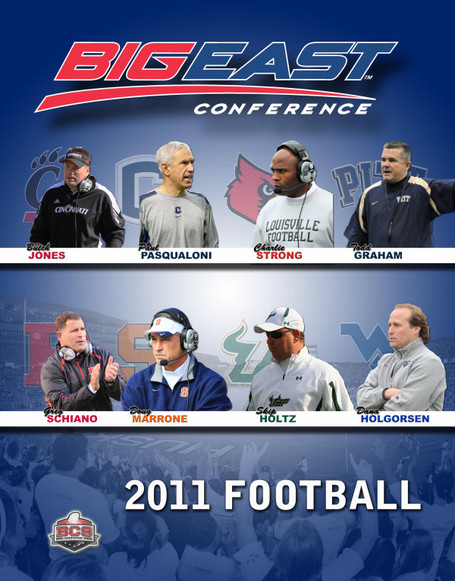 Clearly, Charlie Strong is too much man to be held by the allotted frame size.

On a related note, do you know what happened to the last guy who cut off Strong's left arm when using photoshot? He's dead, bro. He's dead.

And here is the fake SEC media guide cover (via BECB): 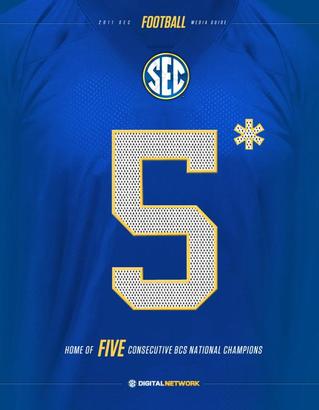 Taylor committed to Louisville during his sophomore year of high school and never wavered, an extreme rarity in this day and age. Because of this alone, I'd love to see him wind up a Cardinal, but that appears to be a long shot at best.

Best of luck to Ryan this upcoming season and beyond.

Rick Bozich looks at the recruiting battle of the Bluegrass currently being waged by Charlie Strong and Joker Phillips.

Sophomore defensive tackle Brandon Dunn is up to well over 300 pounds and could be poised for a monster season.

Andrea Adelson of the ESPN Big East blog says Teddy Bridgewater is the next big thing at QB in the Big East.

Louisville: Teddy Bridgewater, quarterback. Expectations are high for Bridgewater to come in and take the starting job. He could be a starter for four seasons and become the face of the Big East. That is plenty to ask for somebody who is 18, but that is how high the potential is for him under Charlie Strong.

And that Josh Bellamy is the league's ninth-best receiver.

9. Josh Bellamy, Louisville. Receiver is a big question for the Cardinals, but with Bellamy returning, he should be the go-to player for Teddy Bridgewater and Will Stein. He has the size (6-foot, 206 pounds) to make plays and, now that he is going into his second year in the offense, should be much improved.

LSU is in trouble with the NCAA over a recruit who ultimately never suited up for the Tigers.

I hate to sound like a heartless bastard here, but if you're not taking the time to get vaccinated in this day and age - where both information and warnings about Krag1N1 are so abundant - well, you can't really blame anyone other than yourself when something like this happens. 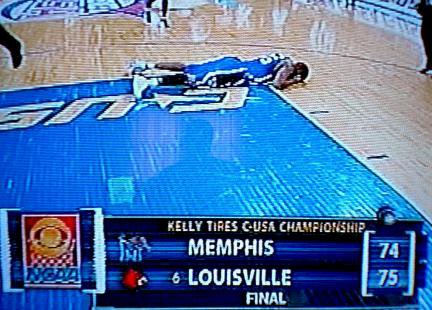 He couldn't even do that right.

The word right now is that at least some of Louisville's exhibition basketball games in the Bahamas will be televised locally.

4. Louisville at Kentucky, Dec. 31 – The Cardinals will be amped up to play their in-state rival on the road – but it won’t matter. Kentucky is simply too talented.

8. Vanderbilt at Louisville, Dec. 2 – On paper this looks like the best Vanderbilt team in recent memory, but all great teams win on the road. If the Commodores get by Louisville their confidence will be sky-high.

13. Memphis at Louisville, Dec. 17 – Memphis’ Will Barton, Tarik Black, Joe Jackson and Chris Crawford should improve immensely between their freshman and sophomore seasons. Still, even veteran teams will have trouble winning at Louisville.

Chane Behanan, how are are you enjoying college life?

And finally, a good story on Earl Heyman and his efforts to make it as a boxer.