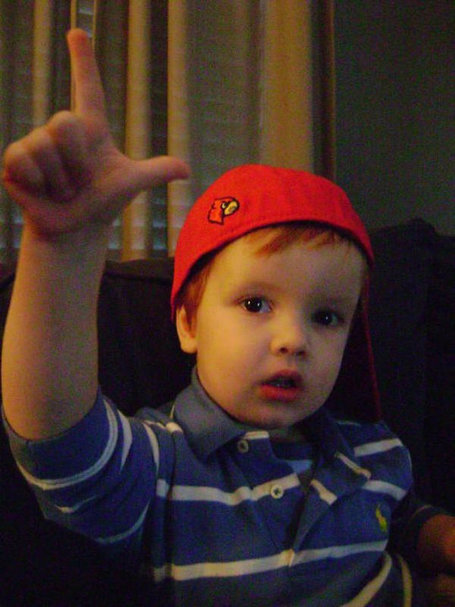 Fresh and ready for the weekend.

We didn't really get a chance to dive into the Pitino post (which we could probably spend three days analyzing) yesterday, so here's a quick look at the three most notable items from Sir Rick's blog entry:

2) Both Wayne Blackshear and Kevin Ware are "finishing up their classes at home." Is this cause for concern? Almost certainly not, but in light of recent events, you'll have to forgive anyone having a mild panic attack. What does, without question, suck about this is that neither one of the freshmen will be making the trip to the Bahamas with the rest of the team. Blackshear was always a question mark due to his lingering injuries, but Ware was a guy who really could have benefited from the ten days of practice as well as the game experience that the three exhibitions will provide.

Probably not a big deal in the grand scheme of things, but the you always want to start a season with all your pieces in place, and this year's season, in essence, will begin in a few weeks without Ware or Blackshear.

3) The relative healths of Swop and Rock are improving. Swop, for his part, has been telling people that he's very close to being good to go, and in Pitino-ese, saying he should be ready by Oct. 1 is as close to confirming those reports as possible. I'll be surprised if Jared doesn't take part in the Red/White scrimmage. Rock being ahead of schedule is obviously good news. Chane Behanan may end up being All-World, but putting that much faith in a freshman is almost always a recipe for disaster. No way Buckles redshirts this year if he's anywhere close to 100%.

Louisville did not receive a commitment from a football player in the class of 2012 on Thursday.

One of the overlooked aspects of playing the Louisville/Kentucky basketball game on New Year's Eve is its affect on local businesses. One can only assume that the game will again be played in the afternoon, which means there will be plenty of folks who decide to get the party started early on in the day and are then unable to keep the party going later in the night. You're also going to have a fair share of fans from the losing squad who nix the idea of going out for New Year's because they no longer have a desire to live. Yeah, the game's a big deal.

Putting the game on Dec. 31 is essentially robbing the state of a holiday. It's like when your birthday is in late December and people give you birthday/Christmas presents. People might chastise you for being selfish if you complain, but they shouldn't, because it's total bullshit.

I know that personally, I shouldn't be allowed to interact with other human beings on the day of the Louisville/Kentucky game regardless of when it's played. So putting it on a day when I'm forced to socialize with lots of people in a public setting and am strongly encouraged to drink liberally is like firing Charlie Sheen and then exiling him to Amsterdam in one eight-hour period. I strongly doubt I'm the only one this analogy applies to.

The only good(?) thing about this year's game being on New Year's Eve is that there's no possibility for football conflict, as the Big East does not have a tie-in with a bowl game played on Dec. 31. So, there's that.

If you missed me on The Early Birds show with Drew Deener this morning show you missed a lot of Chicken Knowles talk as well as an expletive-laced rant directed at Kentucky assistant Orlando Antigua. OK, just one of those. But which one? Yeah, Chicken. Damn, you're good.

I didn't get a chance to demand that Drew refer to Elisha Justice as "the hottest male athlete in the world" during early-season basketball broadcasts next year, but that message will be conveyed at some point. Results will follow.

Each Big East team announced yesterday the players who will be representing their program at next month's Big East Media Days in Newport. For Louisville, those four players are Greg Scruggs, Josh Chichester, Victor Anderson, and Chris Philpott.

Scruggs, Chi-Daddy and Vic all but guarantee a bevy of notable quotes and occurrences. You need to prove yourself a little bit in the comedy department, Chris. Scruggs is consistently hilarious, Vic works on farms, people call Chi-Daddy "Chi-Daddy"...just sayin'. Show me something.

Speaking of media day, USF beat writer Greg Auman unveiled the preseason ballot he will turn in on Aug. 2 when the league tabulates its preseason media poll. Auman slotted Louisville 7th, but his readers, who were also asked to submit ballots, placed Louisville fourth.

Preseason polls are always meaningless, but this year's Big East media poll may end up being the most meaningless of them all. Outside of West Virginia appearing on paper to be slightly ahead of everyone else, the league is just too muddled for anyone to claim a clear vision of what's going to take place in October and November.

Kedrian Reed Jr., the young man with leukemia who was befriended by Peyton Siva, George Goode, and others associated with the Louisville basketball program last spring, passed away Thursday morning at the age of 13. Our thoughts and prayers are with his family.

Always be thankful that you and your loved ones have today, regardless of the circumstances.

Daniel Brown is among the Louisville football players who have been volunteering this week at the Indian Summer Camp for Kids With Cancer. He appears to be enjoying both helping out and spreading awareness about the greatness of No. 24. 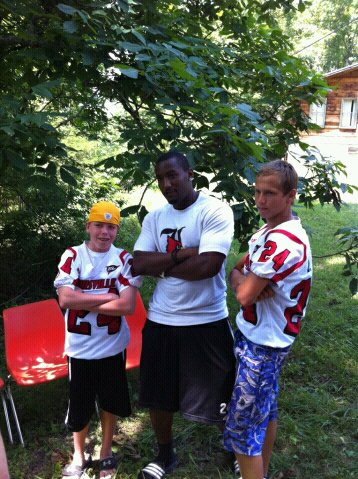 Ryan Dugan is a Louisville fan who managed to make it to the semifinals of Matt Jones' KSTV casting call contest. If you'd like to vote for him, you can do so here.

You wouldn't mind another 2010-2011 Louisville basketball highlight video, would you? You would?...Tough shit.

Last week, WAVE-3 broadcast a story about an arsonist destroying all of the football equipment of the Shawnee Golden Eagles youth football team. Naturally, Super Charlie Strong couldn't refrain from jumping into action.

Peep this photo from the freshly-released 2011 Louisville football media guide: 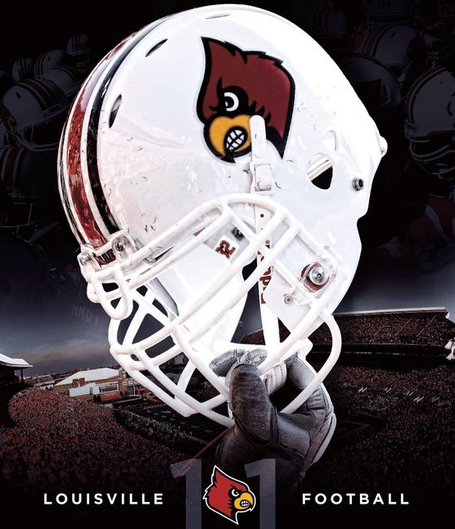 And finally, if you feel so inclined, here's an interview with DaMarcus Smith where he says, among other things, that his life at UCF is a business, that he can throw a football 82 yards, and that he can hit a golf ball almost 400 yards.

Kid would make one hell of a North Korean president if football doesn't pan out.