Greg Scruggs has a fever

Share All sharing options for: Greg Scruggs has a fever

Greg Scruggs is a monster of a man who has only been playing organized football for five years. After spending the bulk of his Cardinal career shuffling positions, he'll finally get a full season at his natural position in 2011, which is defensive end. Many believe he's the best NFL prospect on Louisville's roster and that he has the potential to play his way up to a first day draft pick with a strong performance this year.

Clearly, this is a man capable of serious harm who should be feared by all. 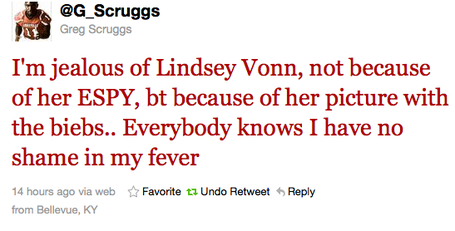 Imma tell you one time: You can't give me enough Scruggs right now.