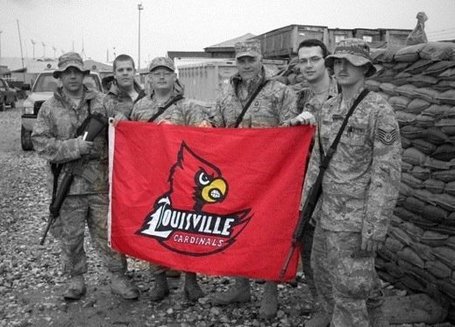 Great shot. Now on to the news...and the notes.

It really is remarkable what Charlie Strong and company are doing in the world of recruiting right now. Not only are they going to out and getting extremely talented kids, they're getting them at positions of need. Lack of talent at corner? Go get one of the nation's best. Lack of depth at quarterback? Go get a kid with an offer from Alabama. Lack of size on the O-line? Go get a 6-6, 315-pounder.

So Strong now has 11 commits in the class of 2012, and the scary thing is that only two of those kids are out of the state of Florida, where the staff - Clint Hurtt, in particular - has been the strongest. If Louisville can get commitments from a couple of the four-star recruits from the Sunshine State that Hurtt is in on, as well as Nick Dawson or another high-profile name, then this class could end up being scary good. 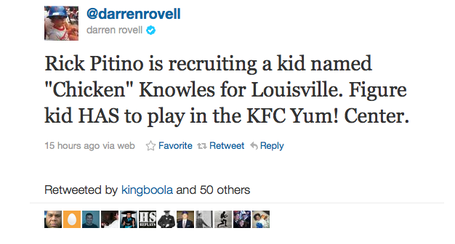 I have no idea where Rovell got this information or what prompted him to tweet it, but yes, I have a massive erection right now.

Congratulations again to the U-15 Louisville Magic AAU team, which really did not receive a serious challenge on its way to claiming a championship at the Kentucky HoopFest yesterday. If you haven't already, check out Sam's shots from yesterday's action (Tony Williams cameo!).

In related news, I heard an interesting story yesterday about Ellis Myles kicking Brandon Bender out of a Magic game earlier this summer. Apparently the 2010-2011 Least Cool Person approached some of the kids before a game, at which point he was told by Myles, "I don't want you anywhere near my guys."

I would have thoroughly enjoyed witnessing what would have happened had Bender not obeyed.

I feel like this only appropriate in light of the U.S. Women's National Team's victory earlier today. 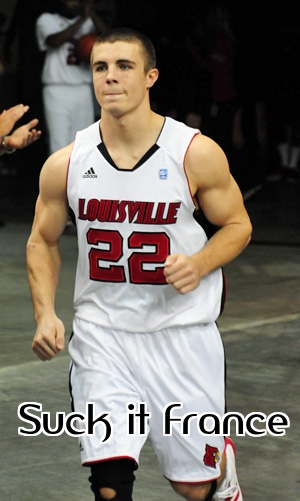 Also, it's interesting to check out how Elisha's most popular Google search words have changed after this summer's events.

Basketball Prospectus has begun its countdown of the top 100 players in college basketball by unveiling numbers 71-100. Cardinal freshman Chane Behanan checks in at No. 81.

81. Chane Behanan, Louisville Fr., PF)
Behanan's usually listed at 6-7, but that's probably generous. There's just an unspoken understanding that a high-major big man must be at least that tall. And Behanan is certainly a high-major big man. At No. 27, Dave Telep has Behanan ranked lower than any other freshman I talk about, but the Louisville forward is absolutely college-ready. I'm testing my recently-published Tier Projection theory under this logic: Big men underperform as freshmen not because they are big men, but because they are ranked highly despite a lack of polish. I picture it like this: If 40 percent of Americans are over six feet tall, 0.25 percent are over 6-6, and one percent are polished basketball players, we're going to end up with a much higher number of polished guards than big men. But the most valuable of those big men will still be just as valuable as the most valuable guards, so they end up being ranked accordingly. All of which is to say that Chane Behanan was ranked No. 27 because he is really about 6-5 or 6-6 and not because he can't score in the post in the Big East tomorrow. Or so I claim with this ranking of him.

The NCAA has reprimanded U of L women's basketball coach Jeff Walz for using "profane and abusive language towards the game officials, individuals seated at the scorer’s table and on the team bench, as well as kicking the scorer’s table during Louisville’s game against Gonzaga at the Spokane Regional."

Freshman center Mike Romano gives us another look at the new football uniforms: 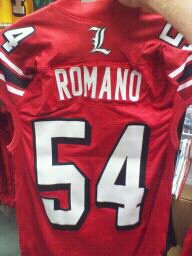 It's been known for about a month now, but Athlon officially announced to the world yesterday that it believes Louisville will finish last in the Big East this season.

1. Charlie Strong, Louisville. Strong waited long enough to become a head coach and after his successful first season, he made quite an impression across the country. Eddie George even mentioned him as somebody he would like to see at Ohio State. What I am most interested to see is how he handles Year 2 with a green team lacking the senior leadership he had in 2010. Still, Strong remains an up-and-coming coach to definitely watch.

U of L updates us on how the individual baseball Cardinals are doing in their various summer leagues.

Alabama fans spent a decent chunk of yesterday and this morning invading this blog and U of L message boards in order to spread the word that even though Will Gardner had a scholarship offer from Nick Saban, he was actually the Crimson Tide's "third choice" at the position. In essence, he would up at Louisville because a school that thought highly enough to offer him a free ride didn't actually want him that badly. 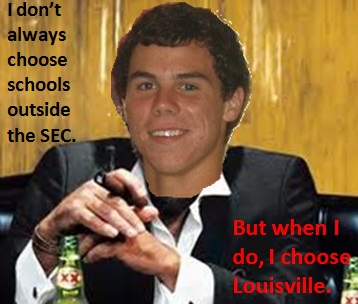 And finally, Mario Benavides has been named to the Rimington Trophy watch list. The award is given annually to the nation's top center.