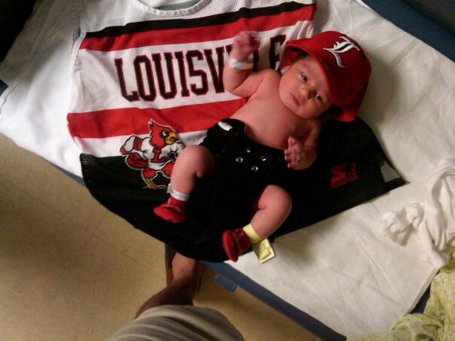 The big news (in the absolute loosest sense of the phrase) as we begin the week remains Tyler Gabbert's peculiar decision to leave Louisville after being on campus for less than a week.

The reaction to the news from across the Midwest has been surprisingly high, and a quick glance at various Big 12 and Big 10 message boards gives a clear indication that the Gabbert family isn't particularly popular in that part of the country. Add in the fact that C.L. Brown has stated on his blog that Gabbert's decision to transfer to Louisville was made by his father and not Tyler himself, and this appears to be a "more trouble than it's worth" situation that the program narrowly avoided.

Even if Gabbert - or, perhaps more accurately, the Gabbert family - had the potential to be a negative distraction, I still err slightly on the side of viewing his departure as bad news. It's not anything close to a program-changer and will almost certainly be largely forgotten once actual football starts being played, but Louisville is undeniably thin at the quarterback position right now, and Gabbert isn't without talent. Charlie Strong is now in a position where he needs to sign at least one capable signal caller in the class of 2012, especially if he's serious about Dominique Brown switching positions next season. It's a situation that Gabbert's transfer would have prevented.

Kentucky continued its recent custom of extending scholarship offers to players Louisville offered just days before when it told class of 2013 point guard Kasey Hill on Sunday that he could play basketball for free in Lexington. UK also offered class of 2013 stud Malik Price-Martin as well.

If this weren't enough, Kentucky is also one of the schools that has offered a football scholarship to one of U of L's top 2012 targets, Gary Harris. It's only a matter of time before the subtlety in this war dissolves and a giant billboard of a middle finger goes up somewhere on I-64.

According to ESPN's Big East blog, Louisville has the worst cornerbacks in the conference.

8. Louisville. The Cardinals have major problems at cornerback. They lose starters Johnny Patrick and Bobby Burns, and Darius Ashley is suspended indefinitely following his second DUI arrest. Jordan Paschal, Anthony Conner and Preston Pace are in the mix. Freshman receiver Charles Gaines was moved here in the spring to provide some relief. But this is a major area of concern. 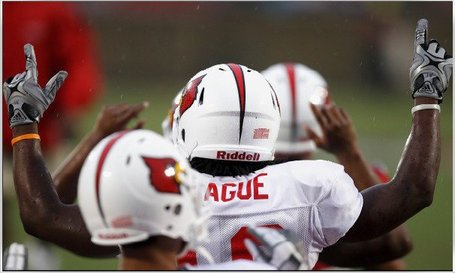 According to himself on Twitter, two-time Louisville commit and de-commit Tyrone Pearson is now back at Seneca High School and wants to play his college ball for the Cardinals. Pearson, who had moved to Indianapolis earlier this summer and was planning to finish his high school career there, was also saying just a couple of months ago that he was going to Central Florida and was planning on getting a UCF tattoo. The kid's an elite talent, but he's never going to be in the news for anything positive if he doesn't mature significantly over the next couple of years.

Chicken Knowles took part in the Great American Shootout on Sunday, and now has the folks at Rivals thinking they may not have been generous enough when they debuted him at No. 58 in their latest set of individual rankings last week.

When inserting Chicken Knowles into the rankings, we were pretty aggressive and started him off at #58 in the class of 2012. Ultimately, that's probably going to end up a bit too low as the 6-foot-9 Knowles is one of the most intriguing prospects in the country. His size would say that he's a power forward, but the more we see him and the way he can face up, shoot and attack off the dribble with fluidity, we can't help but see a guy that projects as a long term small forward. He didn't even play that well in the game were able to watch, but it's impossible to not see his potential.

I don't even have to say it.

With the Louisville Magic's championship run in the U-15 division at the Adidas Invitational last week, it is clear that the Louisville-area finally has some top-level talent again. D'Angelo Russell (Central) and Quentin Snider (Ballard) figure to be among the city's best players for the next three years and should develop into nationally-known names.

And finally, Adam Zagoria has video of D'Vauntes Smith-Rivera at the Lebron James Skills Academy, and when asked which schools have been recruiting him the hardest, DSR does not name Louisville. A bit troubling since the recent consensus has been that Smith-Rivera is Rick Pitino's top target in the class of 2012.