The King Stay the King...Simpson's style.

Pitino's done this before, but that's not to say he doesn't have a legitimate beef here. Pitt and Syracuse both figure to join Louisville in the league's preseason top four - if not top three - which means the Cardinals having to play each twice shouldn't happen if the scheduling is truly balanced. That said, there's no way to do this in a scientific manner that's completely fair to all 16 teams, and there's no way to know for sure that both the Orange and Panthers are going to live up to their preseason billing.

It is what it is.

ESPN takes a look back at June and a look ahead to July in the world of college basketball recruiting. I'll give you one guess as to who their "sleeper on the rise" is.

Sleeper on the rise
One of the guys I'd personally like to see a lot of this summer is Danrad Knowles (Houston/Home School). "Chicken" is a wiry thin, skilled combo forward with a big upside. He made a strong impression in the spring and was a standout at the NBPA Top 100 Camp. Now the big lights of July are on him and the stands are going to be packed with the guys who control the scholarships. No way Chicken lays an egg in July, right? As for other sleepers to watch, pay attention to guard Christian Sanders (Houston/Saint Thomas), power forward Devin Thomas (Harrisburg, Pa./Central Dauphin), forward Skylar Spencer (Los Angeles/Price) and center Mike Hall (Atlanta/Woodward Academy).

For those uninformed about the craze, "planking" consists of lying face down in an unusual or incongruous location with your hands touching the sides of your body. You then have someone take a picture and post it on the Internet. 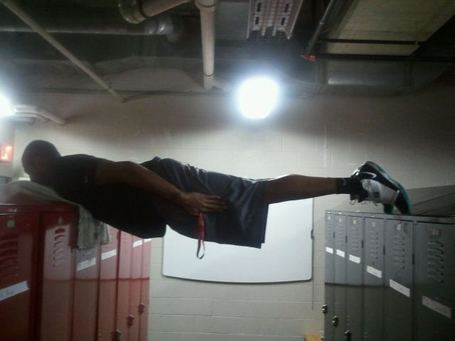 Cardinal Dominance is saying that Gerod Holliman may not have qualified and could be headed to prep school. If true, it's highly disappointing because he's one of the few freshmen with the potential to contribute right away.

In better news, both Mike Romano and Eli Rogers are now on campus, making Holiman the only freshman to have not yet reported.

A jury found today that Central Florida was at fault in the death of former player Ereck Plancher, and awared his family $10 million. Dennis Dodd says both AD Keith Tribble and head coach George O'Leary should resign or be fired, but we all know neither will happen.

Andrea Adelson is continuing her Big East unit rankings, and says Louisville has the 7th best group of quarterbacks;

7. Louisville. This ranking is a mere reflection of the uncertainty around the position. The Cardinals and Huskies are the only two teams with this position unsettled, hence the rankings. There is no denying the potential that Teddy Bridgewater brings. But he is a true freshmen, and true freshmen are simply wild cards. Will Stein is steady, but is he the man to guide this team to a league championship? Both will play, but who is going to step up and take charge?

3. Louisville. A few fans wondered why Josh Chichester was not included in the receiver rankings. The reason is because he will be playing more tight end this season, according to offensive coordinator Mike Sanford. That should bode well for the Cardinals. Chichester is a 6-foot-8, 240 pound big-time target who had 317 yards and five touchdowns last season and should help make up for the loss of Cameron Graham. Sanford also is expecting big things from Stephon Ball and Nate Nord.

The NCAA Football 2012 game is about to be released, and here are Louisville's top ten players in terms of rating on the game:

And finally, LeBron James might not be able to win an NBA title, but that doesn't mean he can't still dunk on and knock over little kids.